by Tactical Life
in Uncategorized
0 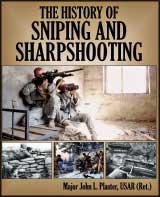 The History of Sniping and Sharpshooting is Major John Plaster’s second book on precision military marksmanship, with the first being Ultimate Sniper, An Advanced Training Manual for Military and Police Snipers. As a three-tour Vietnam veteran of the elite SOG (Studies and Observation Group), the author is a hardened combat vet who knows the value of accurate rifle fire.

The book essentially starts with the French and Indian War period of American history and works its way up to the present. All sections give accounts of historical situations where a single round changed the course of a battle. The capabilities of each period’s weapons, ammunition, and sighting systems are discussed in detail. A large number of period photos and other illustrations are also used to document each chapter. As a lifelong user of scoped rifles, I never ceased to be amazed at the marksmanship accomplished by past military shooters with what seems like totally inadequate equipment.

If there is one point I think the author may wamted to question was the “confirmed kill” list of many past snipers. It was not uncommon for WW-I and WW-II snipers to supposedly have confirmed kills in the hundreds. Think about it. A sniper takes a shot at an individual at extremely long range. It doesn’t matter whether the target is killed, wounded, or totally unharmed, he is going to drop and seek cover if he can. Only in very rare situations will the sniper be able to close that distance and truly confirm the results of his marksmanship. Obviously, it is a historical fact that many troops have been KIAed by snipers, but I suspect just as many “confirmed kills” were either wounded or completely missed.
This is probably the best history of military sharpshooting and sniping in print. I highly recommend it.