Before the FBI busted a group of six would-be terrorists in early May as they planned an attack on Fort Dix in New Jersey, many Americans couldn’t envision a domestic need for the Boomerang III, a high-tech mobile system that detects a gunshot’s shock waves and pinpoints the shooter’s location.

The Boomerang system was developed and manufactured by BBN Technologies (BBN) of Cambridge, Massachusetts. It uses passive acoustic detection and computer-based signal processing to detect enemy shooters. More than 700 of these devices have been shipped to Iraq and Afghanistan since the system’s development in 2003. The Boomerang_which is a compact array of mast-mounted microphones_is mounted to buildings, Humvees, Stryker armored vehicles and even hand-pulled carts to help U.S. soldiers and Marines locate shooters within a second of the shot. It works with more than 95% accuracy whether it’s used in close-up urban settings or in open rural areas where it zeros in on shooters firing from their weapons’ maximum ranges.

And now with the Boomerang III, the system’s third generation of working models, BBN Technologies is working with the U.S. military to expand its use even further. In addition to developing a Boomerang that can be carried on a fighter’s back, they are developing units that can be used on combat helicopters and Navy watercraft. It’s also developing a Boomerang that can detect the launch sites of mortars and rocket-propelled grenades, whose projectiles travel at far slower speeds than rifle bullets.

Rapid Development
Mark Sherman, BBN’s vice president and manager of the Boomerang project, said BBN began developing the Boomerang when the Defense Advanced Research Projects Agency contacted the company soon after the Iraq conflict began more than four years ago. Enemy fighters were shooting at convoys, “walking” in rounds from their AK-47s on the noisy vehicles. Our soldiers and Marines were often unaware they were under attack until bullets hit them or their vehicles.

BBN had the first Boomerang ready to show off 66 days later. The Boomerang removes the element of surprise because it pinpoints the shooter with the first shot, giving our soldiers the shooter’s distance, elevation and azimuth (angle) from their location. It’s more than 95% accurate on bullets of .20 to .50 caliber, and tracks only incoming bullet trajectories passing within about 30 yards of its mast. When U.S. fighters shoot back, the Boomerang doesn’t activate. It can be used day or night, in fog, rain or snow, and even in sandstorms.

In 2005, the Boomerang won DARPA’s “Significant Technical Achievement Award” and an MITX award from the Massachusetts Innovation & Technology Exchange.

No “False Positives” & Affordable
The more our military uses the Boomerang system and evaluates its widespread effectiveness, the more BBN expects to refine its product.

“Our approach has always been to take our products to the end-user and learn how they want to use them,” said Sherman. “The first group to use the Boomerang was the Marine Corps, and they put them on their Humvees. Then they took them off those Humvees and used them at fixed sites where they were getting shot at. As more Boomerangs arrived, they found even more uses for them.”
“It’s gratifying to receive so much positive feedback from our soldiers and Marines,” Sherman continued. “Securing a site’s perimeter means sending out soldiers to look for intruders and to keep watch. Those guys are always taking fire. Now when someone shoots at them, they can zero in on the shooter in less than a second. We like to compare the Boomerang to air bags in cars. When air bags first came out, they were viewed as options. Now they’re standard equipment. We want the Boomerang to be standard equipment on every vehicle in the military. These devices are saving lives wherever they’re in use.”

Boomerangs are now in place not only on Humvees, Strykers and other military vehicles, but also at checkpoints and atop the walls of compounds, hospitals and other military installations. These units are relatively inexpensive, at $15,000, and can be used in conjunction with a variety of weapons systems. When the Boomerang detects a shooter, it can alert the command as the weapons system simultaneously slews its gun(s) to the shooter’s position.

Another of the Boomerang’s attributes is its lack of false alarms. Because the system keys on supersonic noises_and can detect them over the roar of large engines and heavy equipment_it isn’t fooled by road bumps, slamming doors, strong winds, honking horns and other loud, but harmless sounds. False positives, simply put, are not what users want or get!

Moving Forward: Protecting Civilians
Looking ahead, the Boomerang will likely be included in defensive plans to protect embassies and military installations worldwide, as well as domestic sites such as military bases, water-supply plants, nuclear-power plants, or even sporting venues.
“Everyone has to think about threats that didn’t exist 20 years ago,” Sherman said. “The fact is, the market for this technology is much bigger than where our troops are now getting shot at in Iraq and Afghanistan. I can envision setups where there will be remote displays to detect if a guard shack is taking fire, or if a chemical plant comes under attack. The Boomerang could be used to help escort VIPs as they travel, or to enhance event security for things like the Super Bowl. By integrating them with other security measures, they can provide more security than ever.”

Early Success Stories
Soon after the Boomerang mobile shooter-detection device went to Iraq, the U.S. military installed a system at a hospital complex where an enemy sniper shot at anyone leaving the compound. That changed one night when the Boomerangs were installed under cover of darkness. With the Boomerang’s help, that particular sniper was put out of service the next day.

Meanwhile, in Afghanistan, a mobile demolitions team came under fire every time team members left their vehicles to locate and destroy IEDS (Improvised Explosive Devices) along roads. Soldiers were especially vulnerable, because they had to be 100 yards from their vehicles to do their work, which also put them 100 yards from the Boomerang. With this, BBN developed a transportable Boomerang the soldiers could pull behind them on a cart. Once they could get instant locks on the shooter’s location, roadside sniper activity dropped significantly. 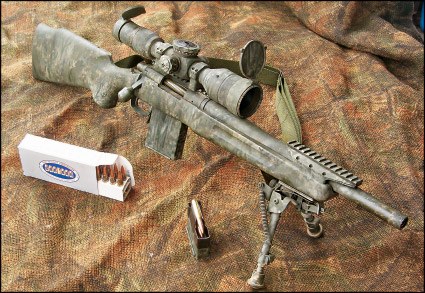