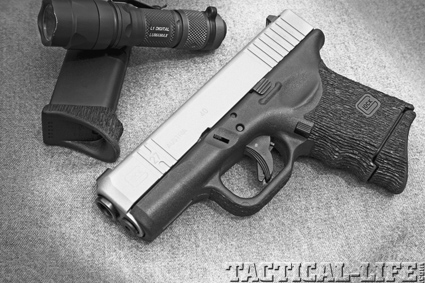 The Glock 27 sub-compact was customized by Bowie Tactical Concepts, and was 100% reliable and deadly accurate.

Though derided by some macho men as the ‘baby Glock’, the Glock 27 and it’s brother the Glock 26 are two of the most popular models from the Austrian gun maker, and for good reason. The sub-compact G26 and G27 were logical additions to the line more than a decade ago when they were introduced. While some, admittedly myself included, were slow to accept them, their reliability and combat accuracy have turned them into the new standard for police back-up guns and civilian carry.

The G27 packs a payload of nine plus-one rounds of .40 S&W ammunition. That’s twice that of a snub-nosed revolver for relatively the same size. During the dark times of the Clinton Era when lawful gun owners were limited to 10-round magazines, a G27 filled with 10-shots seemed a practical choice over a larger G22 with basically the same round count. Today, the G27 excels as a concealed carry or back-up piece.

Custom Details
How do you take a rock solid, reliable factory gun and make it better? Well, if it’s a polymer framed pistol you can send it off to David Bowie (the gunsmith, not the singer). When Chris, a good friend of mine, told me that he had just purchased a G27 and wanted to have it upgraded, I did not hesitate to make a recommendation.

For the last decade or so, Bowie—a Sheriff’s Deputy, SRT team commander, and firearms instructor for Tactical Defense Institute—has been applying his own unique touch-ups to the Glock and other pistols with polymer frames.

One of the chief complaints that some shooters have had with the Glock pistol is the square or “boxy” frame feeling. This is a bit of a Coke versus Pepsi debate, some like it, some don’t. For those that desire a grip reduction, Bowie has you covered. He ever so slightly rounds the edges and removes unnecessary polymer, such as the triggerguard’s hook, and adds his own brand of stippling. 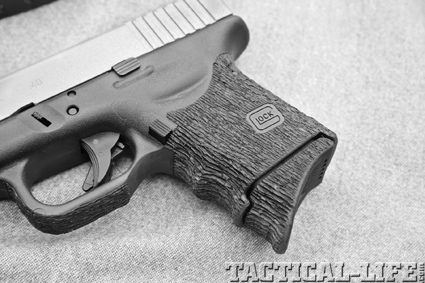 For the uninitiated, stippling is a process of “roughing up” the grip surface to create a greater texture. Back when we all carried steel framed pistols, the checkering process was used. Twenty and 30-lpi (lines per inch) checkering was the standard. The Bowie Tactical Concepts stippling adds texture that quite frankly is hard to let go. When you wrap your hand around the grip of a Bowie pistol it’s not going anywhere.

Bowie performed what he calls a “360” stippling job on the pistol frame as well as the magazine floorplates. He also recessed the area where the triggerguard meets the frame to provide space for the middle finger of the shooting hand.

Moving up to the slide, David again removes some corners and square edges. At the front of the slide he performs a “radius” job and rounds out the full-sized and compact Glock pistols. Glock has taken care of that step on their sub-compact pistols. While Bowie had the G27 in hand he machined forward cocking serrations into the front of the slide. A ceramic based matte stainless steel coating was applied as well.

One of the most notable interior upgrades was the feed ramp polishing. The feed way on the G27 chamber literally looks like a mirror. If you like, Bowie can also do a very nice trigger job on the Glock. The Ghost Trigger is an excellent addition. 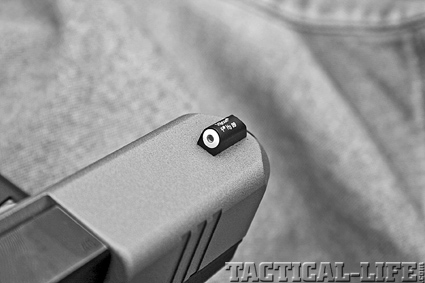 The XS Big Dot Tritium is the front sight for personal defense.

Chris’ expressed desire for his G27 was to carry it as a concealed carry defensive pistol. The factory sights on the gun, while functional, needed some upgrading. If you are going to carry a gun to protect your life against two-legged predators, the XS 24/7 Sights is on of the top choices.

Before shipping the gun, Chris went online and ordered a set of the Tritium Big Dot sights from XS Sights. In a nutshell, XS Express Sights give you exactly what you need on a defensive gun; they put a large, easily visible aiming point right out in front of your eyes.

Mortal combat will not be square range shooting. You can’t wait until the weather is nice and the sun is shining brightly. The front sight is the important one and you need to be able to find it in a fraction of a second under the worst of conditions. That is what the XS Big Dot is all about. 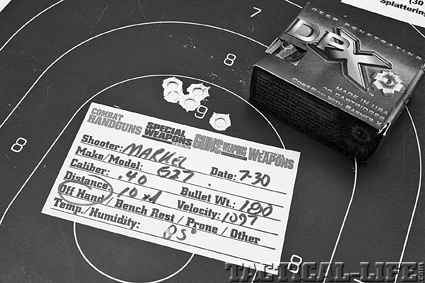 Range Time
For my range outings I would focus on both defensive and practice ammunition from CorBon, Federal, and Remington. Range chores were typical. Chronograph first and shoot for record second. Benching the G27 didn’t really seem to be a practical endeavor so I fired all my test groups from ten yards with a standing two-hand hold.The accuracy was more than acceptable. I knew immediately that as long as I held the big white dot in place on the target those rounds would go where they were supposed to go.

I worked with the G27, punching rounds into a silhouette from contact distance all the way out to around 20 yards. No big surprises were found. The gun went bang each and every time and the rounds impacted in the center of the target.

Staying with the thinking that defensive pistols are used under the worst of circumstances and shot from the most awkward and hasty positions, I decided to challenge the baby Glock.

I’ve been carrying a .40 S&W duty pistol for better than ten years now and, like many shooters, I have a can full of mixed factory ammo. This can contained .40 S&W ammunition from various manufacturers. All manner of controlled expansion rounds and full-metal jacketed bullets were present. Weights varied from 135- to 180-grain. Dipping into the can, I load both nine-round factory magazines with the mixed batch of .40 S&W ammo. 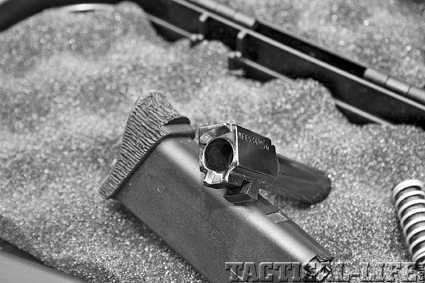 Bowie polished the chamber and ramp to ensure reliable feeding.

For my next trick I decided to hold it sideways, ejection port up, in my right hand only and then rotated it all the way over. Ten rounds later, zero stoppages. Finally, I held the G27 in my left hand only, tipped it over as close to 180 degrees as I could without breaking my wrist and fired a full magazine of ammunition. The pistol was redundantly reliable.

Final Notes
Okay, so a Glock pistol functioned 100 percent without a single stoppage, nothing earth shattering there and you can’t say I didn’t try. The gun consumed each and every round that I fed it without so much as a hiccup. Even held inverted in my weak/off hand, the gun cycled each and every time I pressed the trigger.

The .40 S&W cartridge is indeed a snappy, high pressure round and when fired from a compact pistol it does offer some recoil. The stippling applied by Bowie Tactical Concepts allowed for such a solid hold on the gun that it remained rock solid in my hands throughout.

Combine a solid factory gun like the G27 with some practical custom upgrades from BTC and you have a reliable, accurate, and good-looking defensive pistol. 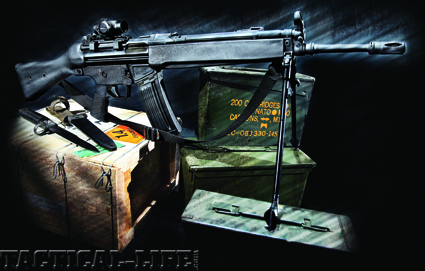 The Glock 27 sub-compact was customized by Bowie Tactical Concepts, and was 100% reliable…