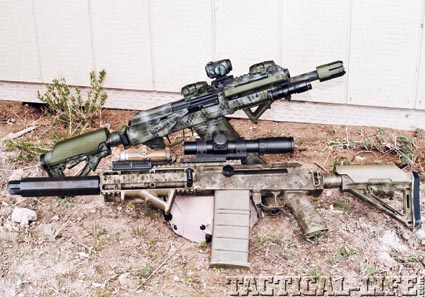 Bravo 18 is dedicated to producing combat weapons built on the AK platform. Made with input from actual operators, Bravo 18’s weapons are rugged, reliable and ready for hard use.

The owner of Bravo 18 has an extensive tactical background. And the guy that builds Bravo 18’s weapons, Steve Palano, is a former Army Ranger and veteran of the Gulf War and a few other operations. Bravo 18 tries to accommodate those looking for SOPMOD-compatible AK-based weapons. These systems are not for purists, who consider any change to the original Kalashnikov design an issue. Bravo 18 weapons are purpose-built systems, based on input from those who fought with (or against) AKs in the real world.

Custom Features
All Bravo 18 systems have similar custom features. The most noticeable is the forend design, based on the need for SOPMOD compatibility. Along with the usual four rails, two more are added—one at one o’clock, the other at eleven. These rails accommodate secondary sighting systems and operating controls for laser systems, tactical lights and thermal weapons sights. Made from forged aluminum, they are lightened as much as possible without compromising strength. Installation of this rail removes the standard sighting system and replaces it with a rail that extends beyond the dust cover. This allows for the addition of any AR-style BUIS, red-dot or optic, without affecting the ability to remove the dust cover for cleaning and maintenance. The Bravo 18 forend covers a modified gas system, depending on the length of the barrel. Pistons are each tested to reliably function with the widest possible types of ammunition. 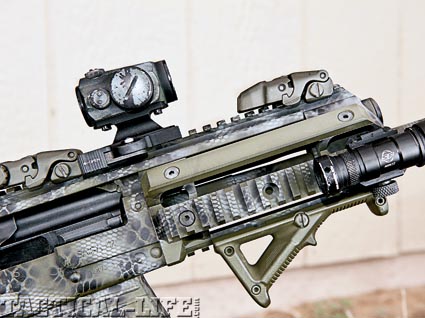 Bravo 18’s patented forend design includes a top rail that extends over the dust cover, allowing operators to mount optics while still being able to access the dust cover.

The following features come from Steve Palano and Luke Steinberg’s experience. The standard right-side handle is removed, leaving enough to safely hold the bolt open with the modified safety lever. This lever is notched to allow the bolt to be held open when empty. A ledge is attached to the safety for one-handed operation with the trigger finger. A knob is attached to the left side of the weapon for bolt operation. The operator can easily operate the bolt with the weapon downrange, while keeping the control hand in place. This speeds up magazine changes and (infrequent) malfunction clearances. It is also much easier to operate in prone or in full kit. In the case of the AK-47 and AK-74, a right-side magazine release is added as well as a magazine funnel, permitting ejection of drop-free magazines with one hand. The Saiga .308 and shotgun systems make this a little more problematic and are not included unless specifically requested by the buyer. 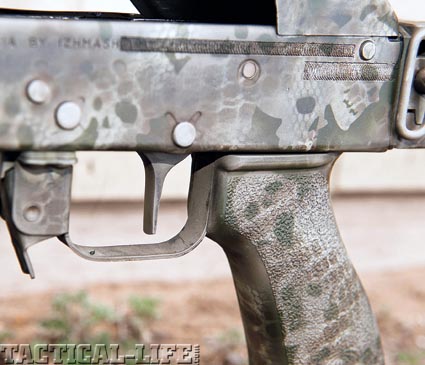 The trigger mechanism is completely polished for a crisp and clean brake. It’s strong enough for hard use yet maintains precision. 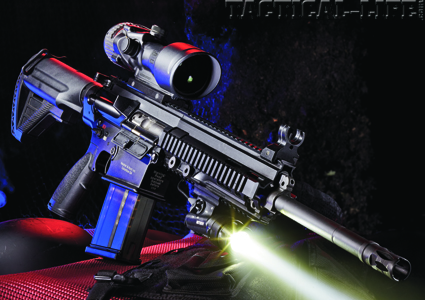 Bravo 18 is dedicated to producing combat weapons built on the AK platform. Made…