When we discuss the direct gas impingement AR-style rifle, there are currently three different gas system lengths available. Most shooters are familiar with the rifle-length or A2 style. Of course, there is the shorter-length M4 version that seems to be the most prevalent of the three. However, many gun folks don’t realize that there is a mid-length or middle option.

Downsizing the 20-inch-barreled M16A2 to the 14.5-inch M4 Carbine naturally required shortening the length of the gas tube. The jury is still out regarding whether or not the shortened tube has increased the gas pressure to the point where it has caused reliability issues. I don’t intend to fight that battle here. Nonetheless, the more I work with mid-length gas system ARs, the more convinced I am that they are the way to go at least as far as carbine-length guns are concerned. For military/LE and SBR guns with barrels less than 16 inches, a short gas tube is simply par for the course. However, when we are discussing standard AR carbines with 16-inch barrels, the mid-length gas system would seem a logical choice. 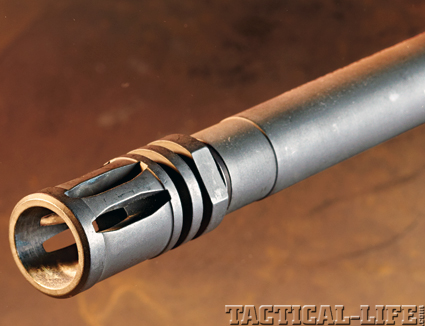 Another standard mil-spec feature is the A2-style muzzle brake/flash suppressor at the front of the chrome-lined, 16-inch barrel.

Bravo Company has become the one-stop AR shopping center. Most readers will be aware of the fact that you can purchase almost every part made for the modern Stoner-based rifle from BCM. What you might not realize is that Bravo Company also sells completed rifles and carbines that are built with great attention to detail, like the BCM MID-16 Mod 0 featured here. 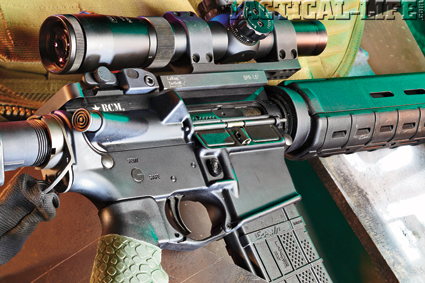 The author equipped the MID-16 with a Hi-Lux CMR 1-4×24 optic as well as a SLAP single-point sling attachment plate.

The BCM MID-16 is chambered for a true 5.56x45mm NATO. As the name would indicate, this particular long gun has a 16-inch barrel and mid-length gas system. A full-thickness barrel is used, as opposed to the ubiquitous M4-contoured version. The barrel also features a 1-in-7-inch twist rate with a chrome-lined bore and chamber. The muzzle brake/flash suppressor is standard A2 spec.

A Magpul forearm surrounds the barrel. Up front is a standard A-frame front sight housing with quarter-click elevation adjustments. Affixed to the flattop rail is a Yankee Hill Manufacturing flip-up/fold-down adjustable rear sight. As you would expect, the charging handle is a BCM Gunfighter model. All manual controls are standard AR configuration. 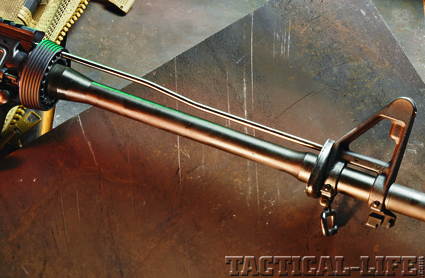 The MID-16 employs a mid-length, direct gas impingement system of operation concealed under a Magpul handguard

The six-position retractable stock and pistol grip are standard M4 design. Directly in front of the standard AR pistol grip is a Magpul MOE enhanced triggerguard. The upper and lower receiver bodies are 7075-T6 forged aluminum components. The trigger is standard AR, but it had a crisp feel. There was no slop or play in the trigger press.

Before heading to the range I wanted to add just a couple of items to the BCM MID-16 carbine. The first item would be a single-point sling adapter. However, this was no ordinary adapter; this was the SLAP (Single Loop Ambidextrous Plate) available from ikickhippies.com. The SLAP is genius in its simplicity. This replacement back plate for the M4-style carbine allows the end-user to attach a single-point sling to his or her gun with nearly any common hardware, including the Mash hook, Clip hook, HK hook, etc. If you don’t have some type of hook hardware for your sling, the SLAP plate is wide enough to thread a 1-inch sling through. With the new adapter in place, I attached a BlackHawk single-point nylon sling.

Recently, I also picked up a couple of new TUFF1 gun grip covers. They are essentially soft rubber grip sleeves that slip over your hard plastic pistol grip. The TUFF1 cover offers a bit of sticky texture and cushion to the standard plastic grip. They are easy to install and naturally less expensive than completely replacing your pistol grip. TUFF1 grips come in various colors and grip designs, such as the Double Cross, Boa (snake skin), and Death Grip (skulls).

My friend and fellow gunscribe, David Fortier, recommended a new optics company to me a few months ago, and this gun test was my first opportunity to give the scope a thorough field test. The riflescope came from Hi-Lux Optics, the parent company of Leatherwood Arsenal. The model featured in this review is the CMR 1-4×24 variable-power riflescope. The CMR uses a 30mm tube and, as the name would indicate, adjusts from 1 to 4X magnification with a 24mm objective lens.

It is the CMR reticle that makes this particular optic unique. This reticle was designed for close- to medium-range engagements, the kind you might anticipate with a 5.56mm rifle. The CMR reticle varies from the norm, as it is not only includes vertical and horizontal ranging lines but it also has a central focal point with an open circle. The circle and dot can be illuminated with a green light. To mount the CMR scope to the BCM carbine, I chose a LaRue QD 30mm scope mount.

To give the MID-16 carbine a thorough workout, I decided to use four different loads from as many manufacturers. Ammunition came from Federal American Eagle, Black Hills, Century Arms, and Hornady.
Step number one would be to knock out the chronographing chores. All the ammunition produced the speeds that I would have expected, including the true 5.56x45mm load from Century Arms’ Hot Shot.

The next range chore would be to zero the CMR riflescope at 100 yards. Using the Black Hills 55-grain FMJ load, I was able to dial in the scope with about 10 rounds. The external target knobs on the scope are 0.5-MOA adjustable. Settling in on my range pack, I took my time and fired numerous slow-fire shot groups.

While shooting for record, I dialed up the scope to the highest magnification possible: 4X. I was able to check the bullet impact on target with my 10X binoculars. After several strings of fire, I retrieved my “Dirty Bird” bullseye targets. I was very pleased with the results and actually a bit surprised. Though you can refer to the table for all the details, I will report here that every load easily posted groups tighter than 2 inches on paper. Considering the 16-inch factory barrel, stock trigger and 4X scope, these were superb results.

What was even more surprising was that the Hornady steel-cased ­ammunition posted the tightest group; not by much, but it did nose out the others. Most people will immediately consider lacquered steel-case ammunition as “cheap range fodder” and not precision ammo. My personal testing showed, at least in this case, that is not a fair assumption at all. Satisfied that the gun and scope combination were zeroed properly, I moved on to more exciting shooting: steel targets.

On one of the ranges I currently use, they have very conveniently placed reactive steel targets out at distances from 100 to 500 yards. These targets are in various shapes and designs from a simple 8-inch circle plate to half-size silhouettes, and even a few animal shapes, including a ram, deer, and hog.

Engaging steel targets from 100 to 200 yards was simple enough with a normal center hold. Moving beyond 200 gave me the opportunity to use the CMR reticle and calculate the hold-over. Banging steel at 300 and 400 yards was easily doable with the correct hold on target.

Before sitting down to pen this piece, I took the Bravo Company MID-16 carbine to the range on several occasions. Sometimes I’d shoot long distance and other times I’d remove the optic via the QD mount and simply use the iron sight for close-in work. The scope held a constant zero for the entire review process. 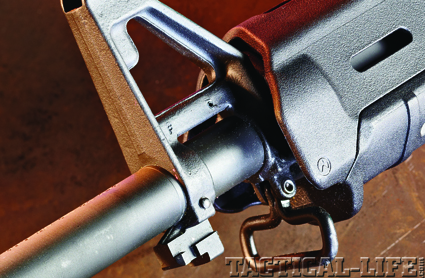 As far as the function and feel of the gun, I did not experience any failures or stoppages. The rifle was fed with both mil-spec aluminum 30-round magazines and Magpul PMAGs. To carry spare ammunition, I used a Ten-Speed Chest Rig from Blue Force Gear.

When comparing the short M4 gas guns to mid-length carbines, the felt recoil impulse and the cyclic rate have a distinctively different feel. It’s difficult to put this into words because, after all, perception will vary from one person to another. In my hands, I would say that the recoil or impulse from the mid-length gun seems a bit less severe or more controlled. This is only a slight difference, but a difference just the same. The MID-16 also seems to be just a bit more controllable during rapid, multi-shot engagements. In the end, this is simply something you will have to try out for yourself. For my part, I am convinced that when it comes to a 16-inch Stoner-style rifle, the mid-length gas system has merit and could just be the way to go.