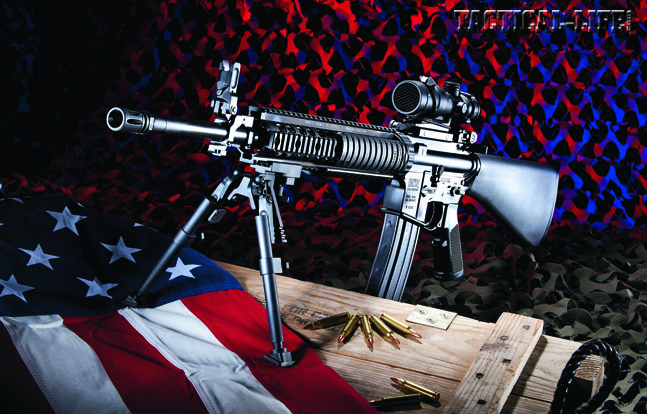 1 of 5
Bravo Company USA’s World of Warriors 1
Built for Marines by Marines. The BCM SAM-R is completely Mil-Spec. With its KAC free-floating handguard, M4 feed ramps and a reliable rifle-length gas system, the SAM-R is a precision 5.56mm weapon made for America’s bravest. 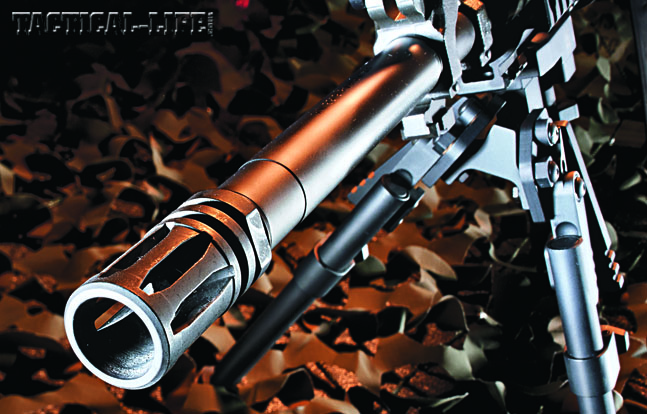 2 of 5
Bravo Company USA’s World of Warriors 2
BCM’s SAM-R is Mil-Spec from barrel to stock. The 410 stainless barrel is treated with IonBond Black DLC to cut the shine, the lower is ready for RDIAS installation of an NFA-registered auto sear, and the railed forend has lots of real estate for accessories. 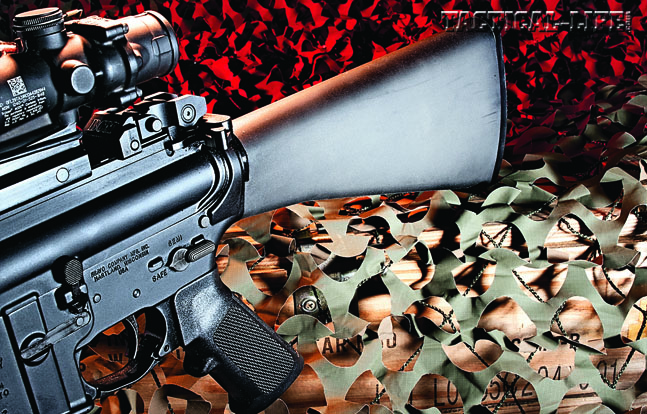 3 of 5
Bravo Company USA’s World of Warriors 5
BCM’s SAM-R is Mil-Spec from barrel to stock. The 410 stainless barrel is treated with IonBond Black DLC to cut the shine, the lower is ready for RDIAS installation of an NFA-registered auto sear, and the railed forend has lots of real estate for accessories. 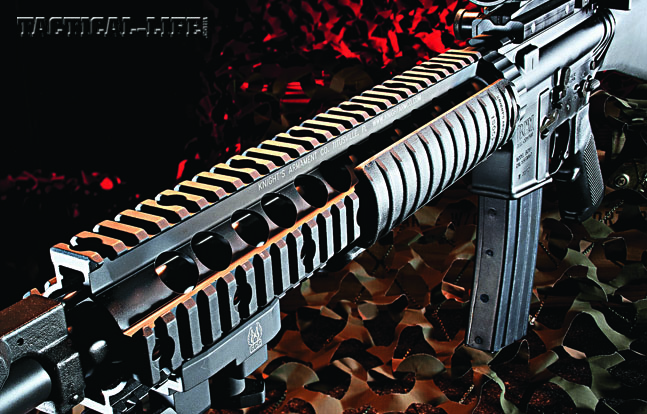 4 of 5
Bravo Company USA’s World of Warriors 3
BCM’s SAM-R is Mil-Spec from barrel to stock. The 410 stainless barrel is treated with IonBond Black DLC to cut the shine, the lower is ready for RDIAS installation of an NFA-registered auto sear, and the railed forend has lots of real estate for accessories. 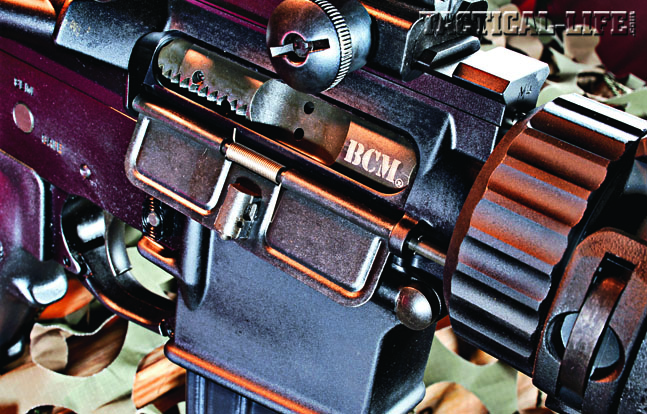 5 of 5
Bravo Company USA’s World of Warriors 4
Bravo Company’s attention to detail is hard to beat. Made by warfighters, their guns, like the SAM-R, are battle-proven and reliable. 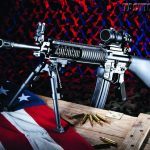 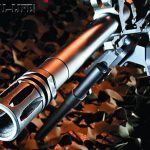 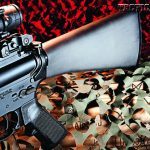 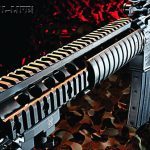 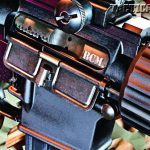 You know the story. We’ve heard it before. An entrepreneur has an idea, finds a niche and fills a need. This insightful individual begins work in a garage until that business grows into the spare bedroom. Finally, the company is forced to expand into new facilities. The thread of putting Americans to work with new jobs is woven into the tapestry of this business growth story. The American Dream has an address—Bravo Company USA—a company that, despite a dreary economy, is on track to grow by more than 30 percent before Christmas 2011. Located in aptly-named Hartland, a small-town hamlet between Milwaukee and Madison, Wisconsin, Bravo builds excellent weapons. To share this story of the American Dream, we visited the company’s founder, Paul Buffoni.

Corps Origins
“The name ‘Bravo Company’ actually came from my first company in the Marine Corps, MCRD San Diego, 1st RTBn, Bravo Company,” Buffoni said. “My time in the United States Marine Corp was one of the most formative events I have experienced. It permanently shaped me. It seemed kind of fitting to carry the name in my professional life’s work.”

Recapping the company’s history, “In many ways, Bravo Company started the early 1990s,” Buffoni continued. “I was working full-time and going to school at night, and thought I could also acquire an FFL to supplement my income. I worked some gun shows and developed law enforcement contacts as many of my friends became LE officers and moved up in the ranks.”

In 2003, still working Bravo Company part-time from his home, Buffoni asked a friend to see what it would take to build an e-commerce website. “He helped me get started and acquire the domain name ‘BravoCompanyUSA.com,’ and I officially incorporated Bravo Company USA, Inc. I had some money saved, took an additional home equity loan, sold off almost everything of value that I owned, including several firearms, and left a well-paying, full-time job to pursue Bravo Company full-time. I did not take a paycheck from Bravo for three years, and poured every dime back into its operation. I have worked about 70 hours a week ever since. I obviously have the most patient and understanding wife. And, fortunately, she came to work with me soon after I started.”

Buffoni saw an opening in the AR-15 parts market. “By 2005, we knew a lot of private security firms were operating in the Middle East. In the commercial market, civilians don’t put weapons through the torture that military or professional operators do, but we wanted to build and sell parts and weapons with the greatest endurance. We wanted to fill that niche in the marketplace. We decided to build guns as if we were going to deploy with them—as if our lives depended on them.”

Strong Builds
To fund growth, Buffoni brought in another equity owner to form Bravo Company MFG, Inc., also known as BCM. “My new partner also had the resources of a full shop to host the new BCM operation, so overhead started very low,” Buffoni said. “Our goal was to offer products that were actually built to Mil-Spec, one of the most over-used and misunderstood phrases in the entire marketplace. We had the knowledge, the ability, and the desire. We knew the correct specifications and procedures, so we formed an entire mission statement around providing the correct product with none of the shortcuts often used in the commercial market.

“First and foremost, we wanted to build products that we would be comfortable using in harm’s way. I never thought I would sell a lot. We did know, from dealing with the PSD [personal self-defense] market, that there was a small niche. The great thing is we had the freedom to do it right. Overhead was free, minimal payroll obligations needed to be met, so we had the luxury of setting up the standards and specifications without compromising. If we had to wait for the correct barrel steel, gas key or barrel extensions, we could afford to shut down the line and do so, and we did. And, we still do. The retail part of our business, Bravo Company USA, was very sizeable and could cover all the cash flow. It is still structured that way today. It will always be structured that way.”

Beginning in 2006, Bravo Company started machining bolt carrier groups. Next, receivers manufacturing added to the mix, and they began manufacturing their own complete guns last year. As of today, Bravo Company employs more than 14 people and enjoys annual sales well into eight figures. Buffoni recently moved into a 30,000-square-foot building, about a half-mile away in the same industrial park where they were previously located.

Real Mil-Spec
Putting Bravo Company USA’s parts and BCM weapons under the microscope, subtle differences will be found. “Mil-Spec will endure,” Buffoni said. “A Mil-Spec weapon may be carried 24/7, and they’re going to see higher round counts and excessive heat. If you run 1,000 rounds in three hours, there’s a significant amount of heat generated within the weapon in comparison to someone who shoots 1,000 rounds in a year’s time. Any AR exposed to high round counts over short periods of time is going to wear quickly. If the build isn’t completely Mil-Spec, it’s going to wear out really fast.”

Several examples exist of commercially-manufactured bolt carrier groups made from 4140, 8620, or 9310 steel. Bravo Company uses a different grade of raw steel. “One example of the raw material that we use is Carpenter 158 steel in the bolt carrier group,” Buffoni said. “That is what the military requires for their bolt, and it is very expensive. It is Carburized and heat-treated to Mil-Spec. You want the bolt hard but not brittle. Our bolts follow the Mil-Spec standard. Our bolts are shot-peened, and specifications require that this process is done over a very specific time period and method. Some of the commercial gun builders are using MIM (metal injection-molded) bolts. We use stronger extractor springs, and the stronger black extractor spring buffers, instead of the blue M16 buffers, too.

“Every BCM upper receiver group and weapon goes through the same proofing quality control protocol as military weapons,” Buffoni said. “Quality control requires a proof load to be fired that has pressure 50 percent higher than a normal round. This induces excessive stress. They then take the barrel and bolt and examine it through a magnetic-particle testing process that looks for cracks and inclusions. That’s why our barrels are marked ‘HP-MP’ proof tested. By comparison, many commercial ARs are batch tested. They take perhaps 10 out of 100 built and subject them to proof loads, but we test 100 percent here.”

Curious about what makes Bravo Company tick, we asked about the key driving factors that have allowed Bravo Company to excel. “I would say primarily consistent hard work,” Buffoni added. “We are staffed with great folks who are very proud of the job they do. They come to work with the drive and motivation to put out a quality product and provide good service. They take great pride in that. Those types of people can be harder to find these days, but we have been fortunate in that respect. Because of the quality of staff we have, we put in extra-long days when needed to ensure customers get their product shipped out as quickly as we can. As a shooter, when I order something, I want it now. So do Bravo Company’s customers, so we work to get it out the door ASAP.

“We also have a lot of talent here. When we add staff for an armorer’s position, we look for hardworking folks who have an extensive mechanical background. We actually do not want them to come here with previously learned bad armorer habits. We will teach them the right way to build the product. Our armorers have previously worked as airline mechanics, Harley racing mechanics, stock car mechanics, machinists and skilled tradesmen of all types. They get a very good wage, health care benefits and more. We enjoy a very skilled workforce. A company cannot do great things without surrounding themselves with great people. And we are very fortunate to have them.”

Moving Forward The BRAVO Way!
Looking ahead, Bravo Company is positioned to grow exponentially. New products are coming in a steady stream. “Our new building brings new capacity,” Buffoni concluded. “We will be introducing additional rifle models, more specialty models, along with a significant expansion into other BCM products and accessories for the firearms industry. We have several designs on the drawing board, lots of prototyping, and proof-of-concept testing ahead of us.”

Bravo Company USA products and BCM rifles have been well received. The number of uncompensated endorsements speaks volumes for the way they build their products. Whether you know what its like to be in harm’s way, or if you just want a rugged AR-15 that will last several lifetimes, Bravo might be the last place you shop. 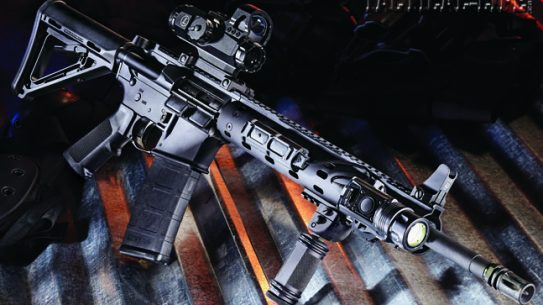 Mil-Spec+ masterpieces from a cutting-edge manufacturer!