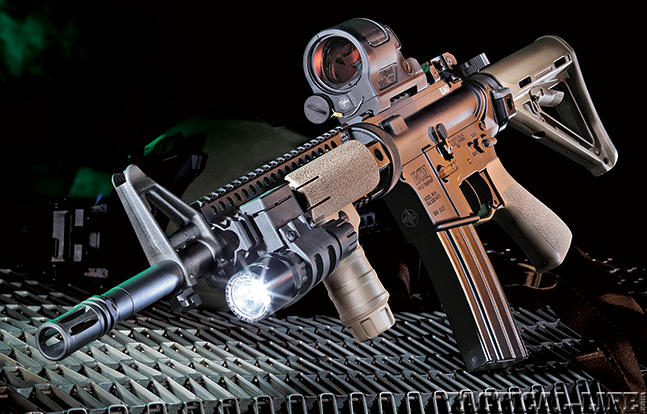 1 of 3
Bravo Company’s AR Trio: The RECCE, EAG and Jack
Bravo Company is known for building some of the most reliable carbines around. That’s why EAG Tactical and Haley Strategic partnered with BCM to create the unstoppable EAG Tactical carbine. 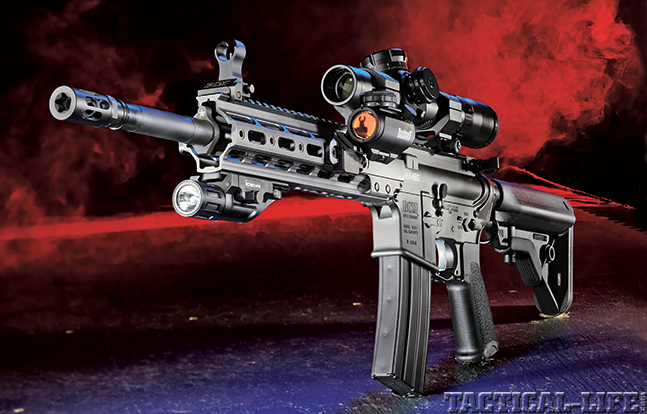 2 of 3
Bravo Company’s AR Trio: The RECCE, EAG and Jack
Bravo Company is known for building some of the most reliable carbines around. That’s why EAG Tactical and Haley Strategic partnered with BCM to create the unstoppable HSP Jack carbine. 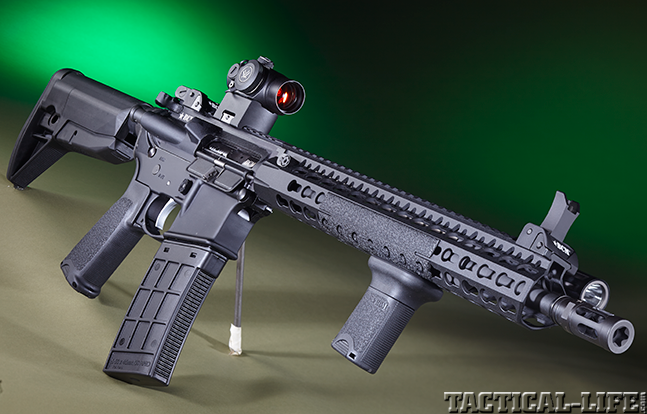 3 of 3
Bravo Company’s AR Trio: The RECCE, EAG and Jack
The RECCE is BCM’s version of the Navy SEAL carbine. 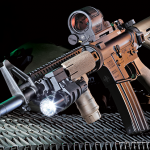 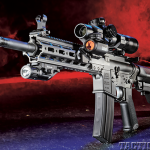 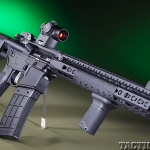 Bravo Company Manufacturing (BCM) has been providing AR parts and accessories to most U.S. military forces—SOCOM, the Army, Marines and Navy—as well as U.S. LE agencies like the U.S. Border Patrol and the Department of Homeland Security. Bravo Company’s customers also include private security companies and contractors. In 2005, BCM was formed to meet the needs of private security companies.

Contractors needed a commercial alternative to the U.S. military’s M4 Carbine, and BCM quickly filled that need with rifles that meet or exceed military specifications. The team at BCM is dedicated to building the best rifles that perform in any situation and any environment. The company has the end-user’s needs in mind every time it assembles a gun.

Of BCM’s many complete rifles and carbines, the RECCE series, the EAG Tactical Carbine and the HSP Jack Carbine truly stand out from the rest.

BCM’s RECCE rifles are based on the rifles built by U.S. Navy SEAL team armorers at the Naval Surface Warfare Center, Crane. Also known as the “SEAL Recon Rifle,” the RECCE was developed to provide SEAL snipers with a portable, lightweight system with greater accuracy than a standard-issue M4. Adhering to military specifications, BCM builds its RECCE rifles with either 14.5- or 16-inch barrels with government profiles and mil-spec chambers. The barrels, made from mil-spec steel, have 1-in-7-inch twist rates, which offers good accuracy with a wide variety of bullet weights. The barrels and bolts are also subjected to high-pressure (HP) and magnetic-particle (MP) testing per military specifications. The chambers and bores are chrome lined, while the outside of the barrel receives a manganese-phosphate finish. M4 feed ramp barrel extensions are also used. BCM’s RECCE series rifles use mid-length gas systems to ensure they perform reliably.

“The team at BCM is dedicated to building the best rifles that perform in any situation and any environment.”

The bolts are made of mil-spec Carpenter 158 steel, which is very expensive, and they’re heat-treated per mil-spec so they can withstand high round counts in short periods and not wear out like bolt carrier groups made from less expensive steel.

Both 14.5- and 16-inch-barreled RECCEs feature upper and lower receivers machined from 7075-T6 aluminum forgings. The receivers then get a MIL-A-8625F, Type III hardcoat anodizing. The uppers are A3-style flattop models, which means they come ready for mounting optics. No sights come with Bravo Company’s RECCE rifles.

RECCE lowers feature beefed-up, 7075-T6 aluminum buffer tubes with six length-of-pull positions, as opposed to a mil-spec M4’s five. The locking nut, which secures the extension tube to the lower receiver, is also staked per mil-spec.

Some of the features differ between BCM’s RECCE-14 and RECCE-16. For the former, a BCM Gunfighter compensator is permanently welded to the muzzle so the weapon’s overall barrel length is a BATFE-compliant 16 inches. The carbine is also equipped with a 12-inch Centurion C4 handguard. The RECCE-16 uses a BCM Gunfighter Mod 0 compensator and a 13-inch BCM KMR handguard. Both models use ALG Defense ACT triggers and B5 Systems buttstocks.

The newest models in this series include the BCM RECCE-14 KMR, standard and ELW (Enhanced Lightweight), as well as the BCM RECCE-16 KMR in both standard and ELW variants. The ELW barrel, according to Paul Buffoni, the president of BCM, features the company’s proprietary barrel profile, with a continuous taper. The newest RECCE rifles will include BCM Gunfighter compensators, charging handles, pistol grips and buttstocks. The stock is a new release from BCM, Buffoni explained, that will be available fall 2014. These rifles will also have free-floating BCM KMR handguards and ALG Defense ACT triggers. The ELW rifles weigh in around 5.5 pounds unloaded.

As its name implies, the BCM EAG Tactical Carbine is a collaboration between EAG Tactical and BCM. Pat Rogers is a retired USMC chief warrant officer and NYPD sergeant, and he has an extensive counterterrorism background. Rogers started EAG Tactical to provide training to the military, law enforcement and civilians. Rogers had heard about BCM’s commitment to high-quality parts and real mil-spec builds. Buffoni sent Rogers a few rifles to test, and the relationship flourished. Rogers put those initial carbines through their paces and was impressed with their reliability and soft-recoiling mid-length gas systems.

The EAG Tactical Carbine uses a 14.5-inch barrel with a permanently attached BCM Gunfighter Mod 1 flash suppressor. The barrel, made from mil-spec 1159E steel, has a government profile. It’s bore is chromed, while the outside wears a manganese-phosphate finish. The barrel extension features M4 feed ramps, and an A2-style front sight is installed.

The carbine utilizes the same upper, lower and bolt carrier group as the RECCE rifles. Its furniture is unique, however. A BCM Gunfighter Mod 3 charging handle comes standard. Surrounding the barrel is a free-floating, 9-inch LaRue Tactical handguard. The carbine comes with a vertical foregrip, a pistol grip and rail covers from TangoDown. It is also outfitted with a Magpul MOE stock, a Vltor USGI QD front sling swivel and a Troy Industries/BCM folding rear sight. A VTAC padded sling and light round out the accessories.

The HSP Jack Carbine is a joint effort between BCM and Haley Strategic Partners (HSP). This carbine was designed to work hard and do whatever the operator requires of it. The Jack utilizes a 14.5-inch barrel with a mid-length gas system. Its components are proven parts sourced from a number of different companies. A Geissele SMR Mk1 free-floating handguard surrounds the barrel, and Troy/BCM folding sights come equipped. While the Jack’s BCM Gunfighter furniture includes its pistol grip and charging handle, it uses a B5 Systems SOPMOD Bravo buttstock and an ALG Defense ACT trigger. The carbine also comes with an Impact Weapon Components Thorntail mount and an Inforce WML-HSP tactical light. After the “Disruptive Grey” Cerakote is applied to the upper and lower receivers, the HSP logo is laser-etched onto the mag well and along the upper.

If you purchase the Jack or the EAG Tactical Carbine, you also get a certificate for training at those facilities. 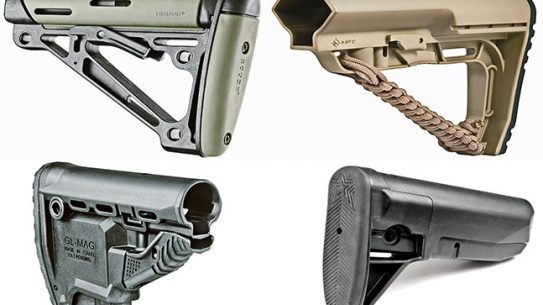