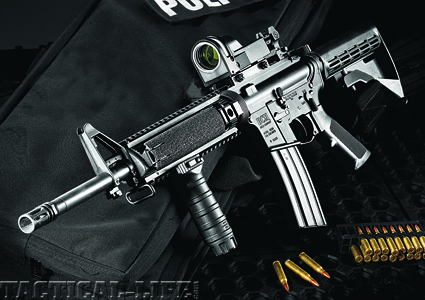 I’ve said it before but it bears repeating. Folks, we are living in the heyday of the black rifle. At no other time in the history of this nation have law enforcement officers and civilians alike had the choices that we now enjoy as far as rifles are concerned. The market for the basic Stoner design has erupted, thanks in part to a number of factors; the Global War on Terror, 3 Gun shooting competitions, and a nation hungry for AR’s after the ill-named ‘Crime Bill’ expired.

Work associates and acquaintances ask me all the time to recommend a good black rifle. While it may seem like a political answer, my response is most often that “There are so many out there (AR’s) it’s hard to go wrong.”

Bravo Company U.S.A. (BCM) is a literally one-stop shopping center for all things AR. BCM catalogs thousands of pieces and parts for the modern black rifle, stocking items from brand name manufacturers. They also offer their own designs under the “BCM” banner. 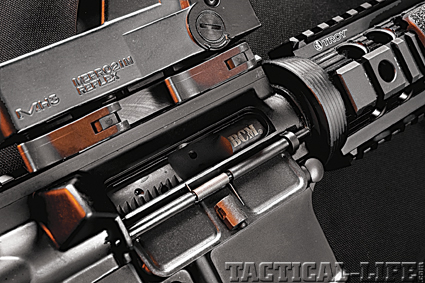 The bore and chamber are chrome-lined, while the bolt is high-pressure tested/proofed and magnetic particle inspected.

In addition to parts and components Bravo Company also offers complete rifles and carbines. Featured here is their Mid-16 Mod 2 carbine chambered for 5.56x45mm NATO. As the name indicates, the gun employs a 16” barrel and a mid-length forend/gas system. The advantages of this are numerous—namely cooler running and lower chamber pressures as the action opens. Rifling is 1-in-7 inches with a chrome-lined bore and chamber. On the business end you’ll find a NATO spec muzzle brake.

Surrounding the barrel is a Troy Industries anodized aluminum four-way rail system. Up front is a standard “A” frame front sight housing with quarter-click elevation adjustments. Affixed to the flattop rail is a Troy flip-up/fold-down adjustable rear sight with dual apertures.

The 6-position retractable stock and pistol grip are standard M4 design. Ahead of the grip is a Magpul MOE enhanced triggerguard. The upper and lower receiver bodies are 7075-T6 forged aluminum components. The trigger is standard AR but had a crisp feel, with no slop or play in the trigger press. 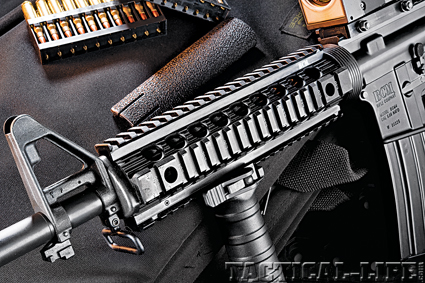 My range testing would be spread out over a few different sessions. To truly evaluate the rifle I wanted to test out a number of genuine 5.56x45mm loads with various bullet weights and designs. These would include imported 5.56mm from ATI (American Tactical Imports) and “Hot Shot” brass-cased ammunition from Century Arms International. American-made ammunition included loads from Hornady and Summit Ammunition.

I ran each load over my Shooting Chrony F1 and was impressed by the numbers I received. My range is not more than 30 feet above sea level and the humidity that day was better than 50 percent. Despite these items working against us, the recorded speeds were remarkable from a 16-inch barrel. Of course, the 1-in-7-inch twist didn’t hurt either. The “Hot Shot” SS109 ammunition averaged 3,069 feet per second (fps).

Resting the rifle on my range pack I took a moment to dial in the sights using the Summit 77-grain Match load. Six rounds later I had the front and rear sights zeroed. Every load produced a group below 3 inches and the Summit Match load was 1.5 inches.

Satisfied that the rifle was zeroed properly, it was time to move on to more dynamic shooting drills. The rifle arrived with a single GI spec 30-round magazine, so I threw several new Tapco Gen II AR magazines into my range bag.

All four 5.56mm loads were deliberately mixed together in the magazines to test reliability. Basic drills included standing to kneeling to prone and back up again. Forward, lateral and rearward movement and firing from around barricades added realism to the training sessions. 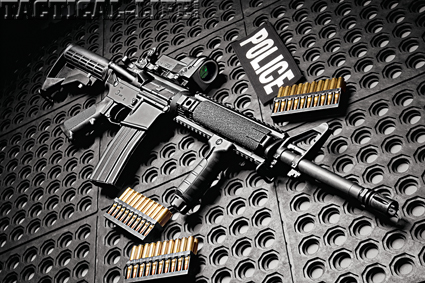 During shoot-and-move drills, I ran three full magazines through the rifle in a less than one minute. The lubricating oil on the gun turned to gray smoke and the barrel was too hot to touch — but the rifle performed without flaw.

In order to be a serious personal defense or law enforcement carbine there was really only one thing missing — a white light. The arrival of the BCM Mid-16 coincided with the brand new CombatLight from SureFire.

The new Z2-S light is a 160-lumen single output white LED flashlight. The “S” in the model number indicates SureFire’s newest feature — strobe. Yes, this light can be used in the momentary, constant, or strobe mode. Like many other SureFire CombatLights, the tailcap button is depressed for momentary use. If constant “on” is desired, you twist the cap down.

To use the strobe option on the Z2-S the user needs to tap the tailcap switch rapidly three times. On the third tap the strobe will begin and remain on as long as the tailcap button is depressed. Affixing the SureFire to the 4-way rail was accomplished with the use a Safariland RLS mounting bracket.

To aid me in both controlling the carbine and to give me an anchor point to activate the CombatLight, I added a TangoDown “BattleGrip.” This vertical foregrip is a solid, well-built piece of gear. The original TangoDown BattleGrips mounted very securely, so securely in fact that removing them was extremely difficult at best.

While they may be known as an AR parts supermarket, BCM apparently employs some very competent gunsmiths. The Mid-16 Carbine was assembled with attention to detail using high quality components throughout.

As for accuracy and reliability, I have no complaints. Every load cycled through the gun without flaw and the 16-inch barrel offered exceptional accuracy from a carbine. With all the ARs available to an LE officer, the decision as to which to buy is not an easy one. BCM hasn’t made this any simpler. 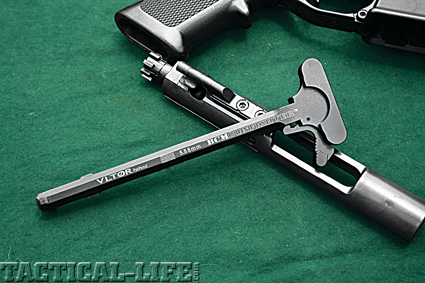 One of the greatest selling features of the AR is its simplicity of design and the fact that it so versatile. It can be used as a defensive weapon, a hunting rifle, and competition gun. Black rifles can be easily modified for the situation or mission. One of my industry friends refers to the modern AR as the “Mr. Potato Head” for adults.

One-Stop Shopping
The popularity of Mr. Stoner’s design has grown and spawned a thousand aftermarket pieces and parts over the last several years. One of the companies to fill the need for parts is Bravo Company USA or BCM for short.

Bravo Company stocks literally thousands of components and parts for the modern black rifle. The list includes all manner of stocks, grips, and forearms, sights and optic mounts. They offer barrels, upper and lower receivers both stripped and completed. Naturally the BCM catalog includes all the small pieces/parts that you need to make the AR run.

The Hartland, Wisconsin company stocks parts from numerous big name manufacturers such as LaRue, Yankee Hill, Daniel Defense, MagPul, Vltor, Badger, Midwest Industries and more. They also have their own line of parts marketed under the BCM logo.

One of the most popular BCM products is their Gunfighter charging handle with small, medium, and large latches. These aren’t for the Sunday afternoon shooter. The operator that truly runs his M4 hard will appreciate the BCM charging handles.

Complete Packages
While they may be best known for their parts catalog, Bravo Company USA also offers completed rifles and carbines. Their custom-built rifles are offered with 20-, 16-, and 14.5-inch barrels (14.5-inch models have permanently attached muzzle-brakes). They also offer NFA or Class III carbines for Govt. / L.E. purchase.

Various stock and forearm configurations are available as well as M4 and heavy-barrel designs. Some carbines come with a removable carrying handle, while others have a flattop receiver. BCM are adding new designs all the time so check their website at bravocompanyusa.com.

Not an AR fan or owner? That’s alright, Bravo Company has products to satisfy the M1911, Glock, Smith & Wesson and even the AK owner. Check out their website for more information. 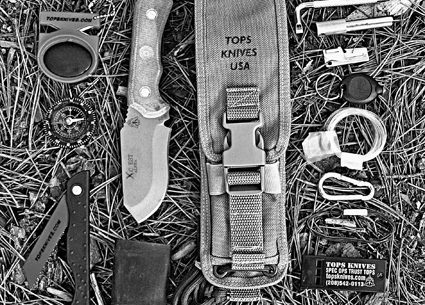