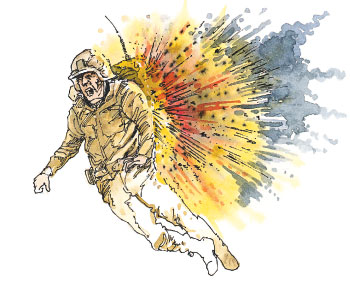 February 11, 2008: The mission was to uncover a suspected Taliban bomb-making factory in the Helmand province. Thirty-two British Marine Commandos traveled on foot under the cover of darkness, wearing body armor, helmets, their SA80s and 400 rounds each.

Lance Corporal Matthew Croucher, 24, had served in Iraq three times before deploying to Afghanistan. Two hundred yards from the compound, Croucher was sent in as part of a four-man recon team.

“We had night vision goggles on,” said Croucher. “There was one main building. We used heat-seeking thermal scopes to check for bodies in the building. Within five minutes we’d found 200-kg. of fertilizer in 50-kg. bags, which they were using for bombs. So we pressed deeper into the compound.”

As the team moved through the compound, Croucher’s foot brushed a wire. “I felt it on my shins and saw the four meter wire. The grenade was stuck to a stick with tape behind a tree 2 feet from me. It was a pineapple type like the ones you see in the old World War II films. The force of the pin coming out knocked the grenade off its stick. It fell right by my feet. I shouted, ‘Grenade, take cover!’”

A moment later, the sound of a ping indicated that a pin had been pulled from a grenade. Croucher frantically scanned the ground through his goggles when he saw it. He calculated that he had just 7 seconds to live. “I knew a grenade like this has a killing circumference of about five meters,” recalled Croucher. “I’d been through this scenario in my mind and realized there was nowhere to take cover—there’s no point running off because you’re gonna catch shrapnel. So I went down next to the grenade. I figured that if I could keep my torso and head intact, I’d probably survive any other injuries.”
Croucher rolled on his side and lay with only his backpack shielding his torso for protection.

“So I got down with my back to the grenade and used my body as a shield,” Croucher described. “I brought my legs up to my chest in the brace position and waited for the explosion. When it went off, there was a flash of light and a big plume of smoke and orange sparks jetted into the air. I was flung through the air. My head was ringing. Blood was streaming from my nose. It took 30 seconds before I realized I was definitely not dead.”

Croucher’s body armor and pack filled with radio equipment, a shoulder launched rocket and medical supplies had absorbed the brunt of the explosion. “It was blown straight off my back,” he reported. “The blast shunted me a full meter. The lithium battery for my communication equipment took the brunt of the shrapnel—it landed 10 meters away with sparks and flames flying from it.” All survived with minor injuries.

“I was checked over by a medic who wanted to evacuate me—but I wanted to stay,” says Croucher. “We knew the Taliban would want to come and see what had happened.” Croucher’s team settled into a nearby ditch and waited. “Within an hour or so our team spotted a guy with an AK-47 approaching our position. He was in his early 30s and wearing traditional Afghan dress.
“I don’t know for sure if he spotted us, but when he lifted his weapon as if to shoot in our direction we opened up. I’m more or less certain I shot him. For all I knew this guy had set the booby trap. He was my 10th or 11th kill in five months in Afghanistan.”

Lance Corporal Croucher’s action was the second act of bravery under fire in four months. His extraordinary actions have resulted in him being considered for the Victoria Cross. If he is awarded the honor, he will be just the first Royal Marine to earn it since 1945.

Croucher has kept his backpack as a trophy. “It’s a reminder of the day I beat the grim reaper,” he said. 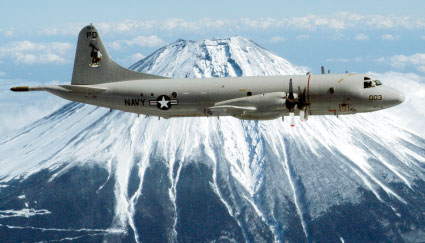 February 11, 2008: The mission was to uncover a suspected Taliban bomb-making factory in…