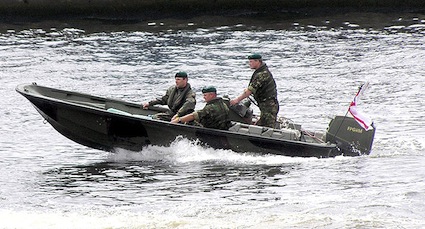 British MPs on Thursday called on the government to clarify if weapons should be allowed to be used by merchant vessels under attacks from Somali pirates in the Indian Ocean.

British Prime minister David Cameron announced in late 2011 that private armed guards are allowed on British vessels, but a report on Somali piracy published on Thursday by the Foreign Affairs Committee suggested the government should clarify whether these armed guards could shoot pirates.

The report also called for the British government to secure “the widest possible international participation in counter-piracy operations in the Indian Ocean and the Gulf of Aden.”

“It is unacceptable that 2.6 million square miles of the Indian Ocean has become a no-go area for small vessels, and a dangerous one for commercial shipping. There is a clear need to take decisive action,” said MP Richard Ottaway who is also chair of the Committee.

Image: Finlay McWalter for Wikipedia British MPs on Thursday called on the government to…