0
SHARES
15
VIEWS
Share on FacebookShare on Twitter
Trauma gear, such as a first aid kit, bandages and medical supplies, is also a must for an LEO’s action-ready kit.

The terms “go bag” and “bug-out bag” have become rather vogue in the personal defense and survival community. “Bug-out bag” just sounds cool. Despite the recent popularity of the idea, the fact of the matter is that go bags or load-out bags, if you will, have been in use by the U.S. Military’s Special Operations community for decades.

A go bag is simply a container that you’ll use to pre-stage and organize vital equipment. Obviously, a go bag is set up and stored in the event that the user will have to deploy for a mission on a moment’s notice. Special Operations personnel must be ready to go at any time of the day or night.

What about law enforcement? Do they have the need for a go bag? I think we can easily agree that modern LE professionals do indeed have the need for the go bag. As rapid responders, LEOs rarely have the time to pack a tactical bag after the call has been received. They must be ready to deploy instantly. 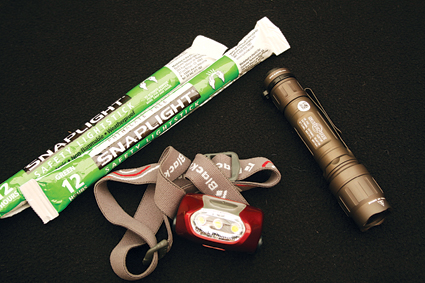 Illumination tools, such as headlamps, high performance flashlights and disposable “chemlights” are a must for any LE go bag.

Go Bags
When discussing the go bag for LE, we have two basic categories: short-term and extended deployment. The short-term bag is an individual-sized container that an officer can grab and go with for a single engagement. For instance, the short-term bag could be staged with the patrol rifle. This bag would contain a spare magazine or two, first aid/trauma gear, a bottle of water, a set or two of flex-cuffs, a flashlight perhaps.

The short-term go bag is expected to provide the individual officer with gear for a relatively short engagement. This might be an active shooter call that ends in minutes or a barricaded suspect scenario that takes hours.

On the other end of the scale, we have an extended deployment bag. This particular bag will be set up to supply several officers, say a four- to six-man team, with essential gear for long-term problems. Natural or manmade disasters rarely can be wrapped up and secured quickly. The aftermath of Hurricane Katrina is an excellent example, though there are many others.

After a disaster occurs, law enforcement officers are expected to remain vigilant and on-duty for days at a time. I have several good friends that were LE officers on the gulf coast after Katrina struck. On average, they were getting four to five hours of sleep a day and they worked non-stop for the first two to three weeks before enough support arrived to give them some rest. The job is tough enough. You don’t want to make it tougher by not having the essential gear you need to accomplish the mission. 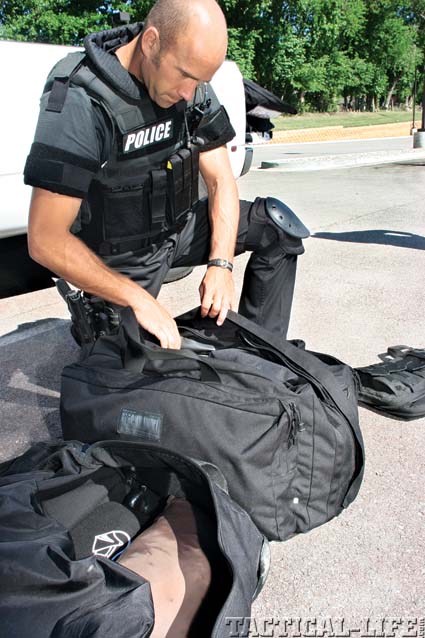 A grab-and-go bag for the individual should have a few practical attributes. Naturally, the bag itself needs to be tough and have multiple pockets. A large, single strap of some sort so it can be quickly slung over the shoulder works the best.

As for contents, we already discussed many. Spare magazines filled with ammunition for your long gun (patrol rifle) and handgun would naturally be a wise choice. These of course are not just for you, but for your partners who may be low on ammunition. Remember your gunfight rules: bring friends with guns.

Trauma gear is a must as well. At minimum, you should have a tourniquet and the knowledge of how to use it. If you are responding to an active shooter call, two tourniquets would be a wise choice. Next on the list would be pressure dressing material, an NPA (nasopharyngeal airway) and decompression needle. Again, you need to get training with this gear ahead of time.

You might want to add an additional flashlight or disposable “chemlights.” A knife or multi-tool might also make your life easier. In the end, it’s your kit so it’s your choice.

An extended deployment or load-out bag will be larger. This container will hold gear for not just one man but an entire team. For this bag, we must think days, not hours. During a disaster, resupply is not something that you can count on immediately. You must assume that you won’t be getting resupplied for several days. Seventy-two hours seems to be the agreed upon standard and I’d rather be on the safe side. Unless you fall into a river, there is no such thing as too much ammunition.

Start with the understanding that you will be supplying a small team or squad with mission critical gear. Ammunition and extra magazines for primary and secondary weapons should be considered. In the immediate aftermath of Hurricane Katrina, both the New Orleans PD and local parish deputies were literally battling for supremacy of the streets. Many of the officers had only the weapons and ammunition on their duty belts. When reinforcements arrived, they found many officers were down to a few rounds in their pistols.

During the LA Riots in 1992, teams of patrolmen were engaging rioters and organized gang members for days. The round count was considerable. Remember, during a crisis you can’t call time-out and send the new guy to the store to pick up a few boxes of ammunition.
Additional trauma and medical gear are also good choices, including comfort items like adhesive bandages and aspirin. This includes hand sanitizer or handy wipes. When the excrement hits the wind machine, don’t expect a shower for several days.

Long term, emergency food is never a bad idea. Military MREs or “Mountain House” camping food will stay good for years of storage. MREs are scientifically designed to give troops the nutrition they need to function in tough environments. These are a better choice than granola bars or packages of crackers.

Drinking water is another big question. Water is heavy and takes up space, but you can’t live without it. People that have never lived through an environmental disaster or served in the combat arm of the military have a hard time comprehending what it would be like to not have fresh drinking water.

In the aftermath of a disaster, you will likely be resupplied with water from bulk containers. You will need something to store/carry that water in. Empty water reservoirs or canteens take up little space and weigh an ounce or two. All of the major manufacturers are making water reservoirs out of anti-microbial plastic now to keep them from getting nasty.

Other items such as military-style ponchos and poncho liners can be worth their weight in gold when it’s cold and wet. Emergency “space” blankets take up very little room but can be lifesavers. You don’t have to live in the “Great White North” to experience hypothermia.

Naturally, you are not simply going to throw all this gear into your extended deployment bag loosely. Smaller bags and containers will be used to segregate and organize gear. The one-gallon Ziplock bags are great for making up medical kits or comfort item kits.

Most of the purpose-designed load-out bags will have plenty of carrying straps and the good ones have handles and wheels so one man can move them around. The BlackHawk “A.L.E.R.T. 5” bag is such a container. It has internal pockets, a huge central storage area, handles, straps and wheels. There are even two clear windows on top and one on the end of the bag for inventory lists and placards to indicate just what is inside. The designers wisely lined the container with a light colored, tan material so you can actually see inside the bag.

Chance favors the prepared. When examining the go bag or load-out bag, you should be thinking of when you need this not if you will. Without a doubt, there is certain mission-specific gear that only you and your agency can determine. Take the time while you have the time to load and store your bags.

Running around looking for gear or having to fight without the proper gear is not the way professionals operate. It is never a bad idea to hope for the best while preparing for the worst.