Though as of right now, that’s as close as most have come to shooting an ACR. The ACR may be the most anticipated weapon system ever. Incorporation of the ACR into the most popular shooter, Modern Warfare 2, no doubt increased ACR awareness. However, armed professionals such as LE officers and tactical team members are the intended  consumer of this impressive rifle.

Firearms and video games have come a long way. A musket bears little resemblance to an ACR and Modern Warfare 2 is a long ways from Pac-Man. It’s super cool to play with realistic firearms in realistic video games but the real modern warfare connection of the ACR is that it was designed to put the best rifle possible into the hands  of armed professionals. Forget the game. The ACR is now real. It’s no longer just a digitized weapon of choice for teens and adults lounging in front of their big screen with a controller in one hand and a bag of Cheetos in the other. 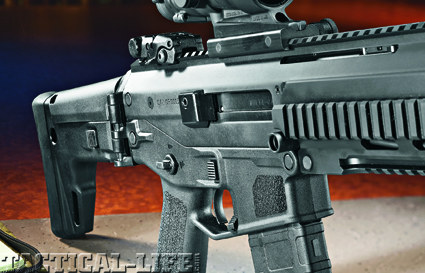 Conceptualized by Magpul Industries as the Masada Adaptive Combat Rifle (ACR), the intent was to build a more reliable and accurate American-made rifle, on a mission-configurable platform, specific to the challenges of the modern tactical world. The project ultimately became a joint venture between Magpul, Bushmaster and Remington Arms. They all shared a common vision with Bushmaster addressing law enforcement and civilian needs, while Remington the military.

The ACR is a shoulder-fired, magazine fed, semi-automatic, air-cooled, tactical carbine that functions via a regulated, short-stroke gas piston operating system. Combining caliber interchangeability with swappable barrels, stocks, and accessories allows the ACR to go from a close-quarters carbine to a designated marksman rifle. Most importantly, this versatility is configurable at the user level. The ACR shares features with the AR and looks similar to an FNH USA SCAR, but the adaptability sets the ACR apart from just about everything else.

The lower receiver is not serialized. It’s manufactured from what Bushmaster calls a “High Impact Composite.” New-age geeks call it polymer, hillbillies call it plastic. The lower is held to the upper by two captive pins. The lower contains the trigger assembly which is an AR trigger housed in a metal trough. The magazine release is ambidextrous and located similarly to one on an AR. The bolt release/lock is ambidextrous too. It’s positioned at the bottom of the receiver between the magazine well and triggerguard. Push down to release, up to lock. The bolt catch or stop is located in the center of the receiver at the rear of the magazine well, where it can engage the top of the magazine follower after the last round has fired.

The right and left panels of the pistol grip and forward portion of the magazine well are textured. The pistol grip is hollow and contains a removable compartment that will hold two CR123 lithium batteries. The fire control switch or safety lever is AR-like in function and location but it is also ambidextrous.