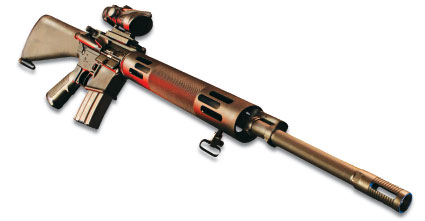 Roughly a year-and-a-half ago, Bushmaster’s Jon Clark enticed me with news of a new weapon and cartridge soon to be released. The new gun, the .45 Bushmaster, would naturally chamber the obvious corresponding cartridge.

The project was a collaboration between Bushmaster and Hornady, and was slated to be ready by mid-summer 2006. My interest piqued, I waited anxiously for the weapon to be shipped to me.
Every so often, a new cartridge hits the market, usually prom-ising better performance in one area or another. Some of these go on to become mainstays of shooters, such as the .40, while others fade into obscurity like the .41 AE. When the new ammunition is announced, the first question asked by many shooters is “Why? What niche will it fill? Why do we need yet another caliber?”