I didn’t think I was going to care much for the Bushmaster ACR when I first received it for testing. That’s probably because the publicity surrounding the introduction of the prototype would have one believe it was the best small arm ever invented. And then there was a long delay before production began, followed by a price that turned out to be a great deal more than expected. However, after using the gun for a while, I changed my mind.

Introduced in January of 2007 by the designers at Magpul Industries, the prototype Masada Adaptive Combat Weapon System was billed as featuring “a gas-piston operating system, tool-less quick-change barrel system, multi-adjustable folding stock, and integrated storage.” It was supposed to make it quick and easy for the military and law enforcement to transition from the AR-15/M16 system to a modern design because of the similar placement of controls, even though the gun was much different internally. 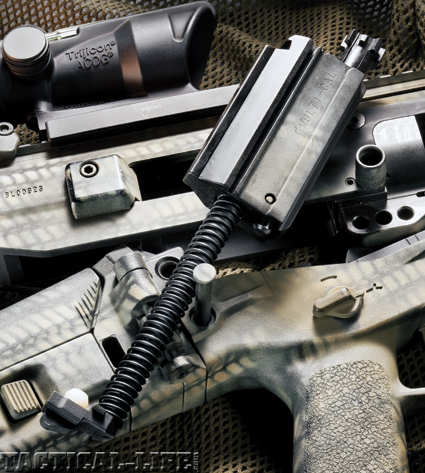 The bolt carrier group can be quickly broken down into its component parts for cleaning, and the Melonite surface treatment improves wear resistance.

Magpul Industries, while it makes some fine products, is not a firearms manufacturer, so the company sought out and found a partner to finalize and produce the Masada. The production gun is the Adaptive Combat Rifle made by Bushmaster Firearms, and it’s well suited for military and law enforcement use. In fact, some agencies are already using it.

The barrel and gas piston assembly can be removed from the upper as a unit, easily disassembled for cleaning. The piston system keeps the upper receiver and bolt carrier group cooler and cleaner.

Gun Details
Bushmaster makes the semi-auto version of the short-stroke gas piston- operated, rotating-bolt, magazine-fed, centerfire carbine, while Remington manufactures a select-fire version that is available to the military and police. Both are available in either 5.56mm NATO (use is not restricted to .223) or 6.8mm SPC. The major components of the system are the upper receiver, the operating group (which some would call the bolt carrier group), the lower receiver, the barrel and gas piston assembly, the handguard and buttstock assembly.
The gas system consists of a gas block that is pinned to the barrel twice, a gas regulator that is retained within the gas block by a spring-loaded crosspin and interlocking lugs, and of course, the piston. The regulator has two settings—one marked with a “U” for unsuppressed fire and the other with an “S” for use with a sound suppressor.

To facilitate quick barrel changes and to make cleaning the gun easier, the 16.5-inch free-floated, magnetic particle-inspected barrel can be removed and replaced without the use of tools by rotating an interrupted thread collar that secures it to the trunnion. The company claims no loss of zero when the barrel is removed and replaced. The twist rate is 1-in-9 inches, but 1-in-7-inch twist rate barrels are available, as well as barrels in lengths of 10.5, 14.5 and 18 inches, making the gun quickly adaptable to about any mission. A very effective AAC Blackout flash suppressor is threaded to the front of the barrel.

The semi-auto-only test unit made by Bushmaster came equipped with Magpul folding MBUS backup iron sights that attach to the continuous upper Picatinny rail. The front post sight is adjustable for elevation, while the rear, with its 0 to 100-yard and 100 to 300-yard apertures, is adjustable for windage. Interestingly, the manual has directions for setting the battle sight zero at 25 meters, which is the U. S. Army’s standard battle sight zero. 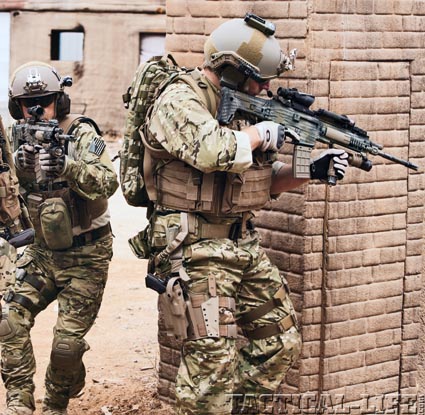 Designed for minimal maintenance and ease of operation, the ACR experienced no malfunctions and handled well in tactical drills.

Although the Basic ACR comes with a smooth, vented polymer forend, the Enhanced version received for testing has an extruded aluminum forend with rails at 3, 6 and 9 o’clock positions as well, making it very easy to attach accessories. Its hardcoat anodized finish matches that of the upper receiver and it can be quickly removed by pushing a captive retention pin to the right and sliding the unit forward. In contrast to an AR-15, the ACR’s upper receiver bears the serial number.

The pistol grip and triggerguard are integral to the lower receiver, along with the generously beveled magazine well. The grip and magazine well are also textured with a very effective slip-reducing pattern made of tiny Magpul logos. Built into the integral, textured grip is a removable unit that can store two CR123 batteries in a dry compartment; however, it does rattle a bit.

The heat-treated, steel alloy barrel trunnion is bolted and pinned to the upper receiver and receiver rails, making a solid platform to which the barrel is attached. This rigidity helps the gun maintain zero even though the barrel can be removed and replaced. The trunnion also serves as the rear mounting point for the lower handguard.

Reciprocating inside the upper receiver is the steel bolt carrier. Grooves milled into both sides engage the steel rails inside the receiver, and Bushmaster says that the steel bearing surfaces improve wear resistance and dimensional accuracy when compared to the aluminum bearing surfaces of an AR-15. The bolt head, lugs, extractor and ejector are very similar to those of an AR-15, and while the firing pin that resides within the bolt looks a lot like that of an AR-15, it is spring-loaded to decrease the possibility of a slam fire or the gun discharging if dropped. Attached directly to the bolt carrier is the action spring assembly, which consists of the recoil spring and a guide with a white polymer buffer that the bolt carrier strikes against at the end of its travel. The assembly can be removed from the bolt carrier group as one unit. 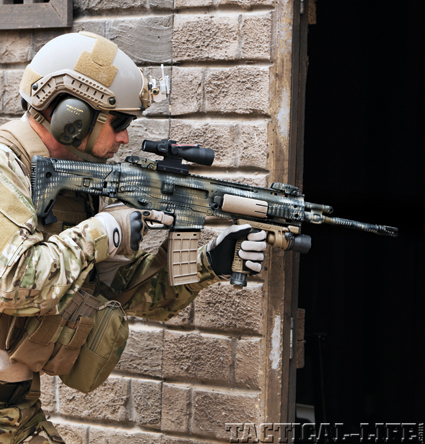 Built as an easy-to-adopt replacement for law enforcement and military AR-15/M16s, the Bushmaster ACR is easily maneuverable and well suited for close-quarter engagements.

Ambi Controls
The charging handle can be located on the left or right and connects to an extension that engages the bolt carrier. Although the handle does not reciprocate, it serves as a forward assist and slopes slightly downward, providing a bit of clearance for knuckles so they are less likely to be scraped by optic mounts. The ACR is supplied with one 30-round polymer Magpul PMag magazine, but the gun will accept any AR-15 or M16 magazine.

The owner’s manual says the polymer folding and telescoping buttstock has six positions (I count seven) that allow the user to adjust the length of pull. The stock folds to the right for transport and storage. While the gun can be fired with the stock in this position, it’s not meant to be fielded that way. The stock has a rubber buttpad and the comb can be raised or lowered. The entire buttstock can be removed by sliding it out of its retaining grooves after disengaging a captured retention pin. 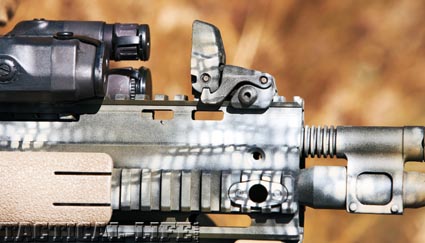 With plenty of room to mount a variety of optics along the top rail, the ACR is also supplied with Magpul polymer MBUS.

With two slots and a reversible socket, there are three sling mounting points on the buttstock. These, along with a loop on the left just behind the receiver and sockets at the mid-point and front of the handguard, allow the use of carry straps and three-, two-, or single-point tactical slings. The gun is truly adaptable.

The bolt catch, like nearly all ACR controls, is ambidextrous. It is located at the bottom front of the triggerguard and is activated either by the follower of an empty magazine or by pushing it up with the trigger finger while retracting the bolt. To release the bolt, the trigger finger merely pushes the catch down.

A polymer, ambidextrous safety lever is located in the same place as on an AR-15 and can be easily reached by either the thumb or trigger finger of the firing hand. The single-stage steel trigger had a bit of creep with very little over-travel and an average pull weight of 8.63 pounds.

The magazine release button is also ambidextrous, protected by a fence to reduce accidental activation and is located in the same place as on an AR-15. When pressed, magazines dropped freely from the receiver.

Quick Barrel Change
To remove the barrel, remove the lower forend/handguard and pull down on the barrel-locking lever, which depresses a spring-loaded plunger lock. Then rotate the lever clockwise until it stops, at which point the barrel can be pulled forward from the trunnion, with the gas piston, block and valve coming along for the ride. The gas piston can be removed by pressing the plunger on the regulator, turning the regulator a quarter-turn clockwise and then pulling forward, after which the piston and spring are removed.

According to Bushmaster, the gun may be fired without oil or grease because of a very hard Melonite surface treatment that resists wear on the bolt carrier group, carrier rails and the barrel. To test this claim, I fired 500 rounds without lubrication, cleaning or disassembly and experienced no malfunctions. Afterwards, I cleaned the bore normally with solvent, brushes and patches, but all it took to clean the operating parts was a little brushing and a light wipe with a rag. Wear appeared to be minimal. Removing the gas piston and valve was difficult, though, because of carbon buildup, and Bushmaster recommends cleaning the inside of the gas block with a bore brush and solvent, then oiling and wiping dry before assembly. Although the gun may be run dry, it certainly is not a bad idea to use some lubrication according to sources at Bushmaster.

Range Time
Accuracy testing was conducted off a sandbag rest at 100 yards with a variety of ammunition using a Schmidt & Bender 3-12×50 PMII scope in a LaRue Tactical mount. The best group measured a very acceptable 1.33 inches. Using a Trijicon RMR miniature reflex sight with a 9-MOA amber dot and a SureFire Mini Scout Light for close-quarter drills, target acquisition was lightning fast and accuracy was very good.

Recoil and muzzle flip were very mild. I attribute that to the piston system, the weight of the bolt carrier group, the recoil-dampening effects of the polymer construction and the gun’s weight, which is not excessive, despite being heavier than some ARs. The charging handle location proved to be very convenient, as was the bolt catch release, which was also very fast to operate.

Final Notes
I was ready to dismiss this gun as another attempt by a manufacturer to come up with something different but not necessarily better. However, after using it, I have a different opinion and am impressed with the operation, ergonomics and reliability of the ACR. The gun is too new for any real-world endurance results to be available, but if the new design turns out to have a long service life with a low failure rate, then this gun may be the one that operators, and everyone else, wants.