There’s a current fascination with big-bore tactical rifles, partly because the military has recognized the need for such a weapon and partly because law enforcement agencies understand the benefit of having a rifle like this in their arsenal. Bushmaster recently introduced the BA50, a bolt-action rifle chambered for the .50 BMG cartridge that is specifically intended for military application. That does not mean it is inappropriate for law enforcement agencies that may need to whack a substantially barricaded bad guy or possibly disable a vehicle from a distance, and guys that like cool guns will undoubtedly get in line for one too. 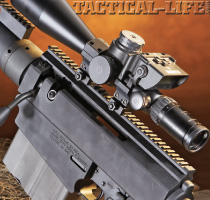 Gun Details
The BA50 comes in a hard-sided storm case filled with closed cell foam that has been perfectly cut to fit the disassembled rifle. The rifle is made up of a lower and upper receiver similar to an AR. As a matter of fact, the upper is attached to the lower just like an AR and the rifle can be assembled in about two minutes. The BA50 feeds from a 10-round magazine and the most unique feature is that the bolt is on the left side and ejection occurs on the right.

This left hand operation, right hand ejection has tactical application. If you have ever shot a bolt action rifle from the prone position it should be readily apparent. Trying to work a right handed bolt from the prone position requires you to roll left, take your hand from the fire control area and remove your eye from the sight. With the left handed operation of the BA50 you can maintain your shooting platform, your view of the target and cycle the action, never removing your hand from the grip or your finger from the trigger. This helps reduce time between follow-up shots; I was able to shoot 2-inch, three-shot, groups at 100 yards in less than 10 seconds.