by Dan Goodwin
in Guns, Rifles
0

0
SHARES
91
VIEWS
Share on FacebookShare on Twitter
Company president Skip Patel couldn’t be with us the day I joined Cobb Manufacturing’s training and sales reps on a police range near Atlanta, because he’d flown to Maine to finalize the sale of his innovative company to major-league gun maker Bushmaster. The AR giant’s acquisition of this upstart Southern gun factory, retaining Patel as R&D wonk, already spoke volumes about the new weapon system I was there to test. 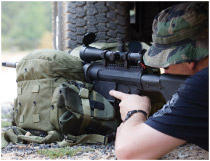 Although shooting for more than four decades thanks to a Dad who was into guns and hunting, my shooting ability is only, um, adequate. I’ve put a lot of meat in the pot, but until that 100+ degree day on the Paulding County Sheriff’s sniper range, I’d never shot a centerfire group tighter than .60-inches.

Before firing the first cheroot-sized .338 Lapua Magnum round, I dry-fired the XMCR 400 three times from the prone position with a bipod—then put the first three rounds from the autoloader into a .549 group at 100 yards. Between the premium 22-inch target barrel, the match-grade trigger pack, the industry-standard Leupold sniper scope, and some luck, I had bragging rights. Booting a 250-grain BTHP (boat-tail hollow-point) from the barrel at nearly 3,000 feet per second and throwing more than 4,000 foot-pounds of energy down range, made it feel like Jove hurling lightning bolts.

A Jovian Instrument
Earlier, at the production facility, the company’s Law Enforcement/Military Trainer and Cobb County Sheriff’s sniper team instructor Nat Nation gave me the rundown on this Jovian instrument. “The rifle we’re going to be shooting today is our prototype and shop mule,” he explained. “We’ve currently got two uppers we’re running on it.

“One is a 30-inch barrel: That’s the one we were making hits out to 1,800 yards with at Gunsite a few weeks back,” Nation said, pointing at the business end of the barrel. “The muzzle-brake on that is our own proprietary unit.

“The one we’re going to shoot today is equipped with a 22-inch barrel that has a SureFire muzzle brake that accepts their suppressor,” he said. The operational benefits of a suppressed .338 that shoots as flat as a .270 are obvious, and Nation said the company’s prospective military and law enforcement clients will want the ability to suppress.

The introduction to the first commercially available semi-automatic .338 Lapua rifle continued. “Rather than trying to cut our own premium barrels, we decided to go with a known factor,” Cobb Police Department S.W.A.T. team member and company sales rep Doug Gundlack said. “So Skip decided on Lothar-Walther barrels. They are world-renowned for their accuracy and quality.” (Author’s note: Just prior to going to press, TW has learned that all future guns in this platform and all others will be made using Bushmaster barrels.)

The 1-in-10 twist, match-grade barrels are snugged and free-floated into the oversized AR-style receiver and ride under a free-floating forearm replete with now-standard mil-spec Picatinny rails that can mount a plethora of accessories to aid in target designation, illumination and, of course, target destruction.

Features
The prototype’s lower was equipped with a Magpul Precision Rifle/Sniper stock, fully adjustable for LOP (length of pull) and drop. At its shortest LOP, it is about as long as an A1-type stock and extends about half an inch longer than an A2 stock. The stock features a machined-billet butt plate with rubber butt-pad, mil-spec phosphated steel shafts, and aluminum ball-detent knobs. Like other shooters who are always tweaking their gear, I noticed Nation and Gundlach had slipped a Sims Laboratory Limbsaver recoil pad onto the butt of the Magpul stock.

The single-stage trigger pull was light and crisp. The lower receiver, at least from the easily changed magazine well rearward (thus the Multi-Caliber Rifle designation), is just about all garden-variety AR parts. This leads to easy cross-training, and field-and depot-level repairs.

“The 5-round magazines provide the sniper the ability to rapidly engage multiple targets up to a maximum effective range of 2,000 meters.

Painless Recoil
As mentioned earlier, the Lothar-Walther barrel had a nice-looking SureFire Fast-Attach Suppressor Muzzle-Brake/Adapter on the end of it. Neither it nor a matching suppressor was catalogued at the time of this writing, but one supposes it will not be too long before the Fountain Valley, California-based company introduces a “FA858S” Fast-Attach High Endurance Sound Suppressor for the military, law enforcement, long-range tactical competitors and stealthy elk hunters (where legal).

Although there was no suppressor to test, the muzzle brake performed well, and there was no discomfort from recoil or excessive muzzle jump from the prone. As someone who formerly campaigned with a .338 Winchester bolt-action and suffered from the bench with it, I can tell you the 19-pound gas-operated and muzzle-braked .338 Lapua was more comfortable. The substantial blast and crack from a cartridge producing more than 60,000 psi chamber pressure was significant, but not unpleasant.

The new Bushmaster iteration has al­­­­ready been tested by USMC representatives and its commercial availability is imminent. Cases of receivers marked .338 Lapua were in evidence during my visit.

Case History
The cartridge is the salient feature of this arm. Work on this cartridge now known as the .338 Lapua Magnum actually began in the United States circa 1982 when the military asked Research Armament Industries of Rogers, AR., to develop a long-range rifle for sniper applications.

After some fiddling with the .300 Winchester Magnum, the decision was made to develop a cartridge that could launch a .338-caliber, 250-grain projectile at 3,000 fps.

The big Weatherby .378 case was tried first, but its shape was found unsuitable for the perceived criteria, so eyes turned toward the big BELL (Brass Extrusion Laboratories Ltd.) .416 Basic hull necked to .338.

An American bullet maker then designed and manufactured a 250-grain BTHP  bullet for the cartridge, but overall it didn’t meet the military’s stringent criteria. The Finnish firm of Lapua came into the project in the summer of 1984, but military interest waned by 1986 despite an appropriate projectile being developed, and the nascent mid-sized blaster went into a period of limbo while the American military concentrated on sniping with .50 BMG platforms.

Lapua then adopted the cartridge concept and subsequently changed the overall length and interior dimensions and the .338 Lapua Magnum officially came into being in 1989, when the Finnish company collaborated with Accuracy International of Great Britain to make rifles chambered for the round.

Conventional wisdom is that our military forces are thinking of joining the growing list of nations who issue the .338 Lapua Magnum as a good alternative round between 7.62 NATO rifles and .50 BMG systems. Indeed, there is talk of the Lapua big stick replacing the .300 Winchester, as some consider the latter’s ballistics not much better than those of the .308 Winchester for sniping purposes.

Nation, Gundlach, photographer Chris Rohling and I ran several boxes of ammo through the .338 on the 100-yard range. In one manufacturer’s loads, we experienced several pierced primers, but this did not affect functioning of the rifle.

As fellow Easterners, though, both Nation and Gundlach had been impressed when they recently got to stretch the big gun’s legs in Arizona. “Six hundred yards is about the longest shot we can set up around here,” Gundlach said. “So when we got to Gunsite we were a little nervous about trying a shot over a mile away. “But once we got the conditions figured out, we had no problem getting consistent hits on the steel at 1,800 yards,” he said.

The big-bore possibilities of the XMCR platform as well as Cobb’s .50 BMG rifle are primary reasons the company was bought by Bushmaster, thereby making the new parent company players in the big-bore arena. It is not yet clear whether Bushmaster will continue to offer all of the custom options that Cobb did on these weapons, but there can be no doubt these firearms should prove popular with the crowd that likes hitting objects at ridiculously long range. Visit: Bushmaster.com.