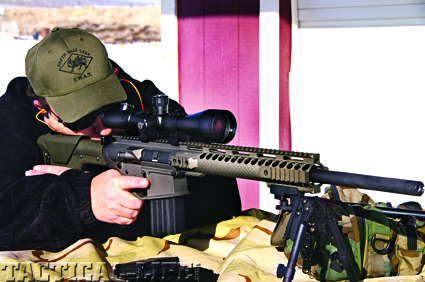 The glass was very clear and easy to pick up when behind the rifle.

The name attached to this scope, “Elite” has a varied and sometimes confused history. Bausch & Lomb was purchased by Bushnell in 1973 but marketed their Elite line using the B&L name. Bausch & Lomb had a long history of quality scopes. Their scopes with the “BAL” prefix made in the 50’s and 60’s even saw action on Vietnam Era sniper rifles. This was prior to the purpose built rifles that followed and it was not uncommon for hunting rifles and optics to be purchased state side and shipped over for use in the field. Probably the best example of a rugged scope for the time was the Bausch & Lomb 10x tactical, considered by many to be one of the most rugged scopes made.

This seems to be the start of the rugged, reliable tactical scopes by Bausch & Lomb/Bushnell. The 10x tactical was a purpose designed scope for the military and it was about bulletproof. It was not seen often in civilian hands but it had a tremendous reputation. I recall vividly the lashing I received years ago for questioning the quality of this scope by a friend of mine. He was a former Army Ranger who had extensive experience with this scope. The Bausch & Lomb Elite 4000 scopes were built in this vein and were very well respected. They are still scopes that many bench rest shooters use and looking at reviews in the late 1990’s, often beat out bigger names. These were rugged, reliable scopes with good glass and a solid reputation. List prices close to $900 at the time made these anything but “cheap” scopes. As the Bausch & Lomb name was dropped several lines of “Elite” scopes have taken on that mantle.

Currently the Elite line is broken down into the 3200, 4200, and 6500 series. All of these scopes feature multi-coated optics, and are 100% waterproof, shockproof, and fog proof. Most of the 3200 models are moderately priced hunting scopes with 1-inch tubes and varying reticles and power settings. The 4200-line offers 30mm tubes and some other power options. The 6500 series is the higher end of this line, offering their new push/pull style turrets, and a one-piece hammer forged tube. Amidst all of these lines are scopes that have a designation as “tactical.” As well as all the other features of the various series they include blacked out cosmetics and target turrets. Targeted for the police market, they are purpose built. Until now all of the scopes in the tactical series were second focal plane scopes of various magnifications. The subject of this test is their newest addition to this line with the reticle in the FFP (first focal plane). Adjustments in mils, and lighted reticles are available as well.

The scope fit nicely on the DMR 10 without clearance issues.

Currently the reticle on most scopes is located in one of two places. For many this is a matter of preference and the American market has been slow to catch on to the FFP. Until recently this was the purview of very high-end scopes, or a few European imports. My first experience with one of these imports was 10 years ago, before they became popular and about three times the cost. After using one for a period of time, there was simply no going back. For my purposes the first focal plane was perfect. The most obvious difference is the appearance of the reticle. In a second focal plane scope there is no visual change regardless of the magnification. This also means the ability to use the ranging reticle in the scope is restricted to one power. Ranging a target requires you to range at the power where it is accurate then return to the desired magnification for the task.

Mils & MOA
Another feature catching on in America today is the reticle and adjustments measured in mils (milradians). It is essentially the old metric game. For years the European scopes were all measured in mils. The US Military however adopted scopes that had mil reticles with MOA adjustments. This requires a conversion that one can do in their heads, or use charts and the like.

A scope that has both turret adjustments and a reticle measured in mils requires no mathematical conversions. It does require a conversion to metric total and some might have significant difficulty with that, but for me it was much easier. Once the elevation was determined for a particular range the adjustment could be held over in the scope or entered with the knobs. There was no need for conversion and only one number is memorized. On fast shots, especially in competitions, it was perfect. It is starting to catch on with most of the major companies now accommodating this need and providing more choices for tactical shooters.

Scope Details
The scope provided for testing is Bushnell’s newest offering in the tactical line. It meets the needs of those asking for a FFP scope that uses mil measurements. This is a 4200 series scope in the Tactical line. The 6-24x50mm was provided, but they also offer a 3-12x44mm. This scope has all the normal 4200 series side focus features with the addition of target knobs, .10 mil adjustments, and a lighted reticle. The lighted mil-dot reticle in this case is green.

It has a 30mm tube and the scope is blacked out in its entirety. It feels very solid in the hands. The turrets are very large and have a good solid feel. The clicks are tactile and definitive. Once some time was spent turning the knobs it was easy to determine how far they were moved without looking at them. The rheostat for the lighted reticle is attached at the top of the ocular where it is easy to reach. It adjusts smoothly without any clicking so it is pretty much infinitely adjustable. When activated the entire reticle (minus the bars) is lit up. Some reticles only light up a small portion in the middle, this one lights up the entire mil-dot portion of the reticle.

All in all this was a pretty impressive looking scope especially for the money. The glass was very clear and sharp and the focus on the ocular was easy to access. Magnification changes are made at the ocular lens and do not turn the whole lens meaning your covers stay in place.

Range Test
The scope was placed in a set of Warne Tactical rings and attached to my MGSS (Mike’s Gun Sales and Service) DMR-10. This rifle has proven consistent so far with a couple of other optics, so it was a fair test bed. If a scope is going on a rifle that saves lives it must be rugged, reliable and consistent without regard to price, brand name or design. Working scopes get used as often as once a week and it must be repeatable. Their precision is less an issue to me so long as they do the same thing every time. Testing started with turning the knobs from one extreme to the other, everyday for an entire week. It could be as simple as a couple times, or in one case it occurred over about a 30 minute time period watching television. The scope was mounted and then zeroed.

There is no elevation in the base or rings on this rifle so it zeroed pretty close to the top of the turrets range. Once zeroed at 100 yards there was 4.5 mils of remaining elevation. That equates to about 15.5-MOA up from zero. That gets you to about 500 yards but most use at least a 20-MOA base, which would get you as far as needed with a typical .308 for sure.

Once zeroed it held consistently over a three-day testing period. In between range days the knob turning continued and the cold bore was always within a 0.50 of an inch or so, meaning any deviation could just as easily be the rifle or me. This scope seems to hold its zero even after a ton of knob turning. These knobs are easy to adjust and solid when adjusted.

The reticle was easy to see and the dots are still clearly visible at 6-power. Having used scopes at about three times the cost where it disappears at that magnification this was a nice thing to see. There are no issues ranging at any power with this reticle and at 24-power the targets are about poke your eye out. Ranging known targets out to 500, yards it was consistent and as accurate as this shooter can be with a dotted reticle. As a police marksman ranging targets at 500 yards is mostly an academic exercise so it is not a personal expertise but this system is as accurate as all but the most precise scopes.

Final Notes
The bottom line here being the Bushnell Elite 4200 Tactical FFP 6-24x50mm is a really solid scope especially for its $999 retail price tag. My preference would have been the 3-12 for duty work but that seems to be the minority choice these days. Everyone seems to want spotting scope magnification on his or her tactical scopes these days. The glass was very clear and performed well in every test it was put through. It ranges well, consistent, and the knobs are easy to adjust and held their place over a couple of weeks of turning. The cold bore shots were all solid, which is the most important thing for a working scope. Bushnell has provided a well-priced solid platform in this FFP scope and it should serve any tactical shooter well. Check out the rest of their tactical scopes at bushnell.com or call 800-423-3537.

It Happened to Me!

The glass was very clear and easy to pick up when behind the rifle.…