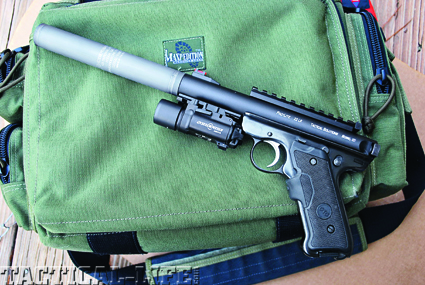 This Ruger MKII features a CTC LaserGrip and Tactical Solutions Pac Lite receiver/barrel unit. A SureFire WeaponLight and the Clandestine suppressor round out the package.

C3 Defense is a relatively new company that is fast making a name for itself for quality M4 receivers and rifles. C3’s CEO, Buzz Baker, was previously involved with Cobb Manufacturing before the purchase of Cobb by Bushmaster. From there, he formed C3 Defense. His manufacturing experience in CNC machining led him to explore the feasibility of an affordable, simple, and effective entry level .22 caliber suppressor to the market.

C3’s first suppressor was a budget-minded model that brought C3 into the market place at a retail price of $100 or so. However, Baker was not entirely happy with the technology and performance. He went back to the drawing board and came up with an improved suppressor called the Clandestine.

Suppressor Details
The Clandestine is an all steel suppressor that features five precision-machined “K” baffles that are sealed in a parkerized steel tube. The tube is comparable to other .22 caliber suppressors in size with an overall length of 6.5-inch and a diameter of an inch. Baker is quick to state that the Clandestine is a no bells and whistles suppressor when compared to some of the state-of-the-art, user serviceable units. However, it is a robust design that can withstand hard use and offers comparable sound reduction to the competition. Due to its steel construction, the Clandestine is rated for the 5.7 caliber and will actually handle the pressures of a .223. What really sets the Clandestine apart from other suppressors is the $199.99 suggested retail price. With many .22 suppressors costing upwards of $350, this price certainly makes the Clandestine worth a look.

When I received a sample Clandestine for the article, I immediately noticed that the welds were nicely finished, the coating was even and the engraving was sharp and precise. When compared to the typical aluminum suppressor, the Clandestine’s steel construction is immediately noticeable. It weighs 7 ounces while the Silencerco 22Sparrow weighs 4.7 ounces and the AAC Aviator weighs a mere 4.2 ounces. This additional weight is not necessarily a negative as it helps stabilize the host weapon.

Shooting Impressions
We first mounted the Clandestine on an older Ruger MKII that I had upgraded with a Tactical Solutions Pac-Lite upper. Tactical Solutions was the first company to offer a precision-made replacement receiver and barrel for the popular little Ruger pistols. The Pac-Lite is made from aerospace grade alloy with a 1-in-16-inch chrome moly liner making it extremely accurate. Options include fiber optic adjustable sights, fluted or non-fluted barrels in 4.5- and 6-inch lengths, and a host of colors. Both the top of the receiver and the bottom of the barrel are threaded to accept a Picatinny style accessory rail. More importantly, the Pac-Lite barrels are threaded at the factory to accept a suppressor.

On a cold and rainy winter day, we ran about 50 rounds of Federal 550 bulk pack through the Clandestine / Ruger combination. Due to the weather, we were shooting from under an awning, which amplified the sound somewhat. We compared the Clandestine to the 22Sparrow and Aviator. To the ear, the Clandestine may have been slightly louder but the difference was minimal. This surprised several shooters who were expecting an economical suppressor to provide economical performance. This was not the case.

After the storms cleared, we set up another range day to do a real side-by-side comparison and broke out two 20-year-old Ruger 10-22’s that had been given a second life. Each rifle had been retrofitted with Hogue over-molded stocks. The Hogue stock is a rubberized molded stock with a fiberglass skeleton for strength. It is extremely light and perfect for a trail or hunting rifle. They are available in a variety of colors to include black, olive drab, and tan.

Each rifle had also been fitted with a Tactical Solutions X-Ring replacement barrel. The X-Ring barrels are precision machined from lightweight 6061-T6 billet aluminum and have a 1-in-16-inch chrome moly button rifled bore for match accuracy. Our barrels were fluted models, which further reduced the rifle’s weight, and threaded to accept a suppressor. The X-Ring barrels are available in both threaded and non-threaded configurations. Finally, we had addressed the stock trigger by replacing them with a Timney trigger and a Volquartsen trigger pack from Brownells.

The two rifles allowed us to mount the Clandestine, the 22Sparrow and the Aviator for a side-by-side comparison. We used both standard velocity loads and sub-sonic loads from CCI. The results were surprising. There was not discernable difference in the sound of the Clandestine and the more expensive units. We did notice a very slight difference in tone but that is subjective and very hard to quantify. While this comparison was not scientific, I feel that the Clandestine would register very close to the Aviator or 22Sparrow in formal sound lab.

We also mounted the Clandestine on an AR57 upper that I had for testing. The AR57 is a complete replacement upper that fits directly to any M4/AR lower. The upper is precision-milled from a solid block of 7075-T6 aluminum. The Picatinny rails are integral to the receiver and allow the mounting of any of the normal accessories. As the name implies, the AR57 is in 5.7x28mm caliber that was developed by FN for the P90 PDW. The AR57 utilizes an FN type, 50-round magazine that feeds from the top and ejects the empties out through the magazine well. The SS197SR round is a 40-grain V-Max bullet that has a muzzle velocity of 2,100 fps (feet per second) from the AR57’s 16.5-inch barrel.

On the range, the AR57 ran like a Swiss watch. We mounted an ACOG on the rifle and were able to plink quarter size objects at 100 yards with surprising regularity. The AR57 comes with a muzzle brake that is threaded to ½x28. We removed the muzzle brake and threaded on the Clandestine in less than 5 minutes. The 5.7’s muzzle crack was tamed by the Clandestine making it very comfortable and safe to shoot. There was no shift in the point-of-aim/point-of-impact shift when we installed the Clandestine. The author fired a 50-yard group of 10 rounds, 5 unsuppressed and 5 suppressed. The group measured less that 0.75 of an inch. Firing an unsuppressed shot makes one appreciate just how well that little 6-inch tube works.

Final Notes
The Clandestine scored high marks in both performance and value. There is not much in the firearm’s market that $199.99 will buy you. I think it is a real winner that may well change the dynamics of the suppressor market. C3 Defense already has plans to introduce several variations of the Clandestine to include a user serviceable unit and a lightweight aluminum unit. In addition, there are plans in the near future for centerfire rifle and pistol suppressors. It looks like C3 Defense will be a company to keep an eye on in the next several years.