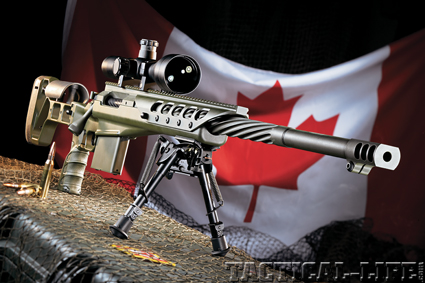 The PGW Timberwolf in .338 Lapua has been selected as the Canadian Force’s medium range precision-fire rifle.
Comment(s)

Canadian warriors have fought alongside American troops in the trenches of the Somme, the islands of Alaska during WW II, the beaches of Dieppe and Normandy, defending the Western Approaches, and from the frozen wastes of Korea, to the miserable jungles of Vietnam and the sands of Iraq. Canadian Forces, although fewer in numbers, have fielded professional and motivated warfighters since 1884 when the Canadian Army was founded in Fredericton, New Brunswick. Today, near that very spot where the first Canadian Infantry mustered, is the CFB (Canadian Forces Base) Gagetown, the largest of its kind in The Great White North.
CFB Gagetown is where new Officers and boots right out of basic training are taught the combat arms. Part of this small, efficient organization is the Combat Training Centre, Infantry School, Advanced Sniper Course that is offered once a year by the Infantry Training school’s Sniper Cell.

Building The Best Snipers
To be selected for the Basic Sniper Course, the trainees must first go through a battalion-level course to qualify as a basic recon patrolman, apply to the sniper group and be screened by the UMS (Unit Master Sniper) via a physiological, legal and conduct evaluation before being invited to attend a two-week pre-course. Fourteen of 22 passed a recent pre-course, just to enter the eight-week, battalion level, basic sniper course. The sniper trainees are assessed every evolution, every day, so that the course has a very high failure rate; One course passed three trainees out of 14. The snipers are then assigned to an 18-man sniper group attached to each infantry battalion under a Warrant Officer who is the UMS. The group is further broken down into two, eight-man sections with four-man operational detachments or “dets.”

The advanced course at the Gagetown Infantry School takes up to 18 Sniper Detachment Commanders from the infantry battalions and brings them to the next level of proficiency, the Unit Master Sniper. The UMS is not only a superb shooter and tactician but has the logistical, financial, mission-planning and liaison responsibility with higher echelons to ensure that his snipers are effectively employed. One task that the UMS has to perform for his detachment, and is exercised at the advanced sniper school, is to set up complex ranges to maintain proficiency or to practice for a specific mission. One such evaluated task was witnessed at Gagetown when a sniper team of UMS trainees had to develop, order materials, construct and run a specific shooting scenario. They were given a task to place a sniper/spotter team in a realistic situation where the spotter could see the target, but the shooter could not. The spotter had to radio the shooter, by use of specific, immediate landmarks, where to place his point of aim on a point that would ensure that the round would hit the obscured target. This “offset shooting” scenario was built and successfully used by another UMS trainee sniper team to actually produce a first-round hit on a distant target that the sniper never saw.

Canadian warriors have fought alongside American troops in the trenches of the Somme, the…