by Garrett Lucas
in Guns, Handguns
0

Hot on the heels of its METE line of pistols, Canik has already hit the ground running. For 2022 its latest competition pistol is the Canik SFx Rival. 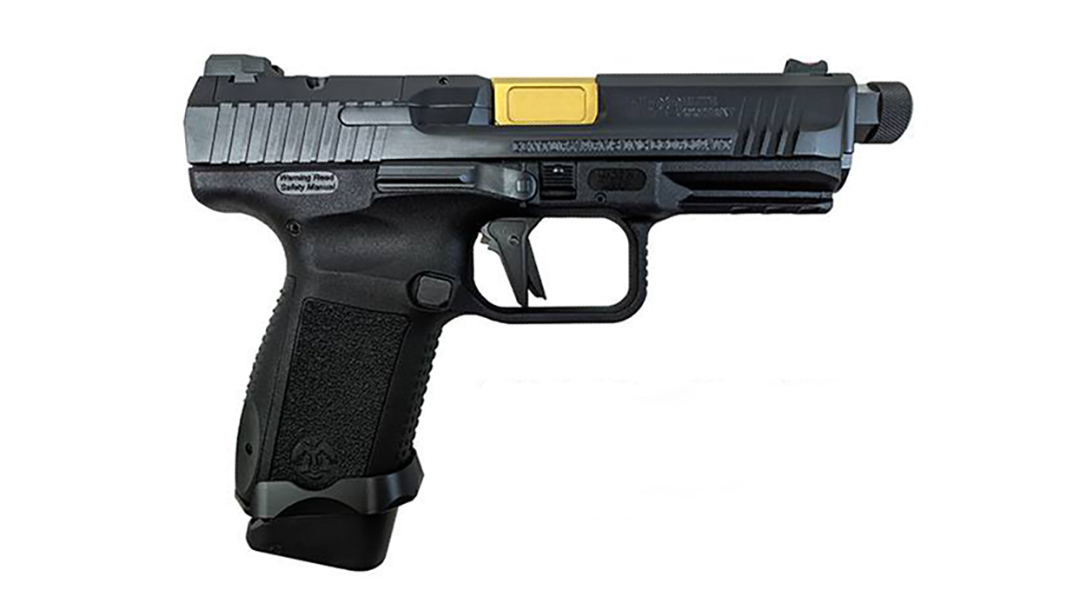 While sharing the same foundation as the METE SFx, the Rival was built to offer the match-winning features of a high-end competition pistol. Doing this without the buyer having to pay a high-end prices is tough but possible. In fact, the SFx Rival was specifically engineered to be able to compete in the shooting sports without any restrictions.

The most noticeable upgrades are the stylized barrel and the very aggressive slide serrations. While comfortable to engage, the serrations offer an extremely secure purchase on the slide for confident manipulation. The slide also hosts a sight arrangement that includes a blacked out adjustable rear sight. This pairs with a fine fiber-optic sight up front.

Additional competition features include a reversible and extended magazine release. This comes with three different height extensions to tailor the release to the individual user. The SFx Rival also comes with an aluminum magazine well. This is unlike the polymer one like found on the METE series of pistols. It also arrives with two 18-round magazines that have swappable aluminum or polymer basepads.

Put a Flatty in that Baddie

Perhaps the most impactful upgrade is Canik’s 90-degree, flat-faced aluminum trigger. The Rival features a lighter, even better trigger than the METE line. The trigger on my review pistol featured a very clean take-up and crisp break at just 3.68 pounds of pressure. Even better, the trigger also offered up an exquisitely short reset for those fast follow-up shots. The SFx Rivals trigger is easily one of the best striker-fired triggers on the market. Only Walther’s Dynamic Performance trigger being its equal.

Since the SFx Rival is intended to be a competition pistol, the slide is machined to accept a red-dot optic. It comes with a serious optics accessory package as well. Rather than use the polymer adapter plates that are shipped with its METE pistols, Canik includes four aluminum optic adapter plates for the most popular optics on the market as well as the necessary hardware to get everything securely mounted.

However, the Rival offers the same great ergos and attributes as the METE line including the more aggressive texturing, ambi slide stop and double undercut trigger guard for a higher grip and improved shooter comfort. For those wanting something with a more subdued appearance, Canik offers the Rival Dark Side model that has an all-black finish and is supplied with an additional optics mounting plate that integrates a rear sight.

Despite its low MSRP of just $679, there are no shortcuts to be found in the SFx Rival whether you’re looking for features or performance. I had a few friends along to give it a go at the range and every single person mentioned how flat the pistol shot. There was every little muzzle flip so the shooter could stay on target easier for multiple-shot strings. Part of this, I’m sure, is due to the grippy texturing on the Rival that was borrowed from the METE line. It locks the shooter’s grip in as tight as a bank vault for exceptional control.

The other big hit was the flat-faced trigger and the light break. One friend, Addison, works at a local gun shop and knows his way around pistols. He said the SFx Rival is the best Canik pistol he’s ever shot and has the best trigger of any striker-fired pistol he as ever tried. He especially liked the flat-faced trigger and its accompanying safety which allowed him to get a bit higher on the trigger while still ensuring the safety was engaged.

As far as actual shot delivery, the SFx was dead-nuts reliable and extremely accurate. I’ve reviewed several Canik pistols thus far and the only malfunction that has ever occurred was due to a new shooter limp-wristing that particular pistol during fire. Other than that, every Canik pistol I’ve tried has been unfailingly reliable, just like the SFx Rival. As far as accuracy goes, the Rival absolutely delivered the goods in this regard as well.

I prefer to use a red dot when I can while I’m shooting groups. My aging eyes need that extra help for me to turn out the best results. However, I didn’t have the necessary screws on hand to mount the supplied Mecanik red dot for this initial review. Even so, with me just using the iron sights from a bench at 25 yards, the SFx Rival routinely turned in groups in the 1.5- to 1.75-inch range with ammunition from Federal Premium and Hornady.

I’ll be doing a more complete assessment of the pistol in Combat Handguns when I can get a red dot mounted. As good as the results were with the naked eye, I’m excited to see what the results will be when I can drill in more precisely with the help of a red-dot optic. If it’s anything like my METE SFx with a red dot, it’ll shoot like a laser.

As uncompromising with performance that the Rival is for the price, the package offers even accoutrements to pack in even more value. Aside from the competition features like the mag well, extended magazine release and aluminum magazine baseplates, Canik offers a few other items to get the shooter rolling quickly. The Rival ships with a punch for easy disassembly, three backstraps for a custom fit, a cleaning rod and cleaning brush, and a toolkit with screws, bits and extra fiber-optic pipes. The final touch is a speed-cut holster that can be adjusted for cant and belt size.

It’s hard to say enough good things about the new Canik SFx Rival, especially considering its features, accessories and its level of performance for the price. Yes, it’s absolutely a fantastic pistol for the beginning competitor to pick up for their first stab at competitive shooting, especially if there are budget restrictions. However, with its top-shelf features and stellar performance, it quite simply might be the only competition pistol you’ll ever need.