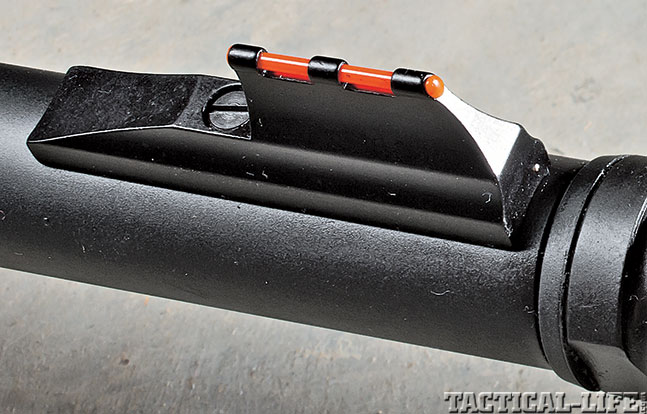 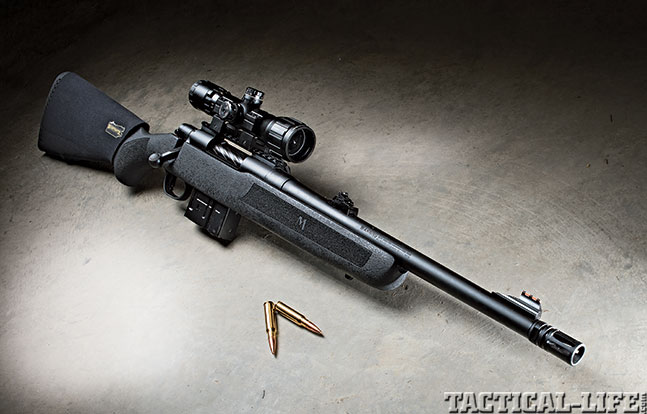 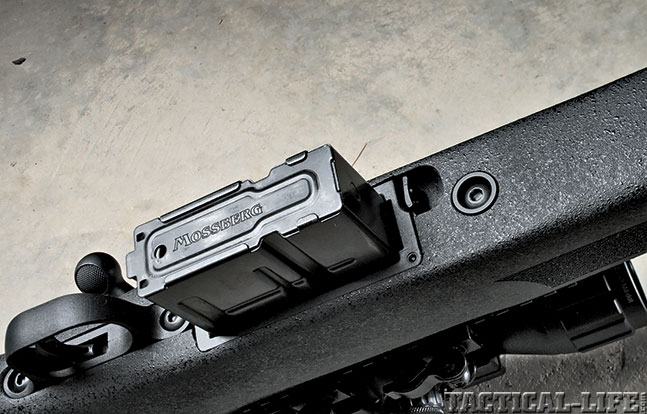 3 of 6
Carbine Testfire: The Mossberg .308 MVP
Mossberg ships the MVP Patrol with a 10-round, steel magazine that is durable, easy to load and positively retained. Note the release tab just ahead of the magazine. 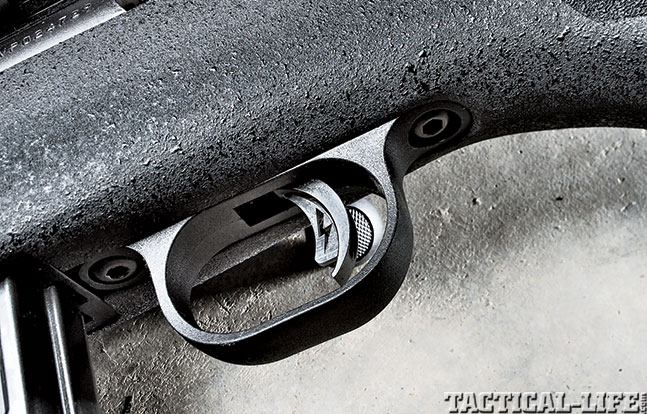 4 of 6
Carbine Testfire: The Mossberg .308 MVP
The Lightning Bolt Action trigger is drop-safe, clean and adjustable from 2 to 7 pounds with just a screwdriver. 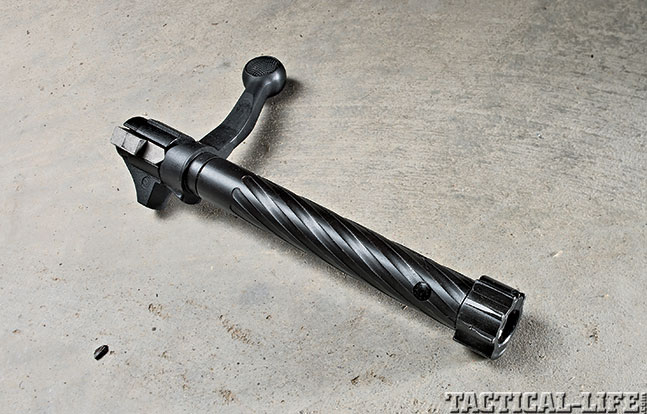 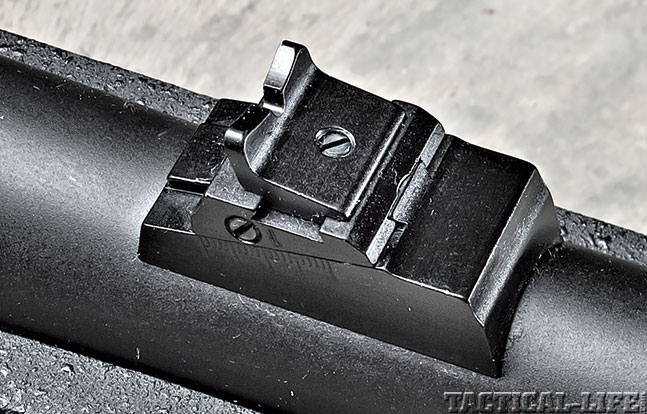 6 of 6
Carbine Testfire: The Mossberg .308 MVP
Mossberg offers the MVP Patrol with an adjustable rear sight (right) to back up a mounted optic. 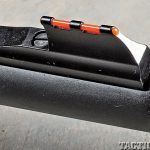 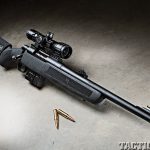 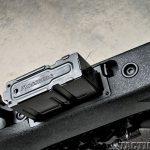 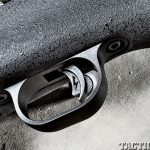 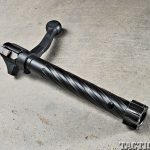 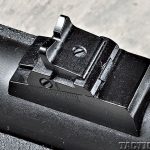 To be frank, I’m not too proud to admit it when I occasionally overlook a good thing and find out later that I did. The “good thing” in this context is, as you’ve probably noticed, Mossberg’s latest version of the MVP series of bolt guns introduced in 2011. First produced in 5.56mm NATO/.223, the MVP featured an innovative bolt head design that allowed the rifle to use standard AR-15-style magazines, and that’s my excuse for not paying more attention back then. I had limited interest in a bolt-action centerfire 5.56mm and let it go right on by.

I duly noted the positive reviews as time passed, but it wasn’t until the introduction of the 7.62mm NATO/.308 Winchester Patrol version last year that the MVP began to grab my attention, and when I stopped by the Mossberg booth at a large industry trade show in early 2014, one very businesslike specimen stood out clearly: the scoped MVP Patrol package. Yes, Mossberg offers the MVP in other patterns and configurations, including a neat “Flex” model with quick-detachable stock options, but on a bolt gun intended for fast and dirty “get me out of this” applications, I like a carbine with a solid stock and compact overall dimensions, and this one’s undeniably that gun. End to end, Mossberg’s taken several good ideas and merged them into one capable little carbine that should be very much at home in a cop car. If you’ve been a shade slow on the uptake with these, like I have, you may want to look a little closer.

The first MVPs used a two-lugged bolt with a unique hinged “trapdoor” section on the bottom of the bolt face that dropped down to engage a 5.56mm case rim for reliable feeding from a standard-issue or commercial AR-15 detachable box magazine, giving it as high a magazine capacity as any “tactical” semi-auto based on that military platform. Adapting a bolt-feed action to an auto-feed magazine isn’t all that simple, and Mossberg’s solution was both ingenious and successful. The 5.56mm MVP Patrol was accepted quite well, but it generated an obvious question among the market segment who wanted more horses under the hood: When’s the 7.62mm version coming out? Mossberg listened, dusted off the drawing board, and the result is very much out now.

The 5.56mm’s trapdoor was replaced by two narrow, raised “ramp” sections milled into the bottom of the bolt, with the highest forward ends raised slightly above the underside of the bolt head enough to serve as two “push-tabs” between the locking lugs in sliding a 7.62mm case forward out of the magazine and into the chamber. The MVP Patrol uses a conventional pivoting extractor and plunger ejector in its bolt face, with a checkered bolt handle knob, and the bolt shaft itself is spiral-fluted to keep on chugging through the frequently hostile world of hard-use field conditions. For cleaning and disassembly, the bolt release is a depressible tab on the left side of the action, and the two-position swiveling safety is positioned across from it on the right side—forward for “fire” and rearward for “safe.”

A prominent enough component of the MVP action to warrant separate mention, the MVP Patrol carbine’s Lightning Bolt Action (LBA) trigger, developed in 2008, is user-adjustable from roughly 2 to 7 pounds with a simple screwdriver, and features a distinctive trigger blade with a lightning bolt cutout inside the actual trigger. This blade blocks the sear from releasing the carbine’s striker unless it’s fully depressed, which acts as both a drop safety and an accidental-discharge safety if the trigger’s knocked from a side angle by some extraneous object that might otherwise jar it far enough back to fire. Both the blade and trigger are steel, and ride inside an easily removable and easily replaceable polymer trigger housing. The pull on my test sample was factory-set at 2.75 pounds, with a barely perceptible hint of travel before a very clean let-off and zero overtravel. In fact, it’s one of the best factory triggers I’ve worked with.

Moving on, the little carbine projects a very solid “I can handle it” impression, weighing in at 8.5 pounds (minus an optic) with a 16.25-inch, 1-in-10-inch-twist, medium bull barrel and reassuringly hefty furniture in your choice of black or tan with textured sections at the wrist and forend. Its synthetic-looking stock is actually wood with a coarse finish painted on it, which explains the absence of that “hollow” feeling that typically comes with synthetic versions. The matte blued barrel features 5/8×24 threading and comes fitted with an A2-style birdcage flash suppressor that is closed at the bottom to prevent kicking up dust while firing from a prone position. This threading is a common thread pitch for 7.62mm sound suppressors, by the way, if that’s of any interest, and if it’s not Mossberg also includes a muzzle cap thread protector in case you don’t want the extra length of the flash suppressor, either. On both the basic and the scoped models of the MVP Patrol the factory includes a Picatinny rail for mounting optics, and there’s a very functional, ventilated, black rubber recoil pad behind the neoprene Beartooth cheek-warmer sleeve on the buttstock. Sling swivels are also included.

The basic MVP Patrol carbine comes equipped with a set of open sights—an orange fiber optic up front and a Williams fully adjustable ramped rear. The sights are quick to acquire, the fiber-optic front sight is quite visible in low-light settings, and the setup is easily good out to 200 yards or so—farther with some holdover practice. The scoped MVP Patrol package adds a UTG 3-9x32mm BugBuster scope with a 1-inch tube, zero-resettable target turrets for quick finger adjustments, 0.25-MOA click adjustments, a mil-dot reticle for range estimation, an adjustable objective for parallax-free viewing at 3 yards to infinity, a useful choice of either red or green full reticle illumination and variable brightness levels, a 2-inch sunshade, flip-open lens caps, and quick-detachable alloy rings with steel locking levers. Obviously, the optic can extend practical engagement distances well beyond 200 yards, if needed, even with such a short barrel.

Capacity takes third position in a “tactical” rifle or carbine for many professional applications, right behind reliability and accuracy, but it does matter. In a long-range bolt gun, it’s not quite so important, but for relatively close-in encounters where time stretches out and there may be group opposition, it certainly can be, and for that reason any LE or home-defense carbine benefits from having more than five rounds on board. Half a box of ammunition already in there is a bonus from the get-go, and being able to swap in 10 more rounds all at once instead of single-loading a traditional bolt-action is a double bonus.

Understanding this market demand, one primary feature Mossberg was going for in these little carbines was capacity, and the MVP Patrol comes with a proprietary 10-round, steel, detachable magazine manufactured in-house by Mossberg. Having worked with two high-dollar precision 7.62mm rifles in the past year that sported price tags more than double the scoped MVP Patrol package’s suggested retail price of $863, and found both mags on those to be more than slightly user-unfriendly to load, the Mossberg magazine was a very pleasant surprise. Besides being quite sturdy, it loads just like a typical double-stack military mag, which means straight down from the top, between the feed lips, and cartridges don’t have to be coordinated with three hands and slid in under the lips from the front while trying to keep the round just below that one from jumping ship at the same time. Mossberg’s done well on this magazine, and ups the ante further by offering five-rounders for hunting and 20-rounders for extended social encounters.

Something else guaranteed to appeal to many potential tactical 7.62mm bolt-action buyers is that the MVP Patrol can also run with M14/M1A military magazines and LR-308/SR-25-style magazines. Lockup is accomplished via a tab that sits flush inside a stock recess directly in front of the magazine, which is another feature I like. It’s admittedly a trade-off; the recess is too small for a gloved finger, but the upside, by my thinking, is that there’s no way an exposed mag button (AR style), external lever (AK style) or enclosed lever (Mini-14 style) can be bumped, banged, knocked or jostled into dumping a magazine during a high-stress activity. Easily accessible by either hand, this is very positive retention and is still fairly quick to access during a reload sequence. Remember, the carbine isn’t intended to fill a squad automatic weapon role, and having the magazine firmly in place when the flare goes up instead of a gapingly empty mag well is far more important than a half-second reload capability.

I tested the scoped MVP Patrol’s accuracy by firing three different loads from a rest at 100 yards. The 168-grain Winchester Silvertips created the best three-shot group, which measured 1 inch exactly. The lighter Speer 150-grain LE Gold Dot rounds took second, and the heavy 175-grain Black Hills Match ammo came in third through the short barrel. The UTG glass was clear, and even though it’s not a high-priced scope, its performance was more than adequate on the Mossberg. The optics mounting system and backup sights are strong features for a little carbine like the MVP Patrol.

The MVP Patrol is a compact package (including a scope and backup sights) that has low-light utility, solid heft, high-capacity mags, an excellent trigger, very tolerable recoil, a free-floated barrel, a flash suppressor, 7.62mm power and more than enough accuracy and range to reach out at typical LE distances with confidence.

While a bolt gun’s certainly not the first choice for clearing a home or building, the handy MVP Patrol’s trim size gets it out of a car and around tight corners quickly when needed, and it offers serious firepower in a relatively small carbine. If power and portability matter to you, this Mossberg’s a contender.