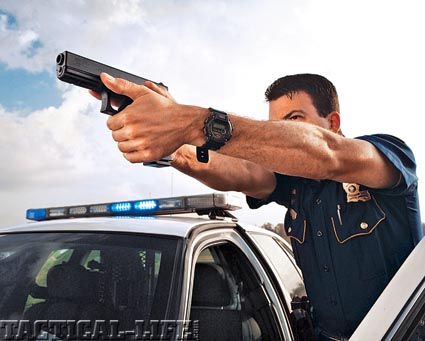 While many of today’s pocket pistols are reliable and can get the job done when you’re off-duty, it makes sense to carry the full-size gun you’ve trained with the most on-duty. Steve Woods photo

A cop from an Illinois police department was out west teaching a class, and it was legal for him to carry a weapon under the Law Enforcement Officer Safety Act. After class, he found himself in a restaurant parking lot, where he saw a criminal stabbing a victim. The cop was carrying a full-sized service pistol, a Smith & Wesson M&P40. He drew his gun and identified himself. Without stopping, the knife-wielder raised his blade for another potentially fatal thrust. Swiftly and surely, the out-of-town, off-duty officer stopped the attack then and there with expertly directed gunfire. Consider this Case One.

Case Two took place in an Eastern metropolis. An off-duty cop was in a “Mom ’n Pop” corner store at closing time when two armed robbers entered. One had a knife, the other a gun, and they made it clear that they were going to use their weapons on the owners, purely for the evil joy of it. But the off-duty cop was carrying the same pistol he wore in uniform—a Glock 19. He swiftly drew it from concealment and dispatched both of them, saving two good people’s lives.

When the time comes and you have to draw from under “soft clothes,” whether you’re working plainclothes, undercover, or simply off-duty, it makes sense to have a gun powerful enough to stop the fight—a gun large enough and easy enough to manipulate, allowing you to shoot your best under extreme stress. For most officers, that gun is their uniform service pistol, the gun they have probably carried the most, trained with the most, and most frequently used for qualifications.

Learn from the Best

In Case Three, legendary Texas Ranger Frank Hamer, the man who took down Bonnie and Clyde, was out with his wife when a hired assassin opened fire, wounding Hamer. Hamer drew a big Smith & Wesson Triple Lock and put a .44 Special bullet through the heart of the man who shot him, decisively winning the fight. Throughout his career, Hamer carried big handguns all the time, 24/7, including Colt Government semi-autos in .38 Super and .45 ACP, and his favorite, a Single Action Army .45 he nicknamed “Old Lucky.” That gun, with a 4.75-inch barrel, was said to be his daily companion in his old age after retirement. 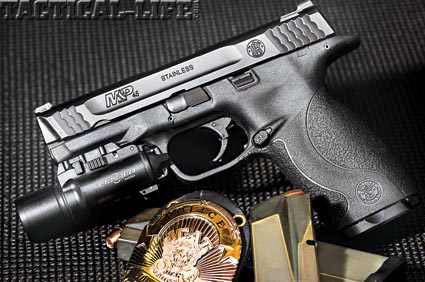 Many concealed carry holsters are available even for duty-sized guns, like the Smith & Wesson M&P45.

In Case Four, famed NYPD Stakeout Squad alumnus Jim Cirillo wrote gratefully of the day his partner, Bill Allard, saved his life with a single bullet to a gunman’s heart, delivered from a 5-inch-barreled National Match .45 that Allard had special permission to carry. In another incident, what we’ll call Case Five, Allard used the same .45 auto to finish a hellacious gunfight that had partially depleted one police shotgun, drained another and emptied a service revolver before both of the heavily armed robbers were dead on the floor. Yes, both of those cases happened while on-duty, but today, Bill Allard is long retired and still carries a full-sized .45. In fact, he was wearing a 5-inch-barreled Kimber pistol the last time he and I had dinner together in upstate New York. You don’t get much more off-duty than being retired, and all off-duty cops can learn from Bill’s example. 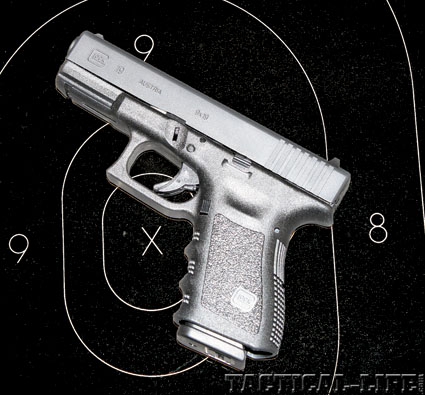 Many concealed carry holsters are available even for duty-sized guns, like the Glock 19.

Case Six begins with the Illinois State Police. In 1967, the ISP became the first large department in the United States to adopt a semi-automatic pistol as a standard-issue service sidearm, the 9mm Smith & Wesson Model 39. Many people do not realize that this decision came largely from the fact that Sgt. Louis Seman, then head of the ordnance section of the ISP, had noted that troopers’ shooting skills in qualifications were dismally lower with the 2-inch-barreled .38 revolvers (then standard for plainclothes and off-duty) than with longer-barreled service revolvers. When the Model 39 was adopted and made the only authorized gun for troopers for off-duty and plainclothes carry, average qualification scores actually increased overall. The department later allowed other options for off-duty carry, and today they issue .40-caliber Glock 22 and 23 pistols. But the larger point to remember: A service gun worn by a detective or off-duty trooper gave them a better advantage in a gunfight than a little-bitty hideout gun.

In Case Seven, we take a look at the New York State Police. Until the 1950s, the NYSP carried huge .45 Colt New Service revolvers, subsequently switching to big N-frame S&W .357 revolvers. In the 1980s, when they became the first state police force to adopt the Glock 17 in 9mm, they required their detectives to carry the same full-sized pistol as their uniformed troopers. In the 21st century, the NYSP changed to the Glock 37 pistol in .45 GAP in its full-size, 4.5-inch format, and still required their plainclothes detectives to carry the same gun. Experience has proven that it’s possible to carry a full-sized Glock comfortably and discreetly concealed. The logic is very simple: what a working investigator in plainclothes can do, an off-duty officer in plainclothes can do as well.

When a violent felony takes place in front of you, the part of you that’s a cop 24/7 will kick in. At such a moment, you don’t want a vestigial gun. You don’t want a symbolic gun. You want a fully capable combat handgun!

Today’s police service pistols are lighter, flatter and more concealable than ever. Today’s concealment holsters are more discreet and comfortable than ever. Carry a full-sized service pistol on your own time, along with spare ammunition, and remember that your duty gun is the one your department has most thoroughly documented your competency with. It makes more sense today than ever before. 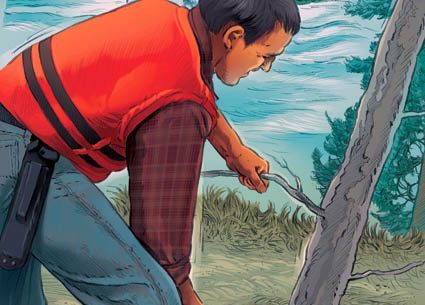