by Paul Evancoe
in Guns, Rifles
0

A primary objective for the Department of Defense is to reduce the soldier’s load. Weight factors into everything from the soldier’s kit—from his assault rifle to the ammunition quantity he carries. There have been several initiatives to replace brass-case ammunition with lightweight caseless ammunition, or even polymer-case ammunition, that can be fired from existing military weapons. While it may appear plausible, accomplishing this is a challenging battle with thermodynamics and the laws of physics.

Case History
Replacing the existing battle rifle with a completely new generation assault rifle based upon caseless ammunition has both political and physical implications. NATO interoperability is required by law, and it is unlikely that every member country would replace its war-fighting arsenal with a common caseless ammunition-type weapon. Secondly, even if NATO would unanimously agree to adopt such a replacement weapon (and by treaty unanimous agreement is required), there are other limiting factors averting their departure from conventional military weapons and ammunition. 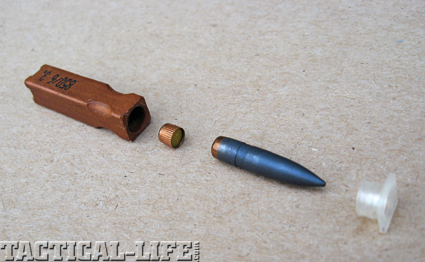 HK’s caseless ammunition employed a conventional bullet encased in a block of solid propellant with a primer ignition.

There have been several attempts at introducing new weapons that use caseless ammunition. One of the better-known rifles, the G-11, was developed by renowned German arms manufacturer Heckler & Koch. The G-11 was on the cutting edge of caseless ammo design and yet it failed to catch on, never going into full production. One reason was because DoD has never adopted a bullpup-style assault rifle. Another reason was that the G-11 fired radically different, non-standard, non-milspec caseless ammunition—even in a perfect world, adding another ammunition type to the military’s inventory takes many years, if achievable at all.