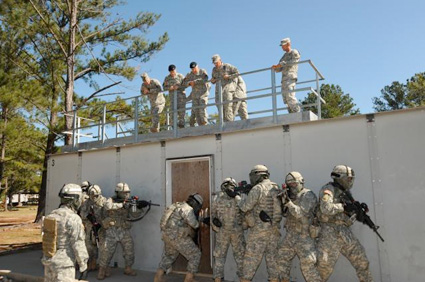 Gen. George W. Casey Jr. got an aerial peek at the massive expansion effort under way for the Maneuver Center of Excellence and observed urban combat training on Sand Hill. Along the way, he toured the National Infantry Museum for the first time and re-enlisted five Soldiers – including two Purple Heart recipients – at the ‘Follow Me’ statue in front of the museum.

“It gives me great pleasure to re-enlist these Soldiers, and keep their families on the team,” he said. “As an Infantryman, coming back to Fort Benning is like coming home. Every time I fly around the post, or drive around this post, there are great memories.”

Casey discussed Army recruiting benchmarks, efforts to increase time between deployments and the impending unification of the Infantry and Armor centers at Fort Benning.

Last week, the Pentagon announced the Army and other service branches – along with their respective Guard and Reserve components – met or exceeded recruiting goals in fiscal 2009. The Army added 70,045 new Soldiers, or 108 percent of its targeted number of 65,000.

In the past year, about 300,000 Soldiers either re-enlisted or signed up in the Army or its two Reserve components, the general said.

“Retention continues to be through the roof,” he said. “What you saw these Soldiers do here today, that happens all across the United States Army. I’m very pleased with our recruiting and retention.”

Casey said the Army’s growth should aid plans to boost so-called “dwell time” between downrange deployments. By the end of fiscal 2011, officials still want to follow up year-long tours to Iraq and Afghanistan with 24 months back home for the active force and four years in the rear for Guard and Reserve troops.

On a helicopter tour, Casey received a progress report while reviewing the new housing construction and Base Realignment and Closure projects tied to the 2011 arrival of the Armor Center and School from Fort Knox, Ky.

“There are places that a year ago were just woods,” he said. “It was very helpful for me to get past the PowerPoint slides and actually see the buildings growing out of the forest.”

Casey said the Infantry-Armor merger fits into the Army doctrine that’s been rewritten in the eight years since Sept. 11. Leaders want formations to “simultaneously apply offense, defense and stability” concepts, he said.

“We call that full-spectrum operations (and) all Army maneuver formations will operate like that,” the general said. “And we have to do that across the spectrum, from conventional war all the way to peacetime operations. This will help us come together and it will be much better, because all of our maneuver forces are going to maneuver similarly, particularly in the kinds of operations that we’re conducting in Iraq and Afghanistan.”

“You can’t look these young men in the eye and not feel proud about our country,” he said.

During Casey’s stop at the $100 million National Infantry Museum and Soldier Center at Patriot Park, he got a look at “The Last 100 Yards,” the museum’s signature exhibit – which depicts life-like scenes from eight wars.

“This is probably the most moving museum I’ve been in than any time in the last five years,” he said. “It’s a wonderful tribute to the Infantry.”

As Rangers who served in World War II plan a reunion in Columbus this weekend, Casey said he’s still stirred by the interaction of young and old Soldiers alike.

“We stand on the shoulders of our predecessors,” he said. “What you see is, we’re such a lucky country because generation after generation of American men and women believe so much in the values and ideals this country stands for that they’ve been willing to die for it, and that’s what the Army is all about.”