WASHINGTON– An innovative restoration program in Afghanistan is giving troops the tools they need to “stay in the fight” by helping them overcome the stresses and challenges of being deployed, the director of the Freedom Restoration Center at Bagram Airfield there said.

Army Capt. Donald Hawkins and his five-man staff have been reaching out to U.S. military units and servicemembers throughout the country since the center’s doors opened in February. The program offers a variety of classes to keep troops resilient and give them the confidence and competence to return to duty, he said.

“The whole goal of the restoration program is to allow soldiers to learn the tools and resources that they need to face the challenges they have while deployed,” Hawkins said. “We want to reduce the number of soldiers being returned to the states, therefore conserving the fighting force in theater.”

The program focuses on classroom education, but emphasizes the importance of normalized sleep habits and maintaining a healthy diet. Participants also are separated from their unit while attending the three-day program, so they’re not distracted by work schedules and having to deal with their command, Hawkins, an occupational therapist, said.

“In the program, they can focus on their issues and their stressors and the challenges that are troubling them without any distractions,” he said. “The goal is to get them back to their unit confident and competent.”

The program is completely voluntary, Hawkins said. Troops who experience high levels of stress usually are referred to the program by their chains of command and combat stress teams at the forward operating bases, he explained.

As of July 14, 74 military members had participated in the program with only two soldiers not returning to duty. One had experienced heavy combat and suffered severe post-traumatic stress. The other was contemplating suicide, Hawkins said. Both were medically evacuated to seek further treatment at military mental health facilities in the United States.

But not all of the program’s participants suffered combat stress. Hawkins noted that although combat stress is a serious issue that has been addressed in their program, most of the troops they care for are stressed for other reasons.

Relationships and financial issues, as well as the stress of being separated from loved ones for an extended period, are the more likely issues servicemembers are dealing with. Such stresses can cause depression and are more likely to affect more servicemembers more often and prevent them from functioning normally, he explained.

Hawkins and his staff touch on a variety of topics in the program including positive thinking, resiliency, depression and grief, anxiety and post-traumatic stress, relationships, goal setting, communication and problem solving, stress management, anger management, and occupational therapy and physical fitness. The question for participants, he said, is “If someone has a little depression, behavioral or anger issues, how does that impact their life, and how do they restore normal function?”

When troops are deployed and away from their family, they still must focus on a normal, healthy lifestyle, Hawkins said. Servicemembers dealing with stress have to learn how to cope with their issues before they can be an effective part of their unit.

Army Spc. Valerie Chandler is a cook with the 563rd Aviation Support Battalion from Fort Campbell, Ky., deployed to Bagram. She went through the program in May, about three months after returning from emergency leave for her older brother’s funeral in St. Petersburg, Fla.

Chandler’s supervisors noticed a sudden change in her behavior and mood and suggested she speak to a chaplain. She eventually agreed to go to the restoration center, but remained skeptical about how she would benefit from a three-day program, she said.

“I was scared to go to the program and wasn’t in the mood to talk to people I didn’t know about my personal life,” she said. “But it really helped to know they were there when I was ready. The courses helped in areas you didn’t even realize you needed help with, like relationships.

“The program really helped just knowing that someone’s there,” she continued. “They don’t judge you, they don’t force you to talk, [and] they’re just always there. And the classes, especially for someone like me, are a good distraction to keep your mind off of the things that were stressful to me.”

Chandler added that people should be open to programs such as this and not buy into the stigma of a “program” for mental health. “I didn’t want to go, but when I did, I learned and gained a lot from it,” she said.

Three days of education and talking with people goes a lot further than most would guess, said Air Force Staff Sgt. Codi Bowman, a mental health technician and program instructor at the Freedom Center.

“Three days may seem like a short time, but once you’ve seen the program in action and the results it has produced, you’ll understand,” Bowman said. “It’s amazing how much they progress in three days. By the time they leave here, they’re really comfortable and smiling and happy.”

Usually the first day of class, Bowman said, most participants seem depressed or stressed out. But by the middle of the second day, people begin to laugh and make jokes and become a little more comfortable with opening up. Part of her tactics involves teaching the participants to laugh and make the best of their deployment, she said.

“It’s not just about teaching classes, it’s trying to get them to laugh and maybe have a different lifestyle than what they had before and having a positive outlook on life,” she said.

However, Bowman and the other instructors make sure the participants know and understand that once they return to their units, the stresses and rigors from their job and being deployed will still be there. The difference is their abilities to cope and deal with them, she said.

“One of the biggest things we try to stress is that you are going to have to go back to your exact same unit with the exact same people, and the only thing you’re going to be able to control is you,” she said. “You really need to focus on changing you and learning to deal with your stressors and chain of command. You can’t change how they’re going to act, but you can concentrate on changing the way you’re going to react.” 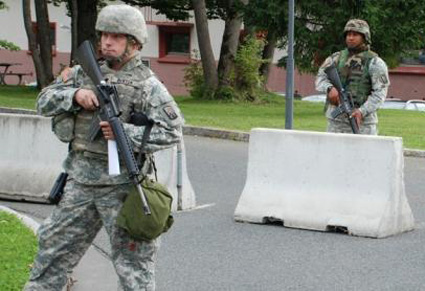