by Dave Bahde
in Guns
0

As import restrictions began to tighten on AK parts kits, the American market picked up the slack. Barrels and other parts made in America have improved and continue to increase in number and popularity. While it used to be cheaper to import military-surplus parts regardless of origin, American-made parts have become much more affordable in recent years.

Although some imports are still around, especially pistol variants, AKs that use American-made receivers and a smattering of imported parts are pretty common nowadays. These guns cost a bit more, but their quality is often high. It was only a matter of time before complete American-made rifles became available, especially those with receivers CNC-machined from billets of steel, and some of the best come from Century Arms.

Century Arms is best known for offering extremely affordable imported weapons, so it was a little surprising to see the company begin offering U.S.-built AKs as part of its C39 series a few years ago. Now these AKs have been around for some time, and they’ve become very popular. The company currently offers its semi-auto C39v2 rifles in a variety of configurations, but I got my hands on an earlier C39 for testing.

Made in Vermont using all-new, U.S.-made parts, these are truly American AK-47s. The Century Arms C39’s receiver starts as an 11-pound block of 4140 ordnance-grade steel that’s carefully CNC-machined to proper specifications. Out front the rifle uses a 16.5-inch, 1-in-10-inch-twist, chrome-lined barrel capped with a muzzle brake.

The rear sight is adjustable for elevation and windage. The internal parts are American-made, and while my earlier test model came equipped with a contoured pistol grip and TAPCO trigger unit, newer versions feature Century’s own RAK-1 trigger groups. My test model also came with laminate furniture, though Magpul stocks are available.

Two American-made, 30-round magazines rounded out the test package, making it completely U.S.-made and equipped. All in all, this is a solid rifle with a traditional feel. The fit and finish were excellent, especially when you consider the price. Most gun shops sell these rifles for around $750, which makes them just about as affordable as stamped-receiver AKs.

Now, while each C39v2 rifle comes with scope rails mounted on the right side of the receiver, my earlier Century Arms C39 variant did not. I also wanted to use an optic for this test, so I replaced the top portion of the rifle’s handguard with a gray ATI AK-47 Strikeforce unit with a rail on top. Made of polymer, this handguard is durable yet lightweight, and it blended in pretty well with the laminate furniture.

Using full-sized red-dot sights on an AK can be problematic. They sit so high that it’s harder to get a solid cheekweld while aiming. Smaller red dots work nicely, however, and Aimpoint’s Micro T-1 is one of the best out there. It’s small, lightweight and incredibly rugged, with a run time of over 50,000 hours. Mounted to the Strikeforce’s top rail without a riser, the sight sits low enough to allow for a normal cheekweld. 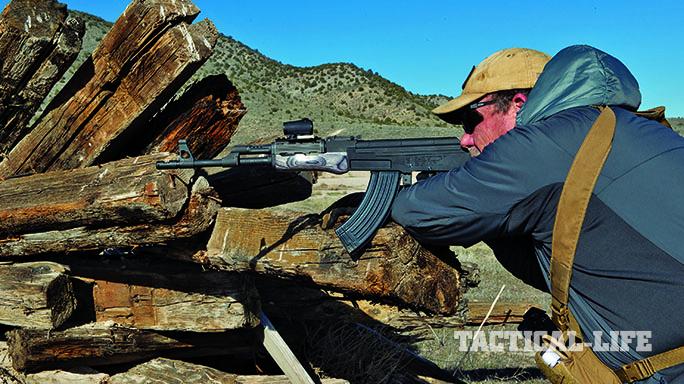 Reliability is the primary drive of any AK, so I ran this rifle hard in various conditions with a variety of ammunition, including non-corrosive, steel-cased, 123-grain Red Army Standard FMJs from Century Arms. And I’m happy to report that the Century Arms C39 ran flawlessly.

One of the strengths of the AK system is magazine availability. Built in several countries with dozens of variants, they are prolific and relatively cheap. Yet they’re anything but consistent in terms of construction. Stamped-receiver AKs typically accept most of the magazines out there, and it isn’t a big deal to tweak your rifle’s magazine well if needed. When it comes to machined receivers, however, things are a bit different, as you really don’t want to get too crazy bending things around. It’s not uncommon for these types of guns to have issues with various magazines. Thankfully, this rifle had no such issues. The C39 ran everything from Bulgarian polymer magazines—my favorite for hard use—to Polish steel magazines to polymer TAPCO and U.S. Palm magazines without a single problem.

When it comes to AR-platform rifles, ejection patterns are always important. A few degrees’ difference can indicate issues with extractors, buffers, bolt timing and more. But most of those issues don’t exist with AKs, which typically send casings a mile upward and into the next zip code. This rifle was no exception; it sent steel casings 15 feet into the air, and they landed forward and to my right about another 15 feet away. Along with the Red Army ammo, I tested DoubleTap, Hornady and Wolf rounds, and everything ran and ejected well. 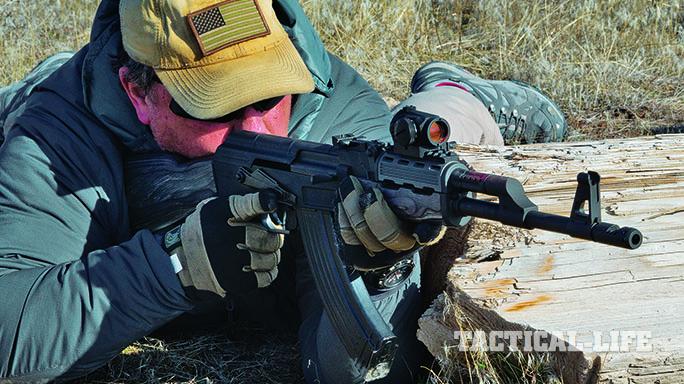 Along with controlled fire, I performed 30-round magazine dumps using the Red Army and Wolf Military Classic ammunition, and the C39 passed this test with flying colors. The TAPCO trigger was pretty fast, and I didn’t notice any rebounding. Dumping three consecutive magazines into a target at 15 yards, the C39 never missed a beat and placed everything into a 15-inch circle as fast as I could pull the trigger. In short, the Century Arms C39 is a reliable performer.

I wore gloves for all of the testing. During rapid-fire strings, the forend did get pretty hot. However, the laminate handguard did its job, and the ATI top cover did not melt, which had been one of my concerns initially. It held up well throughout the testing.

Now for the accuracy portion of the evaluation. As you know, the AK was never designed for producing tight groups, even from prone or bench-rested positions. However, with the C39, most of my groups averaged between 3 and 4 inches at 100 yards with steel-cased ammo. When I switched to brass-cased ammo, the results were even better. The best five-shot group came with DoubleTap’s 123-grain TSX load at 1.95 inches, and this is exceptional for an AK using an Aimpoint Micro T-1. I can only assume the results would get better with a magnified optic.

Over the years, I’ve always preferred AK-pattern rifles with stamped receivers. They are true fighting rifles with unparalleled reliability, solid operation and moderate accuracy. With just a few alterations, they can also be ergonomic, facilitating fast reloads. On the other hand, I always considered billet-crafted receivers to be costly without significantly enhancing the rifle’s capabilities enough to justify the higher price.

The Century Arms C39 series changes all that. These guns sell for about the same as models with quality stamped receivers, and they’re American made. They feel solid and a bit more substantial then stamped versions, too. If there is a downside, it’s that you need to be careful about accessorizing, as most things built for stamped receivers will not work on a billet-crafted gun without some sort of modification. Of course, that’s slowly changing, too, as more and more companies are building American-made parts and billet-crafted receivers.

In all, the Century Arms C39 I tested worked well, never malfunctioned and was pretty accurate for a basic AK rifle. The laminate stock set was nice, and the muzzle brake was very effective despite being loud. If you’re in need of an AK that’s 100-percent American made, make sure you check out Century Arms’ newer C39v2 rifles. I’m sure you won’t be disappointed.