by Nick Jacobellis
in Guns, Rifles
0

Have you ever been fascinated by a particular firearm but for various reasons you never had the opportunity to fire one, let alone own one? The rifle I am talking about is the FN FAL, a Cold War battle rifle that was selected by numerous allied nations when the United States adopted the M14. I can’t explain it, but ever since I read about the British Army occupying Northern Ireland and then fighting in the Falklands War, I have wanted to get in some trigger time with a FN FAL. After firing a few rounds through a friend’s FN FAL many years ago, I finally had the opportunity to conduct an actual field test of a FN FAL variant when I was asked to evaluate the Century Arms FAL G1 Sporter.

I spent lots of time at a local gun range that was owned by a former lieutenant from the local sheriff’s department, and one day I noticed a Belgian FN FAL leaning against the wall behind the owner’s chair.

I liked this FN FAL so much I offered to buy it on the spot. Unfortunately, the range owner explained that he had just sold it. At the time he had no idea that I always wanted one of these rifles. When the new FAL owner arrived and learned how much I always wanted to buy or at least field test a FN FAL, he let me fire a few rounds from his newly acquired rifle on the 100-yard range. Needless to say, I savored every moment of this quickly executed field test. 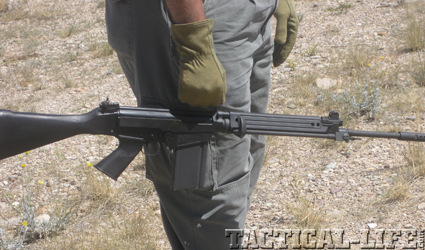 The day that I decided to sight in the G1, I figured it would not hurt if I had a technical adviser on hand who was familiar with the FN FAL. The person I selected to assist me was my shooting buddy, Rick Batory, a contract firearms and tactics instructor for a local U.S. Air Force PJ unit. My other shooting buddy, Larry Kotz, an SOT dealer who supplies Class III firearms to military and LE personnel, also came along to test the gun.

The first order of business was to inspect the G1 and lubricate this rifle before I inserted a 20-round steel “metric” FN FAL magazine with five rounds of ammunition into the rifle. With plenty of knowledgeable technical advisers by my side, I started to sight in the G1 by using a variety of Lithuanian 147-grain Mil-Spec ammunition, German NATO specification 147-grain Patrone ammunition and Winchester 147-grain 7.62mm FMJ ammunition to see how the rifle printed, while being used to engage a 2-inch jet black Shoot ‘N See target that was taped to a man-size TQ19 Police Firearms Qualification Target 50 yards away from our shooting platform.

For some reason the G1 test rifle did not function reliably with German surplus NATO ammunition. This meant that I sighted the G1 in using mostly Lithuanian, Winchester and even some of Richard Batory’s reloaded ammunition, which all fed and extracted reliably in the test rifle. However, it should be noted that if I had more 147-grain German FMJ ammunition with me and I had more time to do so, I could have tried to manually adjust the gas regulator one click at a time to see if I could get the G1 copy of the FN FAL to work with the German Patrone ammunition. I say this because the G1 is manufactured with a gas regulator that enables the operator to manually adjust the operating system of any FN FAL copy by hand so it can reliably work with different bullet weights. Bear in mind that even though the gas regulator does not require a tool to make adjustments, I do recommend wearing gloves when you make adjustments on any rifle that is hot from excessive use. 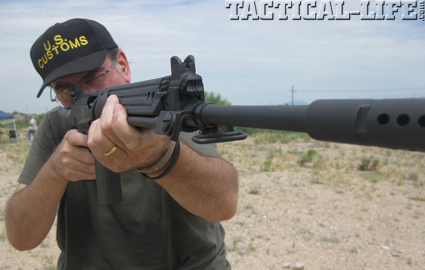 The G1 shot to the left of center with decent elevation and required numerous adjustments to move the sights into the proper position so that I was eventually able to hit the 2-inch Shoot ‘N See target with enough rounds to confirm that the G1 was properly sighted in.

Part Two of the first range session involved advancing to the 25-yard line for some snap shooting and ready-up drills, where I held the G1 at the ready position with a full magazine, a round in the chamber and the safety off. On command, I quickly raised the G1 and fired one round the split second that the front sight was lined up on the upper chest area of a TQ19 Police Firearms Qualification Target. As the test target reveals, I was able to keep my rounds on target each and every time I fired. The really fun part of this exercise came when I conducted fast-fire drills and I fired multiple strings of bullets in a true CQB-style session of engaging a man-size target. 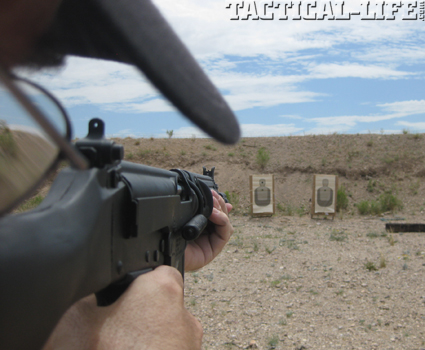 The three problems that I have with the G1 is that the test rifle did not reliably feed German Patrone surplus ammunition, I went through several magazines before I found the most reliable ammunition, and the fact that the rear sight is positioned too far back on the top of the receiver for me and other shooters to use a “normal’ cheekweld on the stock to comfortably operate this rifle. However, it did not take that many rounds for me to find my comfort zone by repositioning my checkweld further back on the stock.

The bottom line is that despite the obvious differences between more modern rifles and a Cold War design, the G1 is perfectly capable of being used for personal protection and home defense as well as for recreational shooting with certain limitations.

During the 100-yard accuracy test portion of this evaluation, I fired the Century Arms G1 using a BlackHawk messenger bag filled with 7.62mm ammunition as a rifle rest. While using iron sights on the G1 rifle, I delivered a group that measured 9 inches by 4 inches using Winchester white box 7.62mm FMJ ammunition. Four of the five Winchester rounds hit the target but were just off the circular bullseye target, with one round just missing the right shoulder. This translates to four hits in the upper right shoulder area of a man-size target with one round just missing the paper. Not bad for a gun that is based on a 59-year-old design. 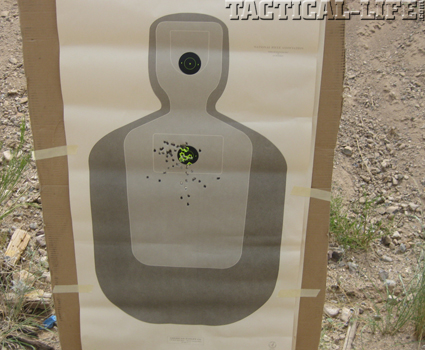 When I fired the 147-grain Lithuanian FMJ ammunition, I delivered a group that measured 5 inches by 3 inches. In the lower righthand bullseye target, I put one round of M118 7.62mm NATO Lake City FMJ ball ammunition in the two ring, one in the five ring and the remaining three rounds were low and to the left off the target. The second best group next to the Lithuanian 147-grain FMJ ammunition was fired with the Federal Premium 168-grain Sierra Match King BTHP ammunition. Even though this group missed the bullseye-style target, it delivered a group off to the left that registered excellent hits in the lower chest and upper stomach area of the human target in almost a straight line that ran from north to south and measured 4 inches by 0.5 inches.

When you compare the G1, with a retail price of $997, to the other semi-automatic 7.62mm NATO-caliber rifles that cost anywhere from approximately $1,500 to $3,000 dollars, the G1 is actually a decent deal for the money. I say this because once you find magazines and different brands of ammunition that reliably work with this rifle, the G1 is reliable, easy to operate, relatively easy to wield and capable of delivering accurate shot placement at 25, 50 and 100 yards. Clearly, the G1 copy of the FN FAL is a suitable rifle to use for personal and home defense when you do not wish to spend a small fortune buying a more expensive semi-automatic military-style rifle chambered in 7.62mm NATO caliber. This is one reason why I have a Century Arms G1 FAL Sporter in my gun safe. Get one for your own safe at centuryarms.com or call 800-527-1252.