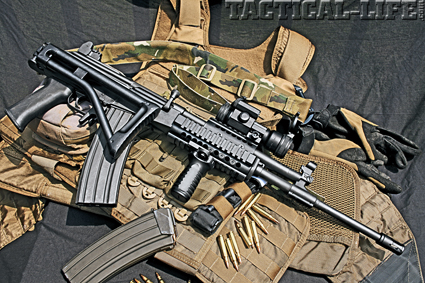 Thanks to the upswing in sales over the last couple of years, the majority of American gun owners equate the .223 cartridge with the myriad Stoner-based rifles now available. Nonetheless, the AR is not the only .223 game in town. A number of manufacturers are building self-loading rifles chambering the .223 and 5.56mm NATO cartridge.
No, the .223 and 5.56x45mm are not identical. The rule is that .223 will work in 5.56mm guns but not vice versa. Think of it like .38 Special and .357 Mag. The 5.56x45mm is akin to a magnum version of the .223.

Gun Details
Chambered in the 5.56mm, the gas-operated Golani battle rifle has an 18-inch barrel with a 1-in-9-inch twist. A “birdcage” muzzle brake/compensator is found on the business end. Like the original Galil rifle, the Century model has a skeletonized folding stock and distinctive polymer forend and pistol grip.

The finish on the rifle is completely in black (parkerized) and each gun comes with two, 35-round magazines and one 5-round “sporting” magazine. Empty weight is 8.13 pounds. Overall length is just a bit more than 38 inches. With the stock folded the rifle’s storage length is 29 inches. 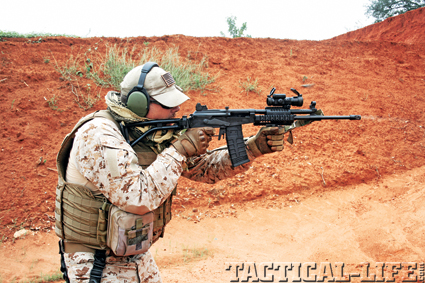 Sling mounts are found on the left side. The manual safety lever is ambidextrous. On the right side of the frame it operates like a standard AK. On the left side the safety is a lever—forward for safe, back to fire. This particular version of the rifle does not include a bayonet lug, as older models did. 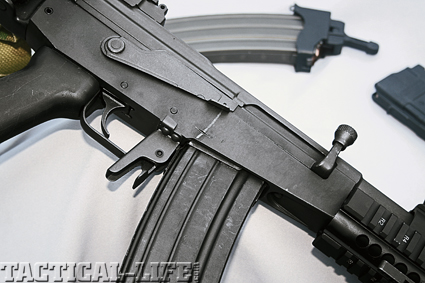 The charging handle on the left side, attached to the bolt and reciprocates with it. Note that the manual safety and mag release is ambidextrous.

The magazine release catch operates again like an AK, but has a guard to prevent accidental engagement if that should be a concern. This guard, however, prevents rapid one-hand reloading where the shooter uses a fresh magazine to unseat the empty one. AK operators know this technique well. To install a magazine, first hook the forward lip of the magazine and rock it back in place like the AK. As it is found in the center, the magazine release is ambidextrous.

The charging handle is attached to the bolt and reciprocates with it. Rather than protruding out of the right side, the handle points upward and can be operated with the with the supporting hand reaching over the top of the receiver. 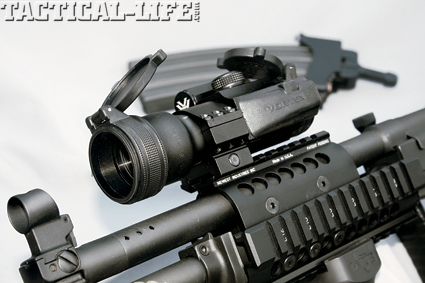 Sights
The sights on the Golani Sporter mimic those of the original Galil rifle with one major exception. The military rifles had tritium night-sights on the front and rear. Due to import restrictions, these “radioactive” sights are left off of the current model. As far as the standard iron sights are concerned, they are fully adjustable. The rear sight is a peep with dual apertures. The front sight post is protected by a circular steel guard.

Though the iron sights are fully functional, the rear peep aperture is small and the front sight post is difficult to pick up during rapid target engagement. I wanted to mount some type of red dot optic on the rifle, but in its standard configuration that would be impossible. Despite this obstacle, I soon had the solution to the mounting problem.

Midwest Industries has a four-way aluminum rail system designed specially for the Golani. Unfortunately I found out too late about it, but I did install their universal AK handguard on the rifle. Both of these Midwest Industries rails completely replaces the standard plastic forearm.

With the rail secured in place, I decided to mount a new Vortex “StrikeFire” red dot optic on the rifle. A single scope ring mounted easily to the top rail. Underneath, on the bottom rail I installed a vertical foregrip for better control.

Range Needs
In addition to firearms, Century International Arms also sells ammunition. Along with the Golani rifle, I acquired some .223 ammunition from Barnaul, a Russian Manufacturer. The Barnaul loads were a 62-grain JHP with zinc cases and a 55-grain JSP with lacquered steel cases. Also along for the ride were Federal’s American Eagle 55-grain FMJ and Wolf’s “Military Classic” 55-grain FMJ. 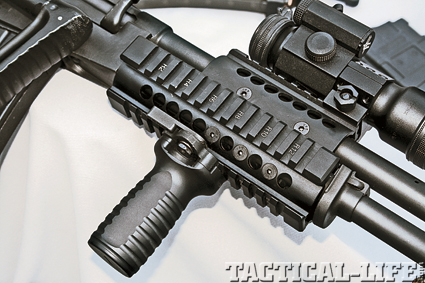 Midwest Industries 4-Way rail system for the Golani should fit perfectly on it and allow operators the option to mount various accessories.

As I put pen to paper, Century has spare/extra Golani magazines in stock for more than reasonable prices. I looked online and found steel Galil magazines could be found from $35 up to $75 a piece. TAPCO recently introduced a polymer 30-round magazine for the Galil. I found these online for less than $15 everywhere I looked. In addition to steel and polymer magazines, I would take a LULA tool to the range with me. The LULA tool saves your thumbs and lets you easily load your magazines to capacity. The AK LULA works with AK-47, AK-74, and Galil/Golani magazines.

No battle rifle would be complete without a sling of some sort. For this review I decided to attach a Vickers sling from available from Blue Force Gear. This is a two-point adjustable sling with padding in the shoulder area. The Vicker sling is strong/tough and has the added benefit of being adjustable with one hand. Yes, you can snug it up or loosen it with your support hand only. 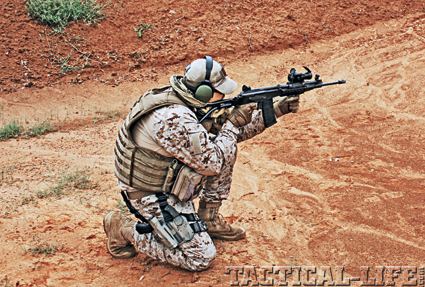 As per usual, I knocked out my chronographing chores first. Next I would bench the rifle and fire a few shot groups for record. The Golani is not a bench rifle, it’s a fighting gun and as such the majority of my range testing would take the form of shoot and move drills and training. The red dot Vortex optic provided a clear reference point for rapid target engagement. This was particularly apparent during moving drills.

During three separate outings with the Golani, I consumed somewhere in the neighborhood of five hundred rounds, the majority of which were the Barnaul and Wolf ammunition. Unlike many U.S. made AR’s, the Century rifle had no problem with the zinc and lacquer steel cases. It consumed round after round and cycled the ammunition consistently even when the barrel and chamber were smoking hot.

Final Notes
The Golani Sporter proved a tough, reliable rifle. The gun is most definitely classified as a “rifle” not a “carbine.” The 18-inch barrel and 38-inch length along with the more than eight-pound empty weight give the Golani the feel of a full-sized rifle.

For more information, contact Century International Arms at 800-527-1252, or visit them on the web at Centuryarms.com. 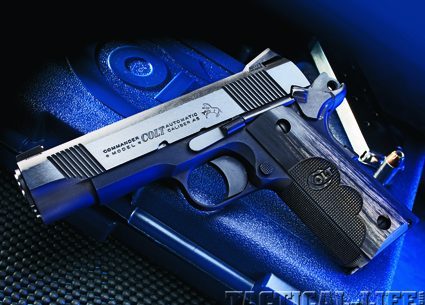