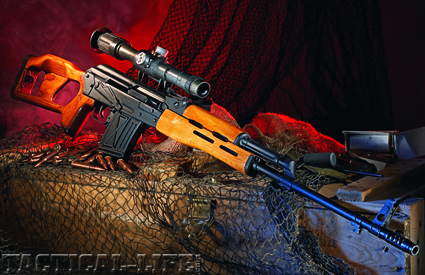 The Romanian PSL-54C in 7.62x54R is a semi-auto precision rifle based off of the tried-and-true Kalashnikov design.

The Kalashnikov-pattern rifles is many things — rugged, reliable, and brutally efficient. Produced in mind-blowing numbers around the world during the Cold War era and continuing on through today, the Kalashnikov AK is king of the wars in almost all of the hotspots in the world today. Nevertheless, there is one thing that it most-definitely is not — accurate.

In situations where greater range, accuracy and power than a traditional AK is needed, the answer comes in a Romanian-made semi-automatic precision rifle dubbed the PSL. Chambered in the more powerful 7.62x54R rimmed cartridge, the PSL series provides greater long-range capabilities than the AK and is seeing action on both sides of the current War on Terror. And, for US enthusiasts of the design, a civilian-legal variant called the PSL-54C is available for sale through Century International Arms.

Despite its widespread use around the world, the Romanian PSL series of rifles suffer from a serious case of mistaken identity. Due to generally similar exterior lines and similar roles, this rifle is often confused with the SVD rifle and many times incorrectly referred to as a Romanian “Dragunov.” In reality, the two rifles could not be more different.

Officially dubbed the Samozaryadnaya snaiperskaya vintovka Dragunova (or SVD for short), the SVD is a 7.62x54R-chambered semi-automatic rifle, adopted by the Soviet Army in 1963, that offers a greater rate of fire through its detachable box 10-round magazine than earlier World War II-era Soviet M91/30 bolt-action sniper rifles, but with better accuracy and range than an AK.

The SVD has uniquely Eastern lines that are generally reminiscent of a Kalashnikov-pattern rifle. However, it is internally quite different from the infamous AK. In particular, the SVD’s short stroke piston system results in a lighter bolt carrier than in the Kalashnikov rifle, which features a large and heavy gas piston/bolt carrier assembly. To further enhance accuracy, the SVD’s forend is affixed directly to the receiver for less barrel disturbance—also at odds with the Kalashnikov design. 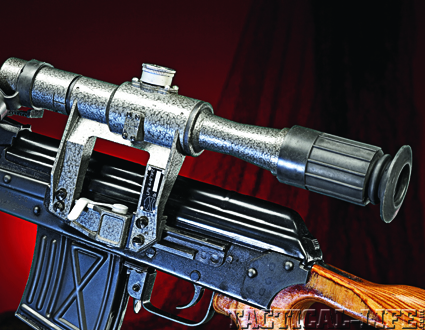 Due to the design of the top cover, the PSL-54C features an optics rail on the left side of the stamped steel receiver that accepts the included 4x24mm scope. The 7.62x54R rifle feeds from a 10-round detachable mag.

With the SVD adopted as the standard marksman rifle of the Soviet Union, what exactly is the Romanian PSL rifle and why does it exist? Rather than simply adopting is own variant of the SVD rifle, the Soviet-era satellite state of Romania decided to develop its own precision rifle through its well-developed and highly capable domestic arms production facilities. In particular, the PSL (which stands for Pusca Semiautomat cu Luneta or “semi-automatic rifle with scope”), is a variant produced by the Romanian arms manufacturer SC Fabrica de Arme Cugir SA (or “Technical Products Factory Cugir”), a facility with a two century-old tradition in armsmaking.

Introduced into Romanian armed forces in the late 1970s/early 1980s, the PSL differed significantly from the SVD, despite their similar external appearances and shared 7.62x54R chambering. First and foremost, unlike the SVD, the PSL’s basic design is based off of the tried-and-true Kalashnikov rifle, although significantly enlarged and reinforced to accommodate the larger, more powerful 7.62x54R cartridge.

As a result, the PSL represented a polar-opposite design approach from the SVD. The heart of the PSL is an elongated and reinforced stamped-steel Kalashnikov-style receiver. To handle the increased impulse stress of the full power rimmed 7.62x54R cartridge (which produces performance similar to the .30-06 Springfield cartridge) over the Kalashnikov’s standard 7.62x39mm intermediate cartridge, the PSL’s 11-inch receiver features several reinforcement points over a standard sheet metal Kalashnikov-style receiver. 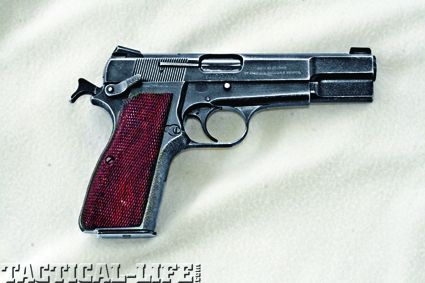 The Romanian PSL-54C in 7.62x54R is a semi-auto precision rifle based off of the…