0
SHARES
35
VIEWS
Share on FacebookShare on Twitter
The Draco pistol in 7.62x39mm provides U.S. shooters with an opportunity to own a firearm inspired by the ubiquitous AKS-74U Kalashnikov PDW. It combines rifle-cartridge power within an ultra-compact package.

The submachine gun has a long and storied history. Beginning in the trenches of World War I with the revolutionary German MP18 to the famed Thompson “Tommygun” of World War II to the high-tech MP5 seen in the hands of SpecOps forces around the world today, the “subgun” has played a pivotal part in practically all combat the world has seen for the last 100 years. 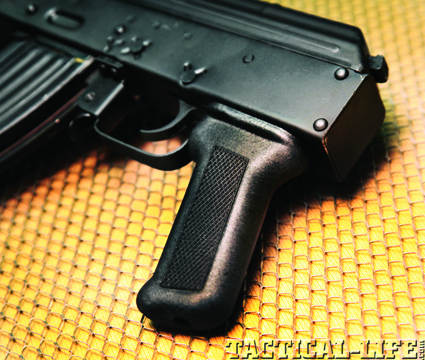 Note the lack of a stock or the means of attaching one, as well as the AKM-style black synthetic pistol grip.

However, the submachine gun is just as rife with weaknesses as it is with strengths. Foremost is its chambering. By the nature of the design, submachine guns are chambered for pistol cartridges, more often than not either 9×18, 9x19mm or .45 Auto (although there are chamberings that range from the .32 ACP to the 7.62x25mm). While these pistol cartridges make such firearms easier to control under fully automatic fire, it also makes their range and penetrative power quite limited when compared with a rifle. 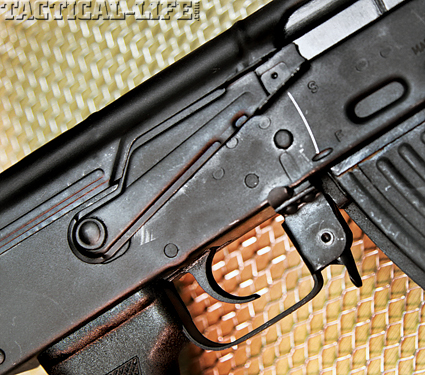 Note the dustcover/safety lever behind the charging handle and the paddle-style magazine release forward of the triggerguard.

In fact, this very weakness was the motivation behind the development of the “assault rifle,” first widely issued as the German StG44 Sturmgewehr. Combining the magazine capacity and rate of fire of a submachine gun with the relative range and power of a rifle, this 7.92x33mm-chambered rifle revolutionized military small arms design. And, by combining compactness and ease of handling with voluminous power, set the stage for a move away from the submachine gun and the eventual rise of the PDW in military circles.