WASHINGTON– The strategy in the greater Middle East “is not about how many enemy we kill, but about how many civilians we protect,” the chairman of the Joint Chiefs of Staff said here today.

Navy Adm. Mike Mullen made the observation during a talk at the Center for Strategic and International Studies.

Dialogue and building partnerships across the greater Middle East is the U.S. strategy in the region, Mullen said, citing Iran as a particular challenge in the region. The United States and international community should engage in dialogue with Tehran, the chairman said.

“On the security side, I am very concerned with [Iran’s] development of nuclear weapons, their funding and sponsoring of terrorism and focusing that support of Hezbollah and Hamas, and being a destabilizing influence in the region,” he said.

The chairman said he believes Iranian possession of nuclear weapons would spur an arms race in the greater Middle East, just as India acquiring nuclear weapons spurred an arms race on the subcontinent. If Iran develops a deliverable nuclear weapon – and the country is building longer-range missiles – then neighboring countries would feel the need to develop their own nuclear arsenals, he explained.

“I don’t see a lot of space between where Iran is headed and then potentially what might happen,” the admiral said. “There is a great deal that depends on the dialogue and engagement, and I think we ought to do that with all options remaining on the table, including, certainly, the military options.”

Terrorists conceivably could get nuclear weapons, and with no “return address” deliver one without fear of mutually assured destruction, Mullen said. “I know al-Qaida still seeks that,” he added. “I think our broad-term engagement across the Middle East … is to create partnerships and dialogue and understanding.”

All nations must realize the danger of this proliferation and do everything in their power to ensure it does not happen, he said.

Mullen noted that when he took over as chairman in October 2007, the priority was Iraq. U.S. casualty lists were mounting, and while the “surge” that ultimately improved security had taken place, its full effect had not yet been felt.

Last week was a big week in Iraq, Mullen noted, with the last U.S. combat troops leaving the cities and towns. These troops are now posted outside the cities, on call if their Iraqi allies need them. While some large attacks have taken place, June had the lowest number of attacks since the war began, the chairman said.

Major elections are planned in Iraq at the beginning of next year, and U.S. troops levels will stay at about 130,000 through those elections. After that, commanders expect the force level to drop in the spring to around 35,000 to 50,000, with all U.S. troops coming out of Iraq by the end of 2011, Mullen said.

Iraq poses many political challenges, Mullen acknowledged, but he said he’s encouraged by Vice President Joe Biden’s visit to Iraq in recent days and the U.S. commitment it represents.

But because Iraq cannot be viewed alone, the chairman said, he has started working on strategic issues pertaining to the broader Middle East. He called that region the most volatile area of the world and said all nations must cooperate to solve its problems. “We must do this across the full spectrum of national and international power,” he said.

The main military effort has now shifted to Afghanistan, but also includes Pakistan in any strategic appraisal, Mullen said. Still, he added, the challenges are more than simply Iraq and Afghanistan. From Beirut to Tehran and Islamabad to Gaza, he said, the United States must forge ties with governments and with people.

The United States must “understand how we proceed in the future and how we engage and address the countries that are involved in this,” Mullen said.

The chairman said the situation in the region is urgent, but that does not mean the United States can forgo a long-term approach to its relations around the greater Middle East.

“There needs to be a long-term view and an element of patience that recognizes you are not going to solve these things overnight,” he said. “Any solution is going to take constant engagement, constant pressure and a comprehensive approach across all aspects of what we do.”

In Afghanistan, the new U.S. leaders – Ambassador Karl Eikenberry and Army Gen. Stanley A. McChrystal, who recently took command of NATO and U.S. forces in Afghanistan – are working to understand the situation, Mullen said. Additional American troops in the south and east have brought the fight to the enemy. The United States lost seven soldiers in combat in Afghanistan yesterday, and the fight is going to get tougher, he said.

Instilling security, separating terrorists and extremists from the Afghan people, and protecting them from the ravages of war is the counterinsurgency strategy, the chairman said. “But it is just beginning, and we don’t know how this will go,” he said. “I’m comfortable that strategically we know how to do this.”

The effort in Afghanistan is fully resourced, the chairman said. The effort will create the security needed to hold the Taliban out of cleared areas, he said, and will allow the economy and governance portion of the effort to take hold and succeed. The coalition also is working to train Afghan security forces rapidly so they can assume the responsibility for defense of their own country.

The greater Middle East is a vital area to American and international interests, Mullen said. “Responsible leadership throughout the world must generate peaceful outcomes and not ones that generate more conflict with so many challenges in that part of the world,” he added. 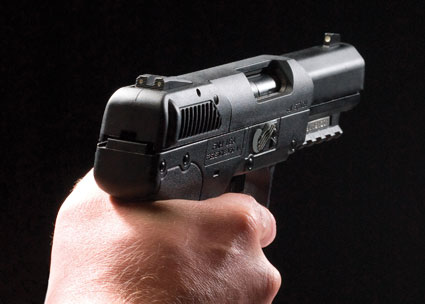