Have you ever bought a new gun and had someone ask “what are you going to use that for?” As though every gun needs to have a purpose, whether it’s hunting, personal protection, or competition. That’s a terrible question, because some guns have no purpose, but it’s a wonderful thing that they exist. The Chiappa Rhino 60DS 9mm, aka the Charging Rhino, is such a gun. 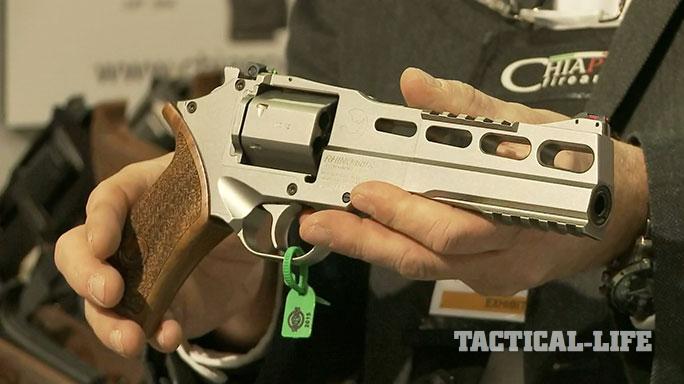 The Chiappa Rhino 60DS Stands out in a Crowd

If you’re not familiar with the Chiappa Rhino family of guns, they’re an Italian designed and manufactured revolver that unlike every other revolver on the planet, has the barrel index at the bottom of the cylinder. Their appearance is fantastic, likely because they were designed by the same person who designed the Mateba Autorevolver. Because they look wild, the Rhino family of guns are popular movie and TV guns. The Chiappa Rhino 60DS is no exception to these distinct looks. A matte black frame is offset by a stainless steel cylinder and trigger, and “Charging Rhino” is lasered into the barrel on the right side. It’s a sight to behold.

You can’t have an article about any of the Rhino series of guns without talking about the barrel. In theory, because the barrel axis is lower, and is more in line with the hand, wrist, and arm, it reduces recoil felt by the shooter. This, combined with the grip shape also allegedly gives a more natural point of aim.

What is the Charging Rhino For?

The reason why the Charging Rhino doesn’t have a purpose is because it’s…well it’s weird. Wonderful, but weird. It’s a 9mm revolver with a six-inch barrel, it requires moonclips to function, but it’s also only a six shot gun. It’s unmistakably a competition gun, because from the factory Chiappa installs their Stage 3 trigger in the Rhino 60DS 9mm and builds it to be double action only.

This has two results: the good result is that the trigger pull is less than 6.5 pounds, and is probably the best factory revolver trigger. The bad result is per Chiappa’s website, the Charging Rhino should only be used with soft primers. That was confirmed during testing, when the Charging Rhino had light strikes with Hornady and S&B primers, but lit off every Federal round that went under the firing pin.

Back to trying to figure out what this gun is for, though. As mentioned, it’s clearly a competition gun, but it’s not actually good for any of the shooting sports in America. The barrel is too long for International Defensive Pistol Association (IDPA) rules. It’s only a six shot which means it isn’t competitive against the 8-shot revolvers in the United States Practical Shooting Association (USPSA). You could use it in Steel Challenge, but again all the revolvers in Steel Challenge are 8-shooters.

You Could Use the Charging Rhino in ICORE

The only action shooting sport where it makes sense is in the International Confederation of Revolver Enthusiast’s (ICORE) Limited-6 division. Limited-6 allows six inch barrels, it allows moonclips, and the power factor is low enough that 9mm can make it. But the catch is that very few people actually shoot Limited-6, so building a gun just for that division doesn’t make sense. Additionally, finding a Chiappa Rhino 60DS holster proved to be tough. Eventually we tracked one down from Ghost holsters, but it was pretty expensive.

And that’s okay, because the Charging Rhino 9mm doesn’t need to make sense. It has an accessory rail on the barrel that’s so far forward you can’t actually reach anything on it. It has a rail on the top to mount an optic, but the rail slightly too short for a Holosun factory mount. None of it makes sense, and that’s actually what makes this gun wonderful. It doesn’t have to be for anything, it just has to fully embrace its own madness, and that it absolutely does.

But Can the Chiappa Rhino 60DS Shoot?

Of course, all of this bonkers styling and design touches would be so much lipstick on a pig if the Chiappa Rhino 60DS couldn’t shoot. Good news then: it shoots great. During testing the Charging Rhino went through 8 different types of ammo, 5 different bullet weights, and a total of 254 rounds. The only issues were the previously mentioned light primer strikes, which aren’t a big deal. It’s not like this is a carry gun, it’s a range toy and a fun one at that. One great trait of the Charging Rhino is how accurate it is. Shooting 124 grain Sig V-Crown jacketed hollow points, it turned in a best group of 0.73 inches, and a group average of 1.07 inches for five groups.

Shooting from a rest at 25 yards, the worst average groups came from Federals 150 grain Syntech Action Pistol load. The average group size was 2.63 inches, which for a “worst” group is pretty spectacular. Other rounds tested include: Hornady 115 grain Critical Defense, Sellier & Bellot 150 grain FMJ, 124 and 147 Federal HST, 147 grain Federal American Eagle, and 115 grain Syntech. Other than the 2.63 average group already mentioned, no ammo turned in an average group larger than 2.5 inches. Both of the HST rounds, Federal’s premium defensive load, shot sub 2-inch average groups. The Charging Rhino might be partial to 124 grain bullets. The best group from the 124 grain HST was an awesome 0.98 inches.

Shooting the gun fast also wasn’t a problem, either. One of the things a revolver trigger needs to be “fast” is a positive reset. The greatest revolver shooter of all time, Jerry Miculek, puts heavier than factory reset springs in his wheelguns so that the trigger would reset even faster, allowing him to shoot the fastest shots possible. I’m no Jerry, but I was able to push the Rhino down to 0.22 seconds between shots. On the classic shooting drill, the Bill Drill, I was able to fire 6 shots in 1.75 seconds and get all six hits on a steel target at 10 yards. The low barrel position in relation to the shooter’s hand, wrist, and arm really did seem to reduce the amount of recoil felt.

Making a gun easy to shoot requires a combination of factors. Weight helps manage recoil, and the Charging Rhino is not light at 2+ pounds. The great trigger helps and the unique barrel position helps. Lastly, the last piece of the shootability puzzle is the sights, which are also great. The Charging Rhino features fiber optic sights both front and rear. The red fiber up front is contrasted with two green fiber optics in the rear, giving the gun a high contrast sighting system that’s easy to align.

Shooting 9mm out of the Chiappa Rhino 60DS is Fun

Shooting 9mm rounds out of a six inch revolver is already a pleasant shooting experience. Plus, the unique design of the Rhino makes it even more so. The barrel alignment also gives the shooter a mechanical advantage when controlling muzzle rise. This helps with fast follow up shots. Which, thanks to the previously mentioned trigger, you’re going to want to do a lot of. The only drawback to the Rhino’s barrel alignment is that if you use a thumbs-forward grip you’re going to have a bad time.

If you want a 9mm revolver to shoot matches with, buy a Super GP100. If you want one to shoot a little at the range, get a Charter Arms Pitbull in 9mm. But in these days of “you should be training for self defense” or “you should always take your shooting seriously,” sometimes it’s nice to get out to the range for no other reason than to have a laugh.