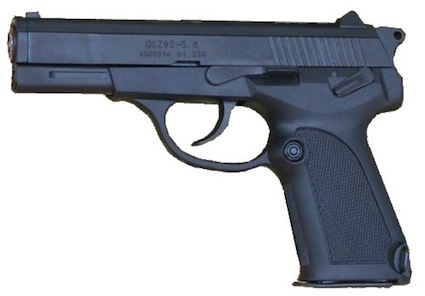 China has introduced a new version of its standard 9mm military pistol (the Type 92). The new version has a polymer body, a longer (by 8.5 percent) barrel, a Picatinny accessory rail and several minor changes, apparently the result of user feedback. The original Type 92 was a 1.7 pound (790 gram) weapon with a 4.33 inch (111mm) barrel. The 15 round magazines had quality control issues and the 14.5 pound double-action trigger pull was not popular either.

The Type 92 is slowly replacing the Type 54, which is a Chinese copy of the 890 gram Russian World War II era T-33. This weapon uses the 7.62x25mm cartridge, and the Russians stopped making them in 1954, three years after China began producing it. The Chinese still produce the Type 54, but in a version chambered for the 9x19mm Parabellum, which is a world standard for pistols.

The Type 92 is also available in a version chambered for the Chinese 5.8x27mm cartridge, for which a 20 round box magazine is available. Both the Type 54 and Type 92 are exported for military, police and civilian use. The Type 54 is very popular with Chinese gangsters. Chinese pistols are not noted for their slick design, but rather for their low price.

U.S. makes it easier for veterans to claim PTSD.