If you stand still, all you’re going to do is collect dust. When it comes to the original direct gas impingement AR rifle design, there has certainly not been any dust collecting, as this rifle began seeing changes and improvements from day one. However, the days when we were all over the change from left and right triangle handguards to universal round ones are long gone.

Today, the AR rifle is evolving at an exponential pace with all manner of innovations and ideas taking hold, resulting in an entirely new rifle family tree. The huge civilian interest in this rifle is largely to thank. In fact, ARs are the most common rifle I see at my range. Of course, not every mutation is going to bear fruit, but once in a while you get real revolutionary change. The switch to the piston-operated AR from direct gas impingement is one, and Christensen Arms’ use of carbon fiber could well be the next. 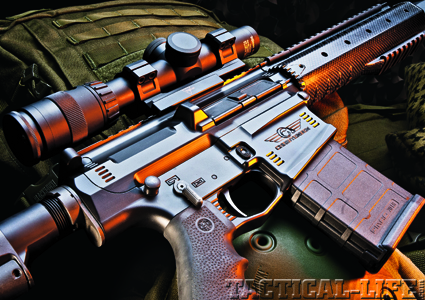 Christensen Arms’ logo is etched on the receiver.

Christensen Arms’ CA-10 Recon is a semi-automatic direct gas impingement AR available in a variety of configurations as well as calibers. The 7.62mm round in law enforcement is mostly limited to sharpshooting use. For entry teams using short-barreled firearms, this round would be considered overkill, and even with a barricaded suspect, many would prefer a shotgun with slugs. The Christensen Arms CA-10, however, can certainly fit the sharpshooter role, offering both accuracy and faster follow-up shots.