by John Fasano
in Guns, Handguns
0

6
SHARES
610
VIEWS
Share on FacebookShare on Twitter
“Available in black powder or smokeless frame, from loading gate to muzzle, the Turnbull-finished Cimarron is a thing of beauty.”

I love single action army (SAA) revolvers. As a Colt collector and one of the associate producers of the 1993’s film Tombstone, I like nothing more than the feel of that plough-handled pistol in my mitt. In fact, I’m writing this article with a SA strapped around my rather prodigious waist. But it’s not a real Colt SAA. It’s one of the great 1873 replicas sold by the good folks at Cimarron.

“Texas Jack” Mike and Mary Lou Harvey founded Cimarron in 1984 to import and sell reproductions of the great black powder and cartridge handguns and long guns of the American West. Cowboy Action Shooting (CAS) was still a few years off and Mike had no idea of the explosion in demand for period firearms that was coming. CAS shooters would need guns and period Colts would be out of the reach of most competitors. Many would turn to the excellent Italian-made SA sold by Cimarron.

The Cimarron Model “P,” like many of the Italian-made revolvers based on the original SA Colts available in US gun stores, comes from the A. Uberti factory in the mountains of Gardonne, Italy, the “Valley of the Guns,” which is also the home to Beretta. Offered in .45LC, .45ACP, .45Schofield, .44WCF, .44Spl, .357Mag, .38WCF and .32WCF, the Uberti-made 1873 SA is a great replication of the original, offered with both a screw black-powder or crossbolt Pre-war frame options. As sold by Cimarron these guns’ actions are smooth and correctly timed. 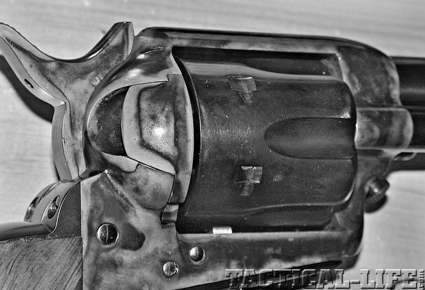 While these Italian SAAs have been proven to be well-balanced, rugged performers on the range and in CAS competition, they’ve always had one shortcoming to me when comparing them to my actual Colts: the finish. The standard Uberti SAA bears a good blue job on the barrel and cylinder but a muted gray “case colored” frame that looks like a workman with dirty hands touched them up before they were shipped out of the factory. A look at these crudely colored frames and an Italian revolver was immediately recognizable as a “fake Colt.”

Mike and Mary Lou decided to make their Uberti-made guns stand out from the others being imported. They wanted to transform them from just shooters to “Investment Quality firearms” and so decided to offer their customers a wide assortment of finish options and upgrades.

Aside from a high polish modern blue they offer SAAs in stainless steel, an old-style charcoal blue, and nickel, their “Original” grey steel finish that makes your gun look like it’s had the finish worn off over a hundred years of use. The final finish option is the one highlighted here, one of the most attractive and period accurate out there. The guns come into the country in the white and are finished and assembled here in America with bone color casehardened frames and hammers by Doug Turnbull Restorations.

The boys at Doug Turnbull’s workshop have been working overtime applying the origional “period correct” metal finishes to handguns and long guns for many of the manufacturers in America including the SAAs of US Firearms in Hartford, EMF’s Great Western II SAAs and the long guns of Dakota Arms. What makes the Turnbull finish so sought after? It’s their process of gun finishing. What was once commonplace but has been mostly abandoned because of cost has seen a comeback of sorts. 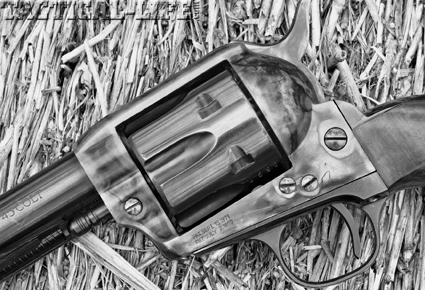 Turnbull replaces the washed out finish of the Italian single action with vibrant, period accurate colors.

The gun parts are heated to a specific temperature for a period of time while it is packed tightly in a mixture of “carbonizing material” including bits of actual bone. When the part cools, the surface of the metal has been impregnated with a thin layer of colored carbon. It is only this real bone casehardening of metal parts that gives the rainbow of swirling colors seen on the Cimarrons on these pages. Turnbull understands how to mix these elements to duplicate the different color ranges of different-era firearms.

A call to Cimarron at their Texas factory secured me three Turnbull USA finished SAAs for Cimarron for this test where each of the SAA’s original barrel lengths: 4.75-, 5.5- and 7.5-inch Cavalry Model. Opening the boxes, I was able to make a one to one comparison of the USA finish and the standard Italian SA. The frames of the stock Uberti SAAs were muted dull, making it appear mottled gray from a distance. The Cimarrons nearly jumped out of their boxes.

As the owner of a once quite admirable collection of first-generation SAA Colts, I can attest that these USA-finished Cimarron SAAs rival the vibrant-colored frames of the originals. After photographing the guns, the 7.5-inch Colt was shipped to the East Coast, where my oldest gun buddy and CAS competitor Fred Capobianco would wring out the Cimarron SAA and a handsome new holster from Alfonso’s of Hollywood.

When the day came to shoot the Cimarron I suited up in my favorite Western hero outfit, and proudly strapped on my beautiful Gunsmoke-style gun belt from Alfonso’s of Hollywood. Alfonso’s, also known as Alfonso’s Gunleather, is owned by Omar Pineda, son of the Alfonso Pineda who built some of the most famous TV and movie holsters designed by Arvo Ojala. 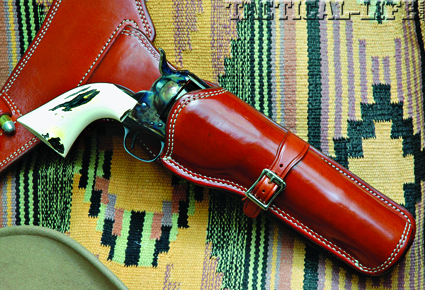 Omar has continued his father’s tradition-crafted steel-lined fast-draw holsters as well as exquisite recreations of the movies and TV stars’ rigs, including the Matt Dillon seen here as well as Have Gun Will Travel Paladin holster. Omar’s A4 “James Arness Rig” is available for Colt or Colt clones in 5.5-, 7.5- and 10.5-inch buntline. It’s also available for the old, large-frame Ruger Vaquero and the Ruger Vaquero Bisley.

My new Arness rig is a knockout. Omar explained that this is their most sought Hollywood western holster. James Arness, who played the role of Marshal Dillon, popularized this rig in the longest-running western series Gunsmoke. “We upgraded our original drop loop, steel-lined holster with double stitch and 18 gauge steel.” When John told me a Doug Turnbull case-colored Cimarron was on its way to me, I knew I wanted a Gunsmoke to carry my 7.5-inch gun, so I called Omar and discussed variations ranging from holster rake and barrel length to leather color and number of bullet loops.

Even over the phone Omar sensed my enthusiasm, and I got the impression that he wanted his rig to put a smile on this old cowboy’s face. Well, when I opened the box, I wished he were here to see my smile. This heavy, professional holster and cartridge belt was an example of hand-made professionalism at its best. Steel lines full length of holster, fully lined, double stitched, two different tie downs: strap and leather tie.

Alfonso’s now brings its quality to a full line of leather goods. Today, Alfonso’s services sportsmen, law enforcement, fast draw shooters, and naturally cowboy enthusiasts. If you can take pleasure from the ownership of quality products, a fine rig from Alfonso’s should be high on your list. I know I enjoy mine, whether wearing it or not. In fact, when it’s not on my waist, my Arness gun belt is on prominent display in my den. Give Omar a call.

I loaded up with some factory Black Hills 255-grain Cowboy loads and some 250-grainers loaded by my pal Dave Gandolfo and headed for the shooting range. Once I got to the range it took a while before I could shoot because my rig and gleaming Cimarron pistol attracted a few admirers. After the other shooters ogled the gun, the time came to make some holes in paper, and the results were satisfying indeed. 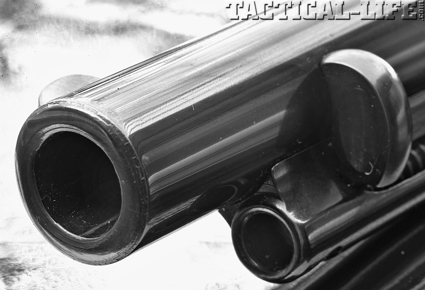 With the two different cowboy loads, the rested Cimarron shot approximately 1.5- to 2-inch groups and unlike my last few SAA purchases, it printed right to point-of-aim at 20 yards. Friends, considering that all my factory Colts had to make return trips home to have their barrels tweaked until that shot dead on, the out-of-the-box performance of the Cimarron Frontier Six Shooter was a joy. It just doesn’t get much better than that. At least not with me shooting.

Cimarron has come up with a real winner, beautiful guns that shoot great. For those who demand and appreciate quality, you have found all that you could ask for with Cimarron and Alfonso’s Gunleather.