0
SHARES
715
VIEWS
Share on FacebookShare on Twitter
New from Legacy Sports International is the Citadel LE Tactical 12 gauge, slide-action shotgun. Produced in the U.S. and targeted for the law enforcement market, this economical scattergun has a 7+1 shell capacity and several different stock options. The receiver on the Citadel LE shotgun is
compact and lightweight, featuring a crossbolt safety on the rear of the triggerguard and the slide action release forward of the triggerguard.

During a good portion of my 34 years (and counting) in law enforcement, the long gun that I have counted on the most has been the 12 gauge pump/slide-action shotgun. That big hole in the end of the muzzle is at the top of the intimidation factor list, as is that sinister, metallic, “chuk-chuk” sound when you work the slide to chamber a round. If that alone doesn’t stop the bad guy in his tracks, then the 8-9 00 buck pellets or the 1-ounce slug will normally take care of matters — given good shot placement and application of proper range limitations. The scattergun has been relied on by American LEO’s since the mid-1800’s when double-guns ruled, then came the 1887 Winchester lever gun, various slide-actions in the 1890’s and finally the semi-automatic from the early 20th century up to this very day. The double barrel and lever action have been pretty much relegated to the past in law enforcement, but the pump gun is still hanging tough and is nowhere near obsolete, as evidenced by the fact that new models continue to be introduced
periodically.

This brings us up to the present and to one of the latest pump-actions to come on the scene, the Citadel LE (law enforcement) shotgun. Offered by Legacy Sports International (LSI), the Citadel line is built by an aerospace manufacturer in Idaho and is targeted for the U.S. law enforcement market. There are three basic models, the primary difference being the type of synthetic stock with which it is fitted. There is the traditional version with the pistol grip stock; another which has a adjustable BlackHawk “Spec-Ops” stock and the version featured here, which has the BlackHawk Talon stock. Common features include a short combat forend (also synthetic), a 22-inch barrel, a 7-shot capacity tubular magazine, plus a lightweight alloy receiver. Add to this its compact handling characteristics and you have quite an appealing package at a very reasonable asking price. 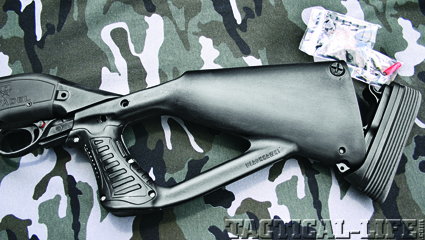 This model of the Citadel LE shotgun features the BlackHawk Talon stock — a skeletonized design with a pistol grip and recoil pad that also serves as a cover plate for a compartment in the stock.

I was drawn to the Citadel LE model with the BlackHawk Talon buttstock, and LSI’s Director of Marketing, Rick Homme, was able to get me a test sample just before I left for a trip to the NRA Whittington Center ranges, outside of Raton, New Mexico, in late May. The test shotgun displayed good quality of manufacture as I surveyed the exterior and what I could see of the interior surfaces and parts. The finish is a dark gray, almost black, non-reflective matte and the synthetic stock is black in color.

The buttstock from BlackHawk is a skeletonized design with a pistol grip that juts down at a fairly sharp angle and elongated oval cutouts with replaceable rubber inserts to ensure a good grasp. The large “hole” formed by an extension from the lower backstrap of the pistol grip to the belly of the stock offers plenty of room for free hand movement, even if one is wearing heavy gloves. The length of pull is 13.5 inches, making the shotgun easy to bring to the shoulder, and it’s capped by a recoil pad, with LSI claiming the stock reduces felt recoil by as much as 70%. A coin-slotted screw at the top of the stock on the left side, near the recoil pad, allows access to a compartment in the butt where stock removal tools and pistol grip inserts are stored. The forend is an ergonomic design, grooved on the sides for good fingertip purchase and serrated along the bottom to better grip the palm.

The Citadel receiver is a bit more compact than ones I’ve seen on other pump shotguns. Like most slide-actions, there is an ejection port in the upper right side of the receiver and a loading port in the bottom. The triggerguard has extra room to accommodate gloved hands and the slide release catch is right out there in front of the triggerguard for quick and easy access. There is a crossbolt safety at the rear of the triggerguard that is pushed from right to left to disengage or left to right to lock the trigger. The top of the receiver is serrated down the middle to help reduce glare, and these serrations are also as close as you are going to get to a rear sight on this shotgun. However, the top is also designed to be capable of accepting optics likes a scope or red dot.

The barrel is easy-on/off and held in place by the magazine cap, which unscrews to allow the barrel to slide out of the receiver. The barrel extension that protrudes into the receiver and the chamber is chrome-lined and the barrel’s choke is a simple cylinder bore. The front sight is a ramped blade, round on the top and looks like it should have a small brass bead or white dot at the rear, but it doesn’t. Maybe a little dab of white paint or one of the wilder shades of fingernail polish available today would make it more visible.