NAT’L GUARDSMAN STRIKES BACK
A professed Satanist who wrote glowingly in his journal how he had enjoyed beating and setting fire to his dog and who reportedly “worshipped” Adolf Hitler, Pearl, MS, High School student Luke Woodham, 16, brooded for a year over the breakup with his girlfriend and other perceived wrongs before he beat his mother with an aluminum baseball bat and stabbed her to death as she lay sleeping. The next morning Woodham drove his mother’s car to Pearl High School, taking a rifle and a handgun.

Wearing an orange jumpsuit and a trenchcoat, he made no attempt to hide his rifle as he entered the school and fatally shot his former girl friend and another girl, then went on to wound seven other students at random until he ran
out of ammo.

He left the school, whether to get the other weapon or to flee is not clear, but Assistant Principal Joel Myrick, an officer in the local National Guard, retrieved a .45 pistol he had locked in his vehicle off campus, and used it to subdue and apprehend Woodham as he attempted to flee in his mother’s car. When Myrick demanded “Why did you shoot my kids?” Woodham replied “Life has wronged me, sir.”

For the murder of his mother, a jury in Philadelphia, MS sentenced Woodham to life in prison. A separate jury in Hattiesburg convicted him on two counts of murder and seven counts of aggravated assault for the shootings. He was given two life sentences for the murders, and seven 20-year sentences for aggravated assault convictions. He will be eligible for parole in 2046. 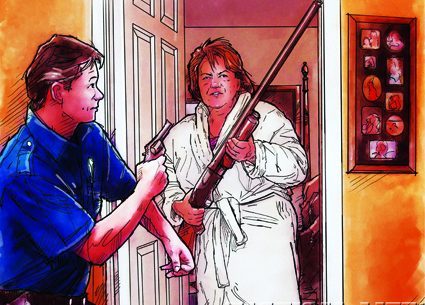