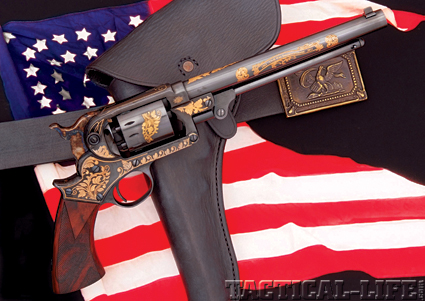 The gold inlaid engraving on the 2011 F.lli Pietta Starr Sesquicentennial tribute was copied from an original engraved Civil War era Starr single-action revolver. The Starr features a laser engraved floral motif and decorations, along with a special Sesquicentennial banner on both sides of the barrel.

At the beginning of the Civil the United States had very little experience as a nation of armsmakers, or as a nation, for that matter, having only been established in 1783 at the end of the Revolutionary War. Early American pistols and longarms had been built using tools and skills brought over from Europe by the colonists, with many early Colonial gunmakers being of German ancestry. Thus the styles and construction of guns that one could define, as being “American” in nature did not become truly established until after the Revolutionary War. As for well-known American armsmakers in the early 19th century, there was only a handful. Most important among them was E. Remington & Sons, established in 1816; there was Samuel Colt’s first enterprise in Paterson, New Jersey, which manufactured guns from 1836 to 1842 before going into receivership, and his very successful second venture, established in Hartford, Connecticut, in 1847. The Federal Government had the Springfield Armory, founded in 1794, and the Federal arsenal at Harpers Ferry, Virginia (now West Virginia), which began manufacturing arms for the US military in 1801. During the years leading up to the Civil War, there also arose a number of smaller American armsmakers, mostly located in the North. 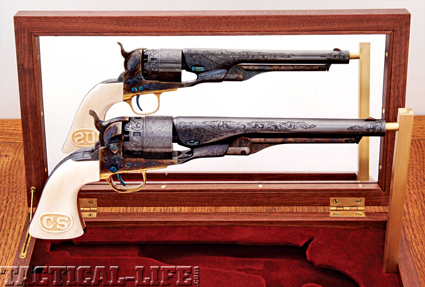 The Adams & Adams 1860 Army comes with a handcrafted display case made by Pennsylvania furniture maker Duncan Everhart, and features a brass stand for the gun that allows it to sit upright and reflect the opposite side in the mirrored case lid. The stand can be mounted on either side to show North or South. 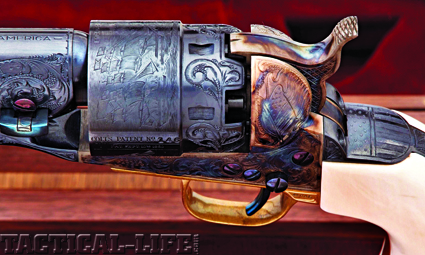 The color casehardened recoil shield on the Adams & Adams is engraved with the Union Jack and Stars and Bars. 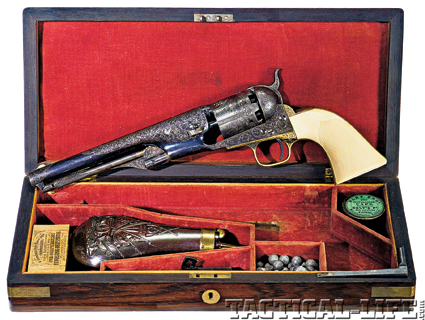 The first Civil War commemorative revolver was done during the Civil War. Known as “Tears of Gettysburg,” it was done by Colt’s master engraver Gustave Young. He engraved the gun in his finest traditional pattern with vine scrolls and animal heads, only on this one revolver, every figure is
crying. A single tear is present in the eye of each of the 11 wolf’s head, dog’s head and American eagle head motifs. (Photos courtesy Rock Island Auction Co.)

The gold inlaid engraving on the 2011 F.lli Pietta Starr Sesquicentennial tribute was copied…