by John Barsness
in Guns, Rifles
0

0
SHARES
44
VIEWS
Share on FacebookShare on Twitter
The Ruger No. 1 has long held a reputation for elegance, but in recent years it’s also become an even more accurate rifle right out of the box. Bill Buckley Photo

When Bill Ruger introduced his single-shot rifle in the late 1960s, a lot of people thought he was crazy, despite Ruger’s previous success with his semi-auto .22 pistol and single-action cowboy revolvers. America was firmly in the Space Age, while the Ruger No. 1 was a semi-copy of the British Farquharson, an action patented in 1872 at the height of Queen Victoria’s reign. Who wanted a Victorian rifle when American astronauts were trying to win the Space Race by landing on the moon?

Well, it turned out quite a few shooters liked Ruger’s retro rifle. Part of the reason was a latent hunger for a quality single-shot centerfire. For years, other manufacturers had assumed that hunters who wanted a single-shot were too broke to afford a repeater. The only centerfire single-shots listed in the 1967 Gun Digest were the Harrington & Richardson Mustang (a .30-30 break-action retailing for $41.95), the Savage 219 (break-action, .22 Hornet and .30-30, $44.50), and the Navy Arms Magnum, built on “refurbished” Remington rolling-block actions (.357 and .44 Magnum handgun rounds, $39.95).

Early No. 1s
Initially, there were eight standard chamberings, ranging from the .222 Remington to the .458 Winchester Magnum, and others could be special-ordered. You could also choose between a light 22-inch barrel and a medium-weight 26-inch barrel, with open sights an optional extra. The forend could be either semi-beavertail or “sporting.” The sporting forend was what is now known today as the Alexander Henry, named after a well-known Scottish gunsmith of the 1800s who built quite a few rifles on the Farquharson action.

The first No. 1s were essentially semi-custom rifles, with Douglas barrels and very nice wood in the buttstocks. As the rifle’s popularity grew, the Douglas company couldn’t supply enough barrels, so Ruger started using barrels from another company. These were mostly good, but now and then one didn’t shoot very well, a problem exacerbated by extremely generous chamber throats in both length and diameter.

Consequently, within a decade or so of their introduction, Ruger No. 1s became known as beautiful rifles that too frequently refused to shoot accurately. In the 1980s, an older gun writer once told me, both firmly and sadly, “John, they will break your heart.”

Despite this warning, I’ve owned quite a few No. 1s in chamberings from .22 Hornet to .450/.400 Nitro-Express. One was an early Douglas-barreled rifle, a well-used .300 Winchester Magnum that would regularly group five (not three) shots into an inch at 100 yards, but some later rifles did not do so well.

The first was a 7×57 No. 1A, the model known as the Light Sporting Rifle, with a slim 22-inch barrel, open sights and Alex Henry forend. It would average no better than 2 inches for three shots, with some groups even larger. Luckily, by the time I traded for that rifle a thriving business had grown up around accurizing No. 1s. The addition of a gadget called a Hicks Accurizer calmed the forend vibrations, shrinking groups to under an inch. The chamber throat, however, was so long that no bullets lighter than 160 grains would shoot well, with the bullets seated out so far the rounds looked top-heavy.

This erratic reputation still follows the No. 1 around, though in my experience its justification ended in the early 1990s, when Ruger started using their own hammer-forged barrels and shortening the chamber throats. My first No. 1 with a Ruger barrel was a .300 Weatherby purchased in 1995. Straight from the factory box, it grouped just about as well as that Douglas-barreled .300 Winchester. Ever since then, the new No. 1s I’ve purchased (perhaps a dozen) have either shot very well or responded easily to minor tuning. 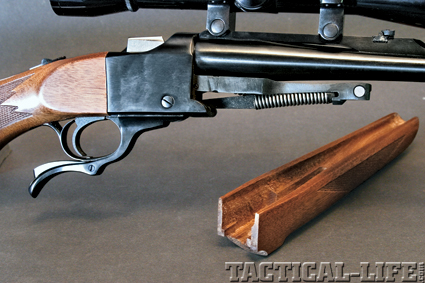 Ruger No. 1s made in the last 20 years usually shoot accurately right out of the box, but if not, minor modifications to the forend almost always cure the problem. 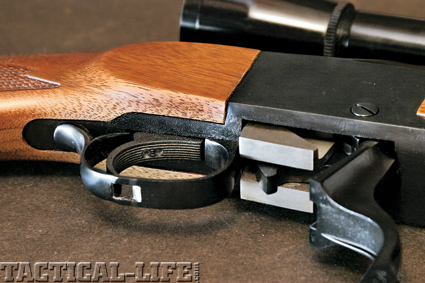 The two “adjustment” screws in the face of the today’s Ruger No. 1s supposedly adjust weight of pull and over-travel, but John has never found them to make much difference. Luckily, the factory trigger pulls of recent rifles are pretty darn good.

Ruger’s Revamp
The least consistent No. 1 is still the Light Sporter, simply because of the skinny barrel. The barrel of the 1A Light Sporter in .30-06 sent for testing measures 0.558 inches at the muzzle—pretty slim, especially with a .30-caliber hole in the middle. The rifle is also very light overall; with a 6×36 Leupold mounted in the factory Ruger rings, the rifle weighs exactly 7.5 pounds, the lightest scoped weight for any Ruger 1A I’ve ever put on a scale, no doubt due to the very plain wood of the buttstock. These days not as many No. 1s come out of the factory with fancy-grained walnut, though some appear now and then.

The triggers on the originals had three screws to adjust the pull for weight, creep and over-travel. The creep adjustment eventually disappeared, and ever since there have been two small Allen screws in the face of the trigger that supposedly adjust the sear engagement and over-travel. I say “supposedly” because I’ve fooled around with a bunch of No. 1 triggers and never found these screws to make any discernible difference.

The rifles from the long chamber-throat era tended to have pretty heavy trigger pulls. Because the pull couldn’t be easily adjusted, several custom triggers for No. 1s appeared on the market, but in recent years, the factory trigger pulls have been pretty decent—they often lighten up a little bit through use, as the sear/trigger edges smooth slightly.

The trigger on the .30-06 test rifle, for example, averaged 3.75 pounds when new, with a slightly gritty break. After a couple of range sessions, the pull averaged 3.5 pounds and lost the gritty feel. The other recently made No. 1s in my personal collection have factory trigger pulls that range from 2.75 to 4.5 pounds—quite acceptable in hunting rifles.

These days, the primary accuracy factor in Ruger No. 1s is the fit of the forend, attached by an angled screw about 6 inches in front of the action. The screw turns into a freely turning cylinder at the front of a “hanger” extending forward from the action. The hanger also holds the ejector and trigger springs, which can cause some variation in forend pressure on the barrel. Some people totally free-float the forend, but I’ve found that the only real problem with recent rifles is uneven tension. This isn’t caused by the springs on the hanger, but the rear of the forend pressing against the front of the action.

In my experience, the majority of post-1990 No. 1s shoot fine right out of the box. If they don’t, I remove the forend and look for a dark area of compressed walnut at the rear of the forend where it butts up against the front of the action. A little light file work removes the compressed wood, relieving pressure on the forend.
The rear part of the test rifle’s forend showed some compression, especially on one side. I carefully filed the compressed areas, then replaced the forend, tightening the screw firmly but not “farmer tight.” After mounting the scope, I gathered some factory loads and headed for the range on a calm, cool morning in early July. 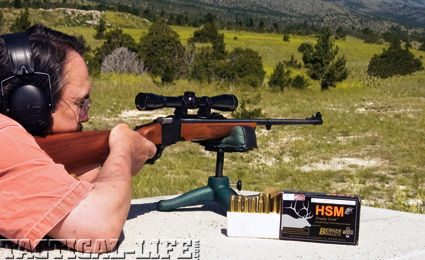 Range Work
The ammo used to sight-in was from The Hunting Shack, a Montana company that produces a lot of military ammunition but also specializes in offering factory loads with the hunting version of the Berger VLD. This particular load featured the 168-grain VLD, and has shot well in several other .30-06s.

Light-barreled rifles, however, are often much pickier about the loads they prefer. Three-shot groups with the No. 1A averaged 1.76 inches—good enough for normal deer hunting but not over-the-top accurate. A Winchester Supreme load with 180-grain Nosler E-Tips shot about the same, averaging 1.98 inches for 3-shot groups. The E-Tip, however, is Nosler’s deepest-penetrating bullet, a “non-toxic” design made of the same gilding metal alloy used on the jackets of Nosler’s other bullets, including the Partition. It’s primarily meant for game larger than deer, and 2-inch accuracy is plenty for elk.

To tell the truth, by then I was getting somewhat discouraged, but the last two loads tested brightened the day. The first group from Federal’s Premium load with 150-grain Nosler Ballistic Tips measured 1.03 inches, and every group after that went under an inch. The last group, in fact, had all three holes touching, measuring 0.42 inches from center to center, resulting in an average of just over 0.75 inches for four groups.

The last ammunition fired was Winchester Super-X with the 165-grain Pointed Soft Point bullet. This load averaged 0.93 inches—plenty for pronghorn or elk. Essentially, the No. 1A Light Sporter acted like any light-barreled bolt-action rifle, showing definite preferences in ammunition, and shooting very well with ammo it liked.

Another big improvement was definitely noticed while shooting off the bench. A few years ago Ruger started putting actual recoil pads on their rifles, made of a much softer material than the tire rubber formerly used.

Born Hunter?
The Ruger No. 1A Light Sporter is a delight to hunt with due to its light weight and length. Due to the short receiver, the 1A is only slightly over 38 inches long, 4 to 5 inches shorter than a typical .30-06 bolt-action with a 22-inch barrel. This doesn’t make all that much difference in most hunting, but once in a while—such as when sitting in a tight whitetail blind—you really notice the “missing” length.

Over the decades, I’ve hunted over a dozen species of big game, from pronghorn to Cape buffalo, with various Ruger No. 1s, and never lost an animal because the rifle was a single-shot. However, calling the No. 1 a single-shot isn’t entirely accurate because it can be quickly reloaded thanks to the ejector. Perhaps it would be more appropriate to use the British term: single-loader.

Some big-game hunters attach extra rounds in an elastic holder on the rifle’s buttstock, like the one made by Uncle Mike’s. Still, others prefer a shell holder on their belt, wrist or in their pocket. I’ve done all three, but I generally just make sure my hunting jacket or shirt has chest pockets, and keep an extra round in each. With practice, I’ve become at least as fast as the average bolt-action hunter, though anybody who hunts regularly with a single-loader also tends to make sure the first shot goes where intended. I’d be willing to take this little 1A .30-06 about anywhere in North America or Africa, for any game smaller than brown bears or Cape buffalo, and not worry in the slightest about coming home with an unfilled tag. For more information visit ruger.com.