WASHINGTON, Dec. 7, 2009 – The United States and its allies are still open to negotiations with the Iranian government to resolve international concerns about its nuclear program, National Security Advisor James L. Jones said yesterday.

However, the “clock’s ticking,” Jones said, regarding Iran’s continued refusal to accede to International Atomic Energy Agency inspections of its nuclear facilities.

The international community is concerned that Iran is trying to develop nuclear weapons by enriching uranium used for its nuclear power plants. The Iranian government has denied such claims and insists its nuclear program is used only to generate electric power.

The IAEA, based in Geneva, is a U.N.-sponsored organization that cooperates with its member states and partners worldwide to promote safe, secure and peaceful nuclear technologies.

Jones, who was interviewed on CNN’s “State of the Union” program yesterday, also told host John King that Iran is welcome to again come to the negotiation table to resolve concerns about its nuclear ambitions.

In September, it was revealed that Iran was building a secret uranium enrichment plant near the town of Qom.

Negotiations held in Geneva in early October between Iran, the United States, the United Kingdom, France, Russia, China and Germany came to naught after Iran reneged on an agreement to send its uranium to France and Russia for further enrichment processing. After the IAEA rebuked Iran for its covert uranium enrichment in Qom, the Iranian government announced it would build 10 additional uranium enrichment plants.

White House Press Secretary Robert Gibbs noted in a statement issued Nov. 29 that “time is running out for Iran to address the international community’s growing concerns about its nuclear program.”

The Iranian government has so far declined to attend another meeting about its nuclear program. Despite the impasse, Jones said, the United States and its allies still are open to negotiations with Iran.

“The IAEA is still working feverishly to try to bring this about,” Jones said of efforts to restart negotiations with Iran. Meanwhile, Jones described what has been presented to Iran at the negotiating table as logical, fair and reasonable.

“And if Iran wanted to signal to the world that it wishes to participate more fully in the family of nations, this is a very, very good way for them to do this,” Jones said.

It also is causing serious concern, Petraeus said, that Iran continues “activities to arm, train, fund, and direct extremists in Iraq, southern Lebanon, Gaza, and to a degree, western Afghanistan.” 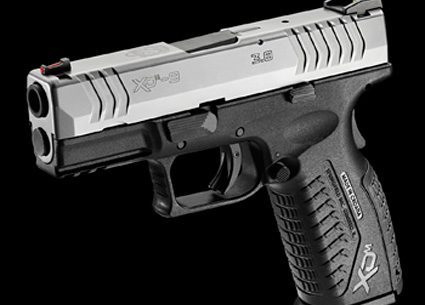 Springfield adds a new dimension of tactical response, technology, and personalization with the 3.8...