Taking a quick trip  over to the Cabela’s website I found that Remington UMC 9mm FMJ ammunition could be had for $78.99 for 250 rounds. By comparison, the .223 UMC ammunition was $154.99 for 300 rounds. This makes the 9mm essentially 30 cents a round while the .223 was about 50 cents per shot. If a person could train with an AR platform rifle chambered in 9mm, they could save 20 cents per trigger pull. 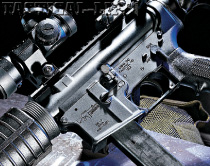 Well, guess what? You can have an AR/M4 platform rifle that feeds 9mm and CMMG, Inc. is offering that carbine right now. The firearm is titled the “M4 LE 9mm” rifle.

This carbine-length gun has a 16-inch barrel made of 4140 Chrome-moly vanadium and it is coated in what CMMG calls their WASP (Weapons Armored Surface Protection) finish. It is in essence a treatment, not a plating, and gives a better protection than traditional chrome plating.

Rifling is a 1-in-10-inch twist with a muzzle brake that is of NATO style birdcage. The upper receiver is an A3 variety including a flattop rail. The standard “A frame” front sight housing has a bayonet lug and forward sling swivel. Handguards are typical M4 style.

Mimicking the M4, the lower receiver has a retractable stock, AR pistol grip and all the controls you would find on an M4 style carbine. The most notable difference between the M4 LE and a 5.56mm M4 is the fact that, unlike other 9mm converted lowers with plugs; the CMMG lower receiver was purposely machined from 7075-T6 aluminum to accept a 9mm stick magazine.

As for the action, the trigger assembly on this rifle is semi-automatic and the gun operates not by gas-impingement but with a straight blowback. The manual safety, magazine release button, charging handle, bolt catch, and both the pivot pin and takedown pin are stock AR.

Fitted onto the flattop rail was a fold-down/flip-up rear sight. This sight is adjustable for windage and has dual apertures; large and small, just like an A2 rear sight. The A2 front sight adjusts for elevation with quarter clicks.