by David Kenik
in Guns, Rifles
0

"If anyone says that there in no real innovation in ARs anymore, they obviously have not seen Cobalt Kinetics."

After a few decades of shooting, writing and teaching, I am quite jaded when it comes to new gear. To pique my interest, new products need to not just be new or different, they also have to be useful and practical. It takes a lot to catch my attention and stir a reaction, but that’s exactly what happened when I perused the Cobalt Kinetics booth at the 2016 SHOT Show. What first caught my eye were the bright and bold colors of its rifles, then their sharp, angular designs. I was so involved in their visual appeal that it took me a minute or so to recognize their most unique feature: dual forward assists.

Of course, you probably already know that a forward assist is designed to push the bolt forward to help chamber a stubborn round. But with today’s highly reliable rifles, the forward assist is rarely needed—so much so that some AR designs have removed them completely. If the feature is so rarely used, why would the folks at Cobalt Kinetics choose to put two forward assists on their rifles? Well, they have another sly trick up their sleeve: both forward assists perform double duty. They also act as bolt releases. Darn, why didn’t I think of that? 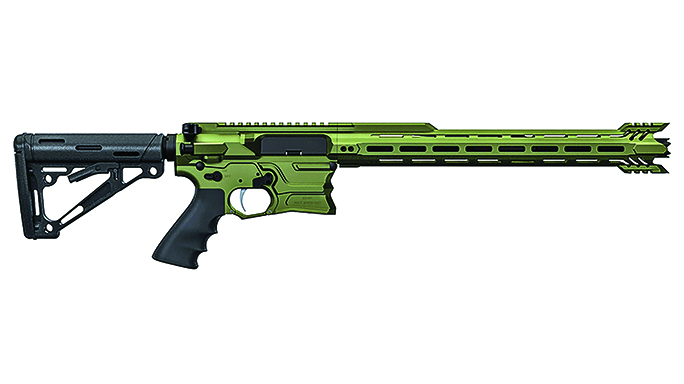 Completing the reload is sped up by releasing the bolt by way of the forward assist because the shooter’s thumb can be pre-staged on the forward assist and pressed the instant the magazine is seated. With a forward assist on both sides, the feature is fully ambidextrous. Since the assist is large and easy to find with the thumb, pressing it is a simple gross-motor skill that is easy to perform, even with gloves. Whether for military use, police duty, self-defense or sport, the added speed is valuable in any situation that requires quick reloading. Saving even a second can be a lifesaver when lead is flying in your direction.

While looking at the pictures of these colorful guns and their elaborate designs, you may first mistake them as nothing more than fancy race guns made for competition. But that’s not the case. Their quality, reliability and unique features are well suited for the hard use seen by military and police weaponry. Cobalt Kinetics tested these guns to 40,000 rounds without any of the parts (beyond gas tubes and gas rings) failing. The company’s engineers shot and cooled them in 10,000-round increments. The testing also included dirt testing with the rifles buried then shot. With no major malfunctions, they stopped testing when the 40,000-
round mark was reached.

Anything that speeds up magazine changes during a firefight and simplifies the process is a welcome addition. And if these colors are not your fancy, Cobalt Kinetics will shortly introduce its rifles in black.

Having just started business in April of 2014, Cobalt Kinetics did not take the customary path to the market, making traditional products and then innovating later. Rather, the company burst out of the gate at 100 miles per hour with a very striking design and some of the most unique features on the market.

While the rifle company is new, the owners are not new to manufacturing. They have been in the business for more than 30 years. They started Cobalt Kinetics because they saw the current market was stagnant, and they wanted to breathe new life into it with innovative products. The owners noticed that there was a large emphasis in training for quick pistol-magazine changes, and they wanted to accelerate that task on the AR platform.

It only took four months for the founders to create a working prototype using the initial concept of the dual forward assists. Now fully operational, Cobalt Kinetics has 18 employees working in manufacturing, assembly and sales.

The company’s first two products are the BAMF (Billet Aluminum Modern Firearm) and BAMF Edge, which I was recently sent for testing. Both feature dual forward assists, distinctive designs and come in a choice of vibrant color combinations. The differences between the two models are subtle. The BAMF includes a Hogue collapsible stock and a linear compensator that is designed to push the muzzle blast forward. This model is available with either a 14.5- or 16-inch barrel.

The BAMF Edge includes Cobalt Kinetics’ fixed, billet-crafted buttstock as well as the Edge compensator, which spreads the muzzle blast to the sides. BAMF Edge carbines are available with 14.5-, 16- or 18-inch barrels.

Unusual for a startup, Cobalt Kinetics makes most of the major components in-house, including both the upper and lower receivers, which are machined from a billet of 7075-T6 aluminum. According to the company, the receivers are “custom mated pairs,” meaning they’re fitted by hand.

The BAMF and BAMF Edge also feature unique handguards machined in-house from a billet of 7075-T6 aluminum. These free-floating handguards feature 2-inch rails on the top and bottom, near the muzzle, for mounting sights, lights or a bipod. With these rails, the front of the handguard has four aggressive points that could be used to secure the rifle against a corner. The sides of the handguards feature M-LOK slots for accessories and numerous lightening cuts.

The fixed, billet-crafted stock on the BAMF Edge is as rock solid as it is distinctive. The stock is built around the buffer tube, which is partially left exposed as part of the design. It looks great and works well.

Niceties are jam-packed into these rifles. They both use nickel-boron-coated bolt carrier groups from WMD Guns that have been shot peened and magnetic-particle (MP) inspected. The chrome-lined, 1-in-8-inch-twist barrels are made by Faxon Firearms. They also have .223 Wylde chambers, thus allowing a higher degree of accuracy with a wide range of .223 Remington and 5.56mm NATO ammunition. The rifles use mid-length gas systems and adjustable, low-profile gas blocks.

For controls, both guns feature ambidextrous, 45-degree safety selectors from KE Arms as well as Raptor ambidextrous charging handles from AXTS Weapons Systems. The ambidextrous magazine release is an extended design from Odin Works, and even the traditional thin, stamped ejection port cover has been replaced with a thickened model for another distinctive touch.

The triggerguard and bolt catch use threaded pins instead of roll pins, which makes removal and installation much easier. Even the detents for the pivot and takedown pins are held in place with threaded pins so you can remove the components without losing the detent. It’s a genius touch.

Both rifles use DMR triggers from KE Arms. These are single-stage, one-piece, drop-in units with 4.5-pound pull weights and adjustable resets. The triggers are precisely crafted from A2 tool steel that is then titanium-nitride coated.

Taking them out of the box, I was just as awestruck by the colors and design as when I first saw them. As expected, the finishes were flawless on both guns. The fit was equally good, with no wiggle between the receivers, yet the pivot and takedown pins were easy to remove. The KE Arms triggers were crisp and clean.

After photographing the rifles, I ran every type of ammunition that I had on hand through them to test their functioning, including rounds from Hornady, Black Hills and HPR as well as some PMC, Federal, Hunting Shack, Guatemalan surplus and Prvi Partizan loads. Not surprisingly, the rifles ran every load well. Their actions were very smooth, and the rifles handled as expected.

The dual forward assists/bolt releases worked perfectly every time. It only took a little practice using the forward assist to release the bolt for it to become intuitive and easy.

Next came the 100-yard accuracy testing. The barrels are rated for sub-MOA accuracy, and I wanted to see how “sub” I could get. Shooting the BAMF from prone with a bipod and a bag rest, I received the best group with Black Hills’ remanufactured 75-grain match HP ammo, which measured 0.75 inches at 100 yards. Hornady’s 75-grain BTHPs clustered into an inch. Third place went to HPR Ammunition’s 62-grain Black Ops OTF ammo, with a 1.87-inch group.

Since I could envision the BAMF Edge version, with its longer barrel and fixed stock, being used for sniper or designated marksman duty, I was interested to see how the unique stock design would perform while shooting prone. Despite the stock’s unconventional design, I had no problem steadying it with a shooting bag. Of course, since the stock isn’t collapsible, it can’t be adjusted to fit a wide range of shooters or optics. If the rifle will be used in varying roles with different shooters, the collapsible-stocked BAMF might be a better choice. 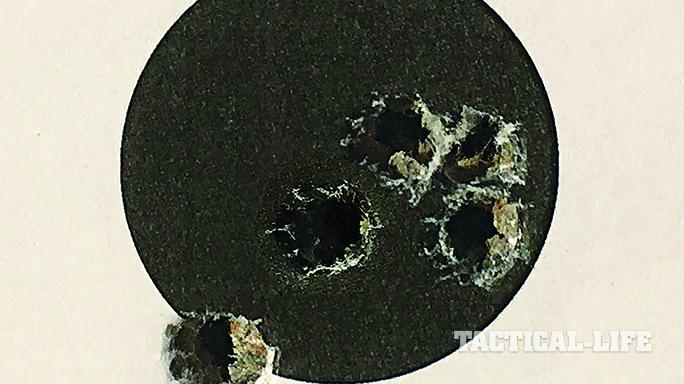 While Cobalt Kinetics didn’t go into great detail with me about future innovations, the company did share that it plans on offering 300 Blackout rifles soon and was considering a .308 option as well. In the near term, expect black rifles for military and law enforcement personnel, an option for full rails on the top of the handguard for night-vision accessories, short-barreled versions for entry work, and a model designed for 3-Gun competition right out of the box.

As much as I hate to use the expression, everything about the test rifles, from the fit, finish and function, oozes quality. These BAMF rifles are made with top-quality components and offer several unique improvements. If anyone says that there in no real innovation in ARs anymore, they obviously have not seen Cobalt Kinetics.