0
SHARES
0
VIEWS
Share on FacebookShare on Twitter
Wanted: Your Under Fire Stories! TW would like to hear from you! Email your submission and photo to tactical-life@harris-pub.com. We pay $100 for any featured story! 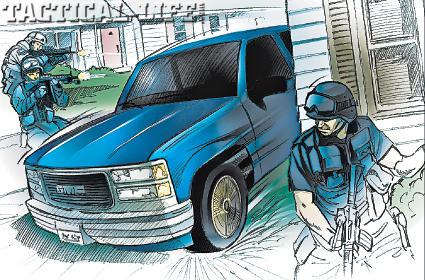 In Marion County, Indiana, a suspected cocaine dealer tried to run down two sheriff deputies as the undercover officers approached. A S.W.A.T. team standing by was called in for backup as the suspect tried to escape. The S.W.A.T. team deployed from a rolling armored vehicle only to witness a dark blue SUV with massive gold-spoked wheels charging them across the lawns of a residential area in an attempt to escape. S.W.A.T. Capt. Benny Diggs made the decision to use deadly force and the team immediately opened fire from both sides of a street.

As a result of taking fire, the suspect lost control and hit another vehicle parked along a curb. Deputies quickly surrounded the wrecked vehicle with caution, fearing the suspect might be armed.

Even after driving through a gauntlet of fire, deputies closed in to discover a gun within reach of the suspect. Separating the suspect from his weapon, the man was taken into custody, only having taken a single shot to the arm.