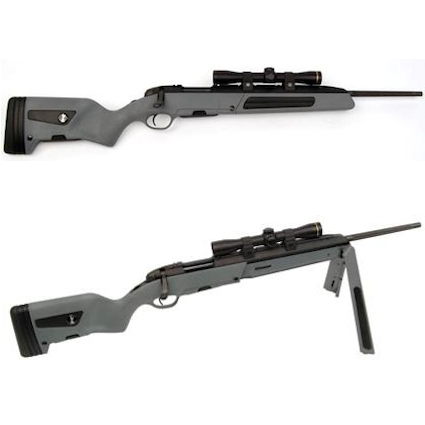 Due to overwhelming customer demand, Steyr Arms is now offering its legendary Scout rifle with the original gray stock. Reintroduced at the 2010 NRA Annual Meetings as part of the limited Jeff Cooper Scout Commemorative Package, the gray-stocked Scout sparked a renaissance in Lt. Col. Jeff Cooper’s all-purpose scout-rifle concept that redefined the “one man operating alone” survival rifle more than a decade ago. And now, Steyr Arms is pleased to announce that its Scout rifle is once again available with a gray stock in a rifle-only configuration.

With the rage over modern sporting rifles—or “mouse-guns” in Col. Cooper vernacular—and their increasingly burdensome array of accessories waning, common sense has seemingly returned to the American rifleman, as the Colonel’s lightweight, .308-caliber bolt-action, rabbits-to-elk, bug-out Steyr Scout rifle has eclipsed its initial sales figures. It’s become so popular within the last 13 months that yet another company has made an attempt to emulate Col. Cooper’s intent. While Steyr heartily welcomes another horse to the race, the fact still stands that Col. Cooper joined forces with only one company when he sought to create a production Scout rifle. That company was Steyr Mannlicher, and the light, quick and accurate rifle that resulted after nearly a decade of collaboration between Steyr and Col. Cooper, was the Steyr Scout.

The gray-stocked Steyr Scout may well have been ahead of its time during its introduction in 1998. Several low-powered, long-eye-relief scopes are still available today, but the market is now teeming with one-power reflex sights that can be forward-mounted to provide the user with accurate fire and the ability to operate with both eyes open in order to immediately detect flanking dangers. Backup “ghost-ring” iron sights that rest snugly within the Steyr Scout’s profile can be deployed within seconds should the optics fail.

Colonel Cooper felt the 1903 Springfield’s magazine cutoff was a “superior device” to anything then produced, but Steyr filled Colonel’s prescription from a different direction with the incorporation of a newly designed two-position magazine system that allowed the rifle to be fed singly with the five-round magazine in a lowered position. The magazine could be seated one step further with minimal pressure, allowing the bolt to feed cartridges directly from the magazine. The Steyr Scout’s magazine then becomes flush fitting, and that is a feature that can be found on all current-production Steyr rifles with a double-stack removable-box magazine. An optional high-capacity magazine adaptor and 10-round magazines are also available for the Scout.

Steyr engineers knew that to build an optics-topped Scout rifle that weighed in at less than seven pounds—as Col. Cooper required—they would need to employ a polymer stock, but Steyr engineers surprised Cooper while taking the rifle to a new level when they showed him a bipod that was seamlessly integrated to the stock. An opening for a second box magazine was also designed within the buttstock to keep a backup five- or 10-round magazine held in ready reserve, flush along the bottom of the stock. Also seamlessly incorporated were five push-in-and-turn-to-lock sling swivels attachment points in the stock that would facilitate the addition of Cooper’s favored Ching Sling. This sling allows the shooter to lock himself into the rifle much in the same way as the loop sling allows the Marines of his beloved Corps to become one with their rifles in order to successfully engage targets at distances at 500 meters and beyond.

But Steyr wasn’t finished with the Scout concept just by showing him a few cool concepts that would aid the lone rifleman to shoot more accurately. Steyr’s engineers incorporated the newly designed Safe Bolt System (SBS) action into the Scout rifle to allow the shooter to carry a loaded firearm in an absolutely safe condition. The SBS action would quickly prove its roller-tang safety selector could be placed in a secondary safe position with a round in the chamber, and when the bolt lever was pushed down, the firing mechanism and firing pin would be locked out of position to fire, resulting in a safe firearm—even with a cartridge in the chamber.

The overall length of the Steyr Scout was kept within Col. Cooper’s maximum requirement of exactly one meter (39.4 inches) by way of a hair-splitting, cold-hammer-forged 20-inch barrel that was fluted for heat dissipation and weight reduction.

“Steyr has done a remarkable job of bringing my original concept to reality,” said Col. Cooper in 1998. “The Steyr Jeff Cooper Scout system is everything you could want in an lightweight, all-purpose rifle that can perform virtually any task!”

Proudly displaying Col. Cooper’s crest-of-arms inlaid in the stock, the reintroduction of the Steyr Scout in its original gray signifies a return to sanity for today’s rifleman and the challenges he may face. The Steyr Scout is still available in an all-black configuration as well as a Realtree pattern and a Timber woodgrain profile. Limited numbers of the complete Jeff Cooper Commemorative Scout Package are also available.

So go ahead, and accept a substitute. Colonel Cooper didn’t. 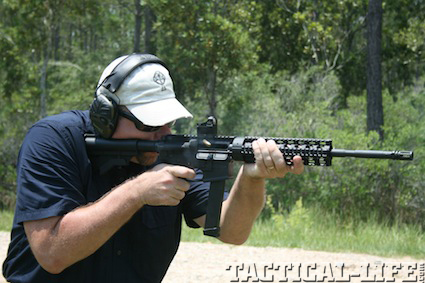