0
SHARES
3
VIEWS
Share on FacebookShare on Twitter
Compact Thunder! The Colt SCW takes AR weapons to the next level of compactness without compromising accuracy or firepower. The Monolithic upper free floats the 10.3 inch barrel. The rifle performed well with both Iron and Red-Dot sights.

From a need came a solution. Engaging targets from the confines of a vehicle, in narrow hallways or some other cramped, constricted, tight hell hole is what many LE and military personnel are faced with in the course of duty. Colt Defense calls their solution to the need for a highly maneuverable weapon in a caliber that stops bad guys dead the SCW (Sub Compact Weapon). But the SCW is not just a short-barreled version of an AR-15, it stuffs full AR-15 firepower in a package that is smaller than most compact 5.56x45mm weapons and it does it with no compromises.

It’s one of those in-between weapons that bridges the gap between a handgun and a rifle. It finds itself not only useful within the confines of a Humvee wielded by a soldier, but also within the restrictions of armored executive vehicles like a Suburban or Mercedes S500 in the hands of security or personal defense contractors. Using the one-point sling and harness the SCW has the ability to disappear under a suit jacket yet become available at a moment’s notice. 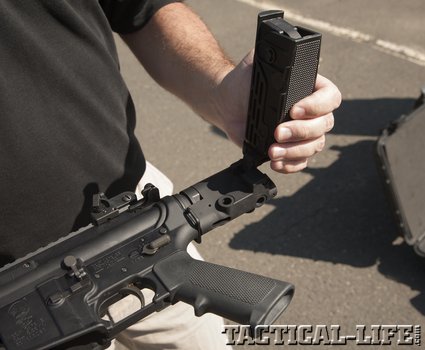 The stock of the SCW quickly and effortlessly folds up and locks on the left side of the weapon. With the stock collapsed the SCW is a compact package that can be stored in a myriad of small places.

Many manufacturers of subcompact ARs chop the barrel to pistol-barrel lengths. That helps the maneuverability and cuts down on the overall length, but as you reduce the barrel length muzzle velocity and effective range decrease, too. And snubbing the barrel does nothing to help reduce the buffer tube length, which on many subcompact ARs sport the same dimensions as that on a full-size carbine or rifle. The engineers at Colt Defense took a different approach with the SCW. The SCW features Colt’s proprietary Monolithic upper. Colt’s Monolithic upper receiver is manufactured from a chunk of forged aluminum. The forging is placed in a CNC machine that quickly and methodically removes metal until a familiar upper emerges that also has an uninterrupted full-length top rail and side rails. The fourth bottom rail is made of polymer and snaps into the upper. You can use the bullet point of a cartridge to press the release then the bottom rail pivots away. All four Picatinny rails allow an operator to attach a vertical handgrip, optics or tactical light accessory.

The monolithic upper also allows the barrel to free-float. The gas block is built into the folding front sight. The barrel features a bayonet lug. At slightly over 10 inches, the barrel provides the optimum length for compatibility and effective range to 400 meters. The free-float upper gives the SCW an edge in accuracy. Its bore has a 1-in-7-inch right-hand twist rate. This quicker twist rate make the SCW better suited to heavier bullets. The gas port is slightly different than the gas port on an M4’s 14.5-inch barrel; this is to compensate for the SCW’s short barrel. Muzzle velocity falls as barrel length decreases and the SCW loses about 270 fps compared to the same round fired out of an M4. Shorter barrels also mean more muzzle flash. Without a flash suppressor, the SCW or any subcompact weapon looks like a flamethrower in dim to dark conditions—this is caused by burning powder as it leaves the abbreviated barrel. Colt Defense wisely opted to cap off the SCW’s barrel with a Vortex G6-A2 flash suppressor. The Vortex suppressor is designed with four slightly twisted tines that swallow up muzzle flash. The barrel nut is different and does require a special tool. Monolithic uppers require monolithic-upper-specific barrels. The same Mil-Spec gas impingement system used in Colt’s M4s and other rifles is employed in the SCW.
The MaTech folding sights are precision machined and are the same type used on Colt’s other military and LE M4 carbines. Press the release and the sights quickly and effortlessly pivot up and lock in place. 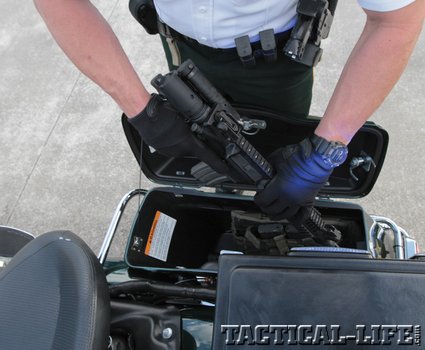 With the stock collapsed the SCW is a compact package that can be stored in a myriad of small places.

Just as the monolithic upper is not your ordinary upper receiver, the lower receiver of the SCW is designed with a reduction length in mind and definitely not your typical lower. Typical ARs have a long receiver extension tube that houses the action spring and buffer assembly. This assembly pushes the carrier forward after a shot is fired. I knew something was drastically different when I cracked open the SCW. It disassembles like a typical AR—pull out the takedown pin and pivot the upper away from the lower. On the SCW the action spring and buffer are one connected and the action spring is withdrawn from the receiver extension as the upper is pivoted away from the lower. The SCW’s buffer assembly fits into the rear of the carrier. The buffer assembly is modified so it fits into the carrier, which is cut down but an inch or so. By slightly changing the way the parts work with each other, Colt was able to reduce the total length of receiver extension. This makes the SCW not only compact on the business end but on the operator’s end, too. The adjustable stock has five positions. When completely retracted it folds compactly on the left side of the weapon and is completely out of the way from a user’s firing hand even if the user is wearing bulky gloves. Press the release and the stock folds out from the side of the weapon and snaps into place at the rear of the abbreviated receiver extension. The stock butt then folds down and the stock length can be adjusted.

The lower receiver like the upper is built from a forging. If anything on the SCW lower is common it’s the A2 style pistol grip. I like A2 grips since they are skinny and with my average-sized hand, bare or in a glove, I can wrap my fingers around it for good purchase.

The single finger groove allows a good fit for all hand sizes and just enough control without jamming up your fingers with multiple grooves that don’t fit any hand. The fire control lever is ambidextrous. Like all military/LE ARs so quipped forward is “safe,” vertical is “fire” and rearward is “auto.” The controls worked exactly how the military specified. The bolt catch allowed the bolt to slam home and the magazine release dropped mags like it wasn’t even holding them. A standard Mil-Spec aluminum magazine is included with each SCW, though it will take an assortment of aftermarket magazines. Black rifles being as black rifles are, the entire weapon is finished in an anodized matte black. 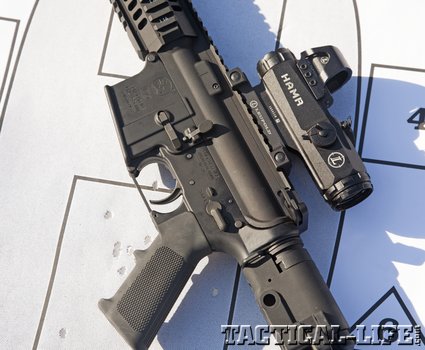 My time with the SCW was limited but I wrung out two of them for as long as the ammo held out. Colt Defense made arrangements with the Farmington (Connecticut) Police to borrow their range, which abuts farm fields. No doubt the woodchucks in the adjacent field were nervous when the SCW screamed in full-auto, but then again maybe they are used to the sound. Two SCWs were tested. I also had the opportunity to compare the SCW against two M4s—a LE6920MP-FDE tricked out with a Magpul stock, handguard and pistol grip; and a LE6940P, which uses an articulating link piston system.

The first SCW fired was equipped with a Leupold Mark 4 HAMR (High Accuracy Multi-Range) riflescope. The HAMR features 4X magnification with a 24mm objective and is designed for precise mid-range target engagement. Piggybacking on top of the HAMR is Leupold’s DeltaPoint reflex sight build with close quarter tactical scenarios in mind. The HAMR uses a red illuminated chevron. 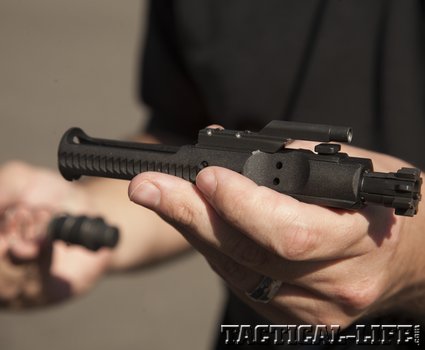 The bolt carrier is shorter than a typical one. The buffer assembly and action spring are one piece that fits into the aft end

I unfolded the stock without any instructions. It was intuitive. The SCW shouldered easily and it felt solid and connected even though the butt was slightly thinner than a Mil-Spec M4’s buttplate. From the onset in semi-automatic fire the SCW and I connected. As long as I concentrated on my trigger work, it rewarded me with fist-sized groups at 25 yards. The trigger pull weight is spec’d at five to eight pounds. It was quick to engage multiple targets. I was able to move it fast without it getting ahead of me. Switching to the SCW with open sights I noticed the stubbiness of the barrel more though the SCW continued to work exceptionally. I brought the flip-up sights quickly online and the simplicity and ease of use again allowed me fist-sized groups. Wherever I held the sights, groups clustered tightly.
Adjusting the SCW’s stock length provided sufficient length for my average build. When folded the SCW was compact, maneuverable and easy to control in semi-automatic fire. Shooting from the hip in its most compact configuration, I soon realized the SCW was a chopper capable of sending downrange a controllable swarm of 5.56mm bullets. In full auto, my guess was the SCW would have a lot of muzzle lift. The muzzle did rise but it was very controllable. Leaning into the SCW and firing small bursts—quickly pulling and releasing the trigger—the SCW placed lead on the target and placed it such that it would incapacitate a hostile combatant. With longer bursts the muzzle rose and that was when I was sure the woodchucks were in all-out hiding mode. But there was never a point where the full-auto fire went off target. I braced my support hand on the top of the monolith upper and from the hip full-auto ripped through targets. The SCW spat out empty cases without a hitch. Magazines fell to my feet when I let them.

I alternated between the Colt LE6920MP-FDE and a LE6940P M4s, and though M4s are short rifles they seemed much longer next to the SCW. M4s are maneuverable but compared to the SCW they lumber whereas the SCW was agile. The recoil between the M4s and SCWs was nearly the same and the accuracy was indistinguishable. They all shot nice groups in my off-hand stance. The difference in recoil between the gas impingement and piston system was small. The real difference in the systems can be seen in full-auto fire.

The SCW is a ferocious piece of weaponry that uses the same ammunition and magazines as the M4 and AR rifles. There are standing orders for five U.S. agencies. Mexico and Israel are already fielding the SCW as well as the LASD (Los Angeles County Sherriff’s Department). I can’t confirm that the SCW is in the hands of private security firms—and quite frankly you won’t know, since SCW is a compact package that can be discretely carried yet brought into action quickly.