Need a gun that will be good for hunting, home defense, pest control, competition, target practice, plinking, patrol duty or—fill in the blank?

One of the problems shooters face is getting a gun for each of the tasks above—and that can be pretty expensive. So they begin searching for a versatile gun that can fill many roles. After sorting through numerous options, lots of shooters conclude that they can buy just one AR-15 and use it for pretty much anything they want. 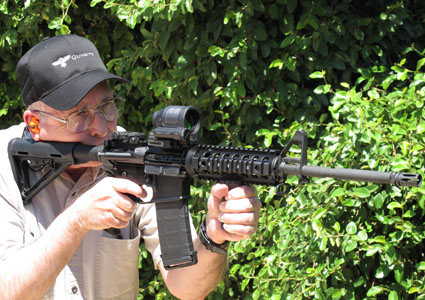 With the low recoil generated by the 5.56mm round, the gun is easy to shoot but is powerful enough for self defense, law enforcement or hunting some game.

As originally designed, the AR-15 was suited for a specific military duty—that of equipping soldiers with a small, portable arm. If you wanted iron sights and a carry handle, you were all set. Optics were not an option until someone decided they needed to look through glass instead of lining up two metallic reference points. Then a method of attaching a scope to the carry handle was invented, but that turned out to be only a marginally satisfactory solution. Eventually, someone decided to remove the carry handle and put a rail that would accept an optic mount on the top of the upper receiver. That soon evolved into the Mil-Std 1913 “Picatinny” rail, making the gun somewhat more versatile.

But as the mission of our warfighters grew, needs changed and flashlights began to be taped to the handguards so an operator could see what he was aiming at in the dark. That also turned out to be only marginally satisfactory, but then someone got the idea of putting an M1913 rail on the handguard to make it easy to mount a flashlight—or anything else that could be fitted with a proper mount. 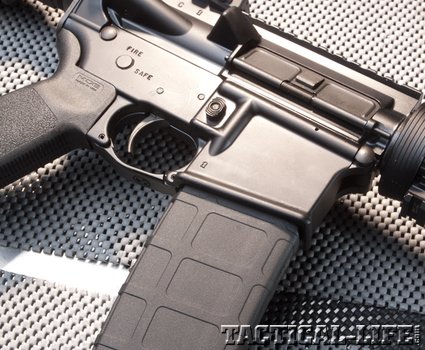 Over the years, the AR-15 has come to be perhaps the most versatile long gun ever invented. It can be configured for nearly any activity—including hunting, warfighting, self-defense, law enforcement, competition or plain old plinking. And as the gun has evolved, many of the original parts have been redesigned by a number of manufactures to improve performance or the interface between man and machine.

Colt secured the first contract to build the AR-15 for the U.S. Government back in the mid-1960s. The company was involved in many of the design advancements since then including the development of the flat-top upper receiver. One of the many other companies involved in advancing the design and versatility of the platform is Magpul, which has more accessories and parts to enhance the AR-15 than can be listed here. Magpul is one of the most successful of AR-15 innovators and Colt was well aware of that fact when it decided to improve on the LE6920 Law Enforcement Carbine by replacing some of the standard GI parts with Magpul substitutes. But Colt went a step further and chose to replace the standard handguards with a Troy Industries railed handguard that features M1913 rails on all four sides along with four quick-detach sling sockets at the front and rear of the side rails. Those changes, along with the flat-top receiver, make the gun extremely versatile.

In some jurisdictions hunting at night is legal, and with the railed handguard it is easy to attach a simple polymer flashlight like one of the many from SureFire. If the object that needs to be shot is a felon and the gun is being used by a law enforcement officer, SureFire and a number of other manufacturers offer rugged tactical lights that can be quickly affixed to the handguard rails. 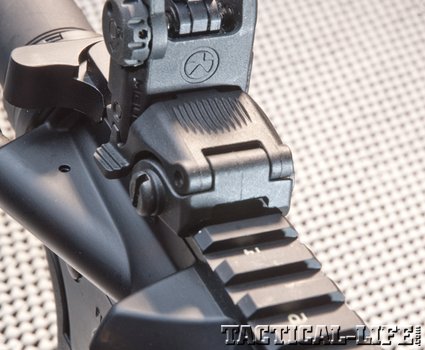 In some states, hunting with a laser aiming device is permitted. Whether in low light or darkness, the laser can be a great aiming aid because it is not only quick, it also allows accurate fire when the user cannot obtain a proper sight picture—something that can happen when the shooter is in an awkward position and cannot get a cheekweld. Obviously the laser has applications for the warfighter as well as the law enforcement officer or homeowner who needs to defend himself.

Besides the Troy Industries handguard, Colt supplies the gun with a Magpul RVG (Rail Vertical Grip) that is another very useful accessory when attached to the rails. To protect the rails that are not used, three rubber ladder-style rail protectors are provided. Additionally, each rail slot is marked with a number so that if an accessory is removed for cleaning or storage, it can be easily replaced in the same location.

The basic gun, the LE6920, is a solid performer even without the additions. Out front, it sports an A2 birdcage-style flash suppressor that also dampens muzzle rise. It is threaded to a manganese phosphate finished 16-inch barrel that is rifled with a 1-in-7-inch right-hand twist and is chrome-lined just like the ones on the military versions. It even has the M203 Grenade launcher cut that is more for looks than function on a non-military weapon. Solidly pinned to the barrel is the front sight base which has an F marking to indicate it is the proper height for a flat-top carbine. It features a bayonet lug and sling swivel, located beneath the barrel. Working in conjunction with the sling attachment slots on the buttstock, the swivel provides a place to attach the web carrying strap Colt supplies with the gun.

There are those who think that a stationary front sight base will interfere with a magnifying optic and that for this reason a fold-down front sight is superior. That just isn’t so. In most cases, the front sight will not even be visible in the scope and if it is, it will be just a blur. And experienced shooters simply ignore the front sight when using a red dot sight—unless the red dot malfunctions in which case the front sight is immediately available as a back up to be used in conjunction with the viewing window of the red dot that functions as a very large rear ghost ring sight. Additionally, the solid front sight is sturdier than a folding sight.

The flat-top upper receiver is black hard coat anodized to match the finish on the lower receiver. Each slot on the top rail is marked with a number so that any sighting equipment can be removed and quickly replaced in the same spot. Colt has added a windage adjustable polymer Gen 2 Rear MBUS (Magpul Back Up Sight) that has a large and small aperture to facilitate both quick target acquisition and precision aiming. Both are in the same plane so once the gun is zeroed, the point of impact does not change when flipping from one aperture to the other. The sight can be stowed in the down position and instantly raised by spring power when a lever is pressed.

The lower receiver is marked with Colt’s logo, M4 CARBINE and CAL.5.56MM on the left side of the magazine well. Above the trigger the receiver bears the inscription COLT’S MFG. CO. LLC HARTFORD, CONN. U.S.A. Even though the gun is marked as an M4, it is not a select-fire gun. This direct gas impingement carbine has a two-position safety with fire and safe positions instead of the military selector switch. 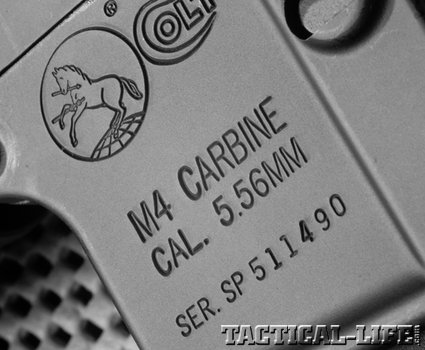 Another Magpul accessory provided is the MOE Trigger Guard which instead of being straight and capable of being swung out of the way to accommodate a gloved trigger finger, is slightly bowed to provide more room and is permanently pinned in place. However, it does have an extension that covers the annoying gap between the grip and the triggerguard found on unmodified models that can abrade and cut the middle finger when supporting the gun with one hand during reloads or if forced to shoot one handed. That is a welcome feature.

Replacing the standard A2 pistol grip is the nicely textured, slip resistant Magpul MOE Grip that has a longer trigger reach which is preferred by some shooters. The grip is equipped with a compartment to securely store various small items. Colt also provides a 30-round Magul PMag that worked perfectly.

The military 1.14-inch diameter receiver extension, or buffer tube, is firmly attached by a properly staked castle nut. Inside is an H or heavy buffer that contains one tungsten and two steel weights to help ensure proper function by slowing down the cyclic rate, reducing the chances of light primer strikes. The buffer tube supports another Magpul accessory, the MOE Carbine Stock that adjusts to fit shooters of various statures. The butt has a non-slip rubber pad that is not needed for recoil, but does reduce slippage when the gun is shouldered. 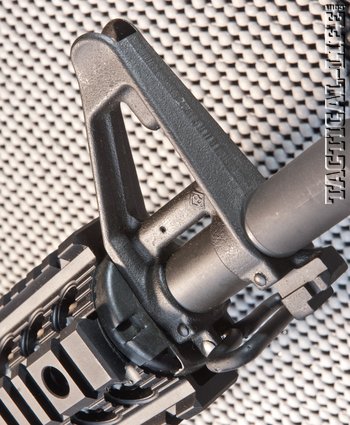 The all important bolt carrier group is standard military grade with a manganese phosphate finish. The carrier and properly staked gas key are both chrome-lined. Marks on the bolt indicate it has been magnetic particle inspected, and the extractor is installed with an extra power spring and black insert to improve function. Also to improve function, the gun has M4 feed ramp cuts that were designed to reduce stubs during feeding, a problem that cropped up during the development of the M4.

The military single-stage trigger broke at about 7.5 pounds with only a bit of take up. It was actually a better trigger than I’ve encountered on many other ARs and was certainly not a hindrance to hitting the target. The gun proved to be accurate, whether off the bench using a Leupold 1.5-5×20 MR/T scope or in offhand drills using iron sights or a Trijicon SRS red dot sight. Groups at 100 yards were entirely acceptable for about any task this versatile gun could be given.
With the flexibility this gun offers, it should appeal to those who carry guns for a living and are sworn to protect the public as well as the individual who needs a solid performer for self-defense. It would also make a great hunting gun or serve well for an exciting atmosphere on the range.