by Massad Ayoob
in Guns, Handguns
0

Built for harsh use and high round counts, Colt has packed the Combat Unit Rail Gun in .45 ACP with plenty tip-of-the-spear features for today’s warriors.

“Colt .45 automatic.” For shooters of my generation, that phrase just has a ring to it. When I got into handguns, it was a term used more often than “1911,” perhaps in part because Colt was pretty much the sole commercial manufacturer of 1911-style pistols then. And yes, I know, the Gun Grammar Police will cry, “It’s a semi-automatic!” But, oddly enough, it was Colt who stamped the word “automatic” right on the slide, and the term does properly describe the feeding mechanism if not the firing mechanism. The company’s latest 1911 is the Colt Combat Unit Rail Gun, which is available in both 9mm and .45 ACP, and I got my hands on the latter for testing. 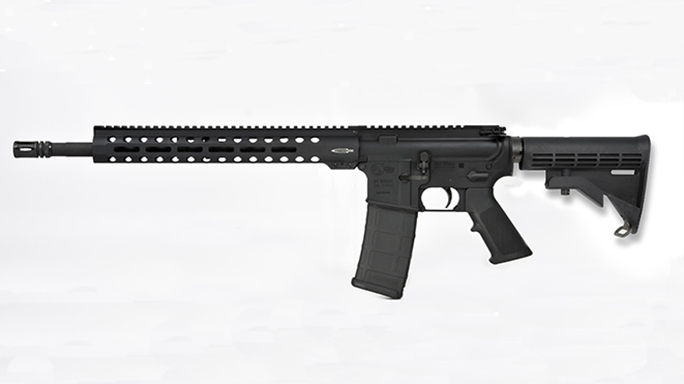 Out of the box, the first thing I noticed was that the pistol did indeed have “GOVERNMENT MODEL AUTOMATIC CALIBER 45” right there on the slide for all to see. The Combat Unit Rail Gun has a business-like flat gray finish on its stainless steel slide and frame. Like Colt’s other Rail Guns, the dust cover features a sturdy Picatinny rail. Within the slide is a 5-inch National Match barrel, and a dual recoil spring is installed on John Moses Browning’s short spring guide, ensuring this 1911 is easy to take down for cleaning and maintenance.

The pistol also comes with a beavertail grip safety complete with a “speed bump” to assure that it works even with a less-than-perfect grasp, and the triggerguard is slightly undercut where it meets the frame to allow your hand to come up a little bit higher for more recoil control. The gun also features Colt’s Series 80 firing pin block to render the pistol drop-safe.

The grip panels are made of G10, making them impervious to weather, with the original-style “diamonds” around the grip screws in homage to the first Colt 1911s, and the iconic “Colt” lettering writ large in bas-relief. The left panel is relieved to give a right-handed shooter’s thumb better access to the standard-sized magazine release button. The frontstrap and mainspring housing both feature 25-lpi checkering, which combines with the texturing on the G10 grip panels to provide extremely good traction. The Combat Unit Rail Gun also comes with an extended, right-side-only thumb safety. On my test gun, the thumb safety was crisp, requiring firm pressure to activate it, and only one shooter who handled the test gun had to readjust their grip to use the safety.

The long trigger is solid with no external adjustments. On my test gun, the pull weight was a tad heavy for the breed, averaging 6.61 pounds. It had very slight take-up, then a smooth roll before breaking. Some backlash was palpable, but it did not seem to affect my accuracy downrange.

For targeting, the pistol has a Novak tritium front sight and a plain black Novak LoMount Carry rear unit with a large square notch. The front and rear slide serrations are angled in the fashion Colt introduced circa 1957 in its National Match/Gold Cup series, with the lines parallel to the grip panels, which I always thought gave a wee bit better grasping surface to the hand. Finally, the Combat Unit Rail Gun comes with a stainless eight-round magazine.

To test the Combat Unit Rail Gun’s accuracy at 25 yards, I fired five-shot groups from a Caldwell Matrix rest on a concrete bench. I always try to use the three most popular bullet weights for the caliber, which are 185, 200 and 230 grains in .45 ACP.

Federal’s 185-grain Hi-Shok JHPs are known for being light on recoil and expanding well when fire from a full-length 5-inch barrel. The best five-shot group with this load measured 2.8 inches, with the best three clustering into 1.4 inches. The latter is in line with what I’ve seen from earlier Colts equipped with National Match barrels when run from a machine rest. The load also lived up to its reputation for being very mild in terms of recoil.

Despite being relatively new, Sig Sauer’s Elite Performance V-Crown JHPs have earned a reputation for good accuracy, and I tested the 200-grain load—the same weight legend says John Moses Browning specified in his original concept for the .45 ACP cartridge. The Sig ammo lived up to that budding reputation here with the tightest grouping of the test: 2.15 inches for five shots and 0.95 inches for the best three.

It only seemed appropriate to test the Colt .45 with Colt-brand .45 ACP ammo in the most traditional style: 230-grain FMJs. With this ammo, the whole five-shot group measured 4.7 inches, but I’m almost certain I caused a flyer, as the best three shots clustered into just 2.05 inches at 25 yards. 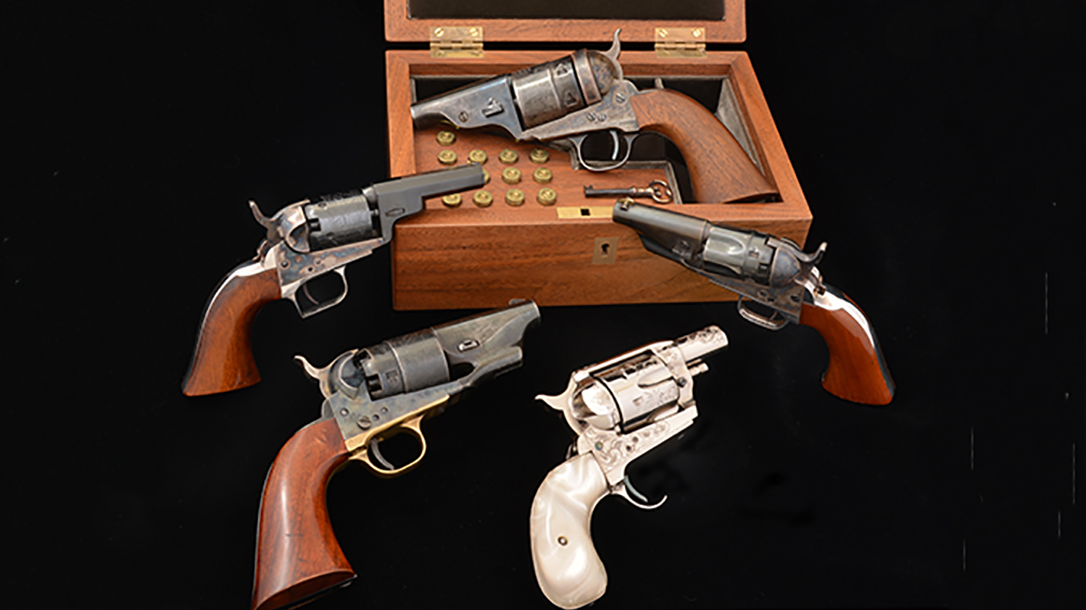 Both of the relatively light JHP loads shot high by 3 or 4 inches and a little bit to the left. The 230-grain FMJs were pretty much centered for both elevation and windage, which tells me that Colt, logically enough, sighted the Combat Unit Rail Gun in at the factory for standard-velocity 230-grain ammo.

Some folks think a full-sized, all-steel .45 is too big and heavy for concealed carry, but a lot of us don’t. Having carried this format concealed off and on for my entire adult life, I found the Colt perfectly comfortable in an old Bianchi X15 shoulder holster under an unbuttoned Columbia-style sport shirt. Why the shoulder rig? Because neither of my Kydex holsters for railed Government Models fit this gun; the rail area protrudes just a little too much on this model. I’m told that Raven Concealment System makes a Hackathorn Signature hip holster for this particular pistol, but I didn’t have one on hand for testing.

One rig I did have that fit perfectly was a Michaels of Oregon duty holster. It seemed fitting to shoot a police qualification with it, so I chose the NRA Police Service Pistol course. My target was a Birchwood Casey Shoot-N-C B-27 insert on a cardboard backer, and I used an assortment of 230-grain FMJs for ammo.

At 3 yards, I started with my hand clear of the strapped-in pistol, then drew and fired only with my strong hand. The big Colt put all six bullets through the 10 ring, but I rushed a bit, and only four of those shots were in the tie-breaking center “X” oval. Firing from a strong “punch” stance, the recoil was barely noticeable.

On the 7-yard line, I drew the gun, obtained a two-handed stance, fired six shots, reloaded and fired six more—all within 20 seconds. With a few seconds to spare, I was able to keep all 12 of my shots in the center “X.”

Next, I moved to 15 yards to perform the same drill, but things got a little awkward. Farther back, it was more difficult to align the black sights with the black target center at that distance, and I had only the tritium insert up front to guide my eye. All of my shots stayed within the center-mass of the target, but three of the 12 shots drifted out into the 9-ring, with two in a northeasterly direction.

The result was three hits in the 8-ring and some more in the 9-ring. In the end, I earned 462 points out of 480 using competition scoring, or 96.25 percent. That’s not my best by any means. But in qualification mode scoring, the NRA lists anything inside the 8-ring as being five out of five possible, so in qualification mode, my score was 240 out of 240, or 100 percent.

I don’t blame the gun for the 18 points I lost in competition mode; I chose my target color poorly. Also, I would have really liked a couple more tritium inserts in the rear sight to create a three-dot aiming picture as a fallback option.

Throughout the range test, over hundreds of rounds, from wide-mouth JHPs to round-nose FMJs, the pistol never bobbled once. Back in the 1970s and 1980s, most of us who used Colts professionally at the time considered them to be starting points for custom gunsmiths, as they had to have their chambers throated to feed most hollow points. Thankfully, that problem has been a non-issue for some time now. Today’s Colts are well made and trustworthy.

The MSRP might seem high, but this is a top-of-the-line 1911 built for harsh use and high round counts. You’re getting lots of value for the money. Mark Redl, who was shooting Colts long before he joined the Colt factory team and took a management position for the company, has won major honors with the Combat Unit Rail Gun. That’s quite the endorsement.

This article was originally published in ‘The Complete Book of Handguns’ 2017. For information on how to subscribe, visit outdoorgroupstore.com.