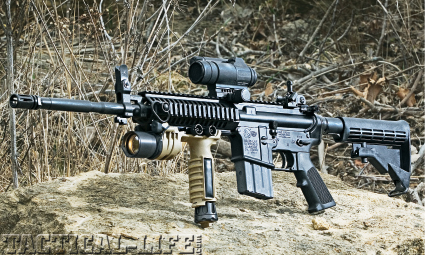 There are various manufacturers today that produce quality AR15 type rifles, often with various enhancements. Nevertheless, there is still a cachet to those rifles that bear the rampant Colt. Colt originally developed the M16/AR15 and Colt Defense has continued to supply rifles and carbines to the armed forces and law enforcement agencies. That’s why I was enthusiastic after learning of Colt’s new LE6940.

The LE6940 owes its origins to the military SCAR (Special Operations Forces Combat Assault Rifle) program in 2004. Colt submitted two carbine types for the program. Type A was an impingement design, basically the type of AR15/M4 operating system, which has been in use for decades. Type C was a piston design. Many readers are asking themselves, “What was Type B?” Type B was a direct gas system carbine with an ARMS SIR (Selective Integrated Rail) system and ARMS 40L low profile BUIS (back-up iron sight). Both Type A and C Colt SCAR designs incorporated a one-piece upper receiver machined from a single 7075-T6 aluminum forging, keeping the carbine light in weight.

Since most military and LE operators add an aftermarket rail system, Colt decided to incorporate their own system that eliminates many of the problems with aftermarket systems. Some add-on rails add weight, not to mention cost, to the carbine. It is also difficult with some rail systems to maintain zero for the optical sight.

Additionally, the rail system may trap heat within the handguards or even transfer heat back into the receiver. When the weapon is fired a lot, some rail systems have been known to work loose as well. The LE6940’s rail system was designed to eliminate these problems, while keeping weight below that of a standard M4 with aftermarket rails. Too many M4s end up becoming heavy and dead in the hands, thus losing much of the carbine’s appeal.