One of the holy grails of AR manufacturing has been making one lower for both 7.62mm- and 5.56mm-based platforms. For many years, our special operators of every ilk have asked for a “kit” that allows them to change calibers, barrel lengths and sighting systems to adapt to the mission at hand. Most operators have accomplished this so far by using two modular systems—one 5.56mm and one 7.62mm platform—that allow for most of these changes. The ideal, however, would be having the ability to use the same lower receiver for both.

This would have a secondary benefit for the police world. Law enforcement is almost always low on funding. The more an agency can do with less, the better.

Although different missions can require different calibers, it’s rare for an agency to give an operator several weapons. Far too often, the solution is to simply compromise on what officers need. Utilizing one lower receiver for both large and small calibers could be advantageous—a 7.62mm rifle could be issued to an observer on the team, for instance. Given a team’s typical multi-tasking, they could simply swap out uppers to 5.56mm for entry operations or other uses. As a side benefit, those in need of other calibers based on the 5.56mm cartridge, such as 6.8 SPC or 6.5 Grendel, could use the same lower receiver. The concept is valid, but the trick is making it work.

Although similarities certainly exist between the two, upper receivers based on the 7.62mm NATO cartridge require more length. The controls are the same, as is the buffer tube (in most instances), and even trigger mechanisms. Lower receivers on this platform are just housings; the upper receiver deals with chamber pressures and the like. That left adapting the 5.56mm upper to fit the larger lower. There have been several attempts—most were either cost-prohibitive or simply failed to work. I’ve seen plenty of these systems on the drawing board, but many never make it past that stage. It seems one company, Colt, has come up with one successful adaptation—the LE901-16S. 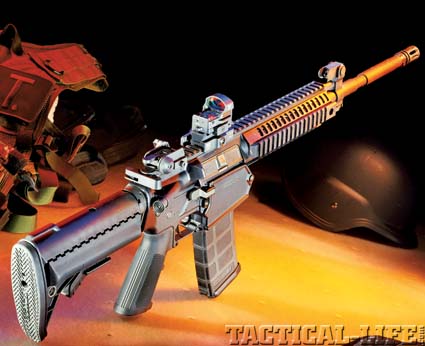 Vltor’s durable IMod buttstock is adjustable, offers storage space, and provides a good cheekweld for use with optics. 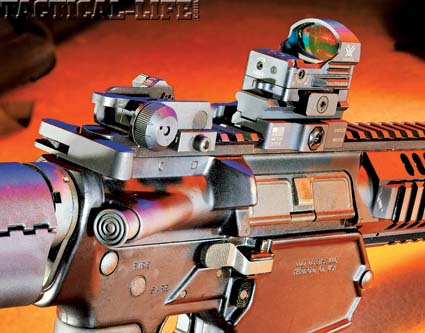 In order for this system to work as a multi-caliber rifle, you start with the 7.62mm version, the direct-gas-impingment LE901-16S. The heart of the system is the lower. Colt has done a truly fantastic job here. The magazine catch and bolt release are completely ambidextrous. For right-handers, the magazine release is in the usual spot. The bolt release is slightly to the rear and higher up than usual, making it perfectly situated. This facilitates reloading and makes it much easier for a right-handed shooter to lock the bolt open without removing the control hand. For left-handers, the magazine release is at the bottom of the triggerguard, with the bolt release in its usual place.

The safety is reversible, as many prefer it this way, even left-handed shooters. If need be, an operator can switch its side. Either way, these controls facilitate the weapon’s operation from either side, with either hand, without regard to the shooter’s orientation.

A mil-spec trigger was provided with its commensurate creep, yet it had a crisp break. Many prefer these triggers for duty weapons, but an aftermarket trigger should be able to drop right in. The pistol grip is a standard A2 design, but the lower will also accept aftermarket grips that don’t have an upswept palm swell. The buttstock is a Vltor IMod with a four-position buffer tube. This stock has push-button swivel mounting on either side as well as battery storage. Lastly, the lower is proprietary—it does not accept other 7.62mm-based upper receivers, at least none in my inventory. The front of the receiver is cut to accept the conversion kit designed to fit mil-spec Colt 5.56mm upper receivers.

Colt has built this upper receiver as a monolithic design. The forend and receiver are all one piece. The four Picatinny rails are nicely done—not too wide, and more importantly, not too sharp. Rail covers are provided for those who require them. There is a flush cup for sling swivels at both the front and rear of each side. The gas block contains an integral folding front sight. The rear sight is a Colt model that is similar to your typical Troy Industries Battle Sight.