0
SHARES
28
VIEWS
Share on FacebookShare on Twitter
I think users of AR15 carbines, whether law enforcement or civilian owners, have a dilemma in deciding on accessories. The AR15 carbine’s greatest appeal is that it is light and handy. Adding too many accessories can make the same carbine heavy and unwieldy. Often, in fact, the AR15 becomes heavier than many .308 carbines. I am somewhat conservative about adding accessories to my AR15s. However, there are certain ones I do consider highly useful.

I find the standard AR15 carbine telescoping stock adequate, but I prefer a stock upgrade. I also like accessory rails to give me the option of adding a compact yet effective light. Finally, I like an optical sight. These accessories will add weight, but they also add a great deal of versatility to the carbine especially in CQC (Close Quarters Combat) usage. With care, one can still keep overall weight of the carbine manageable. 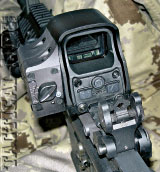 A while back, I decided to enhance a Colt M4 LE carbine I’d been using for years by adding accessories. I think my incentive came when I was at Blackwater North a few months ago and had a chance to examine Vltor’s EMOD (Enhanced Mod Stock). I also decided to use Vltor’s CASV (Component Adaptor System 5) handguard system. This decision was influenced by the fact that the CASV system is quite light, adding relatively little to the weight of the carbine.

Operational Upgrades
Vltor EMOD Let’s discuss the EMOD since that’s what initially got me interested in Vltor products. The EMOD with its rubber buttplate is slightly wider and longer at the toe than a standard M4 stock and has a slight negative pitch, which helps make the carbine handier when transitioning from the ready position. The longer length of EMOD also can be an advantage for establishing eye relief when used on some scoped rifles (i.e. designated marksmen type rifles).

For use with body armor or by smaller operators, the EMOD may still be adjusted for comfort. I chose the Clubfoot EMOD, which allows the support hand to better position the stock against the shoulder when shooting prone. The Clubfoot EMOD also has multiple battery compartments. There are two weatherproof tubular compartments, one on each side of the EMOD, as well as an additional waterproof compartment with a hinged door in the clubfoot portion of the stock. The EMOD is available in flat dark earth/tan, green or black. Weight is 14 ounces, which aids balance and actually makes the carbine feel livelier in the hands. Note: Anyone considering installing an EMOD stock will need a Mil-Spec receiver extension tube.

Vltor CASV-EL The CASV-EL (extended length) rail system on my carbine has proven an excellent choice. The CASV-EL system was originally developed for U.S. Navy EOD (Explosive Ordnance Disposal) teams and will fit any M4/AR15 carbine flattop receiver with carbine-length gas system. A really appealing feature is how easily the CASV-EL installed on my M4. It comes with easy to follow instructions and requires few tools. I will note that on an M4 with the sight tower sling swivel, the swivel will have to be removed.

The CASV-EL is designed so that the user can install rails to fit his specific needs. Each CASV-EL system comes with two 2-, two 4- and one 6-inch rail sections. These may be installed on the sides or bottom of the system as desired. On many rail systems it is necessary to install rubber covers to protect the support hand from the rails; however, this is not the case with the CASV-EL since the aluminum body of the system allows a comfortable hold unless the longer 4- or 6-inch rails are installed where the hand will rest. The extended rail on top of the CASV-EL allows mounting of night vision or other special optics in addition to the optical sight.

Vltor Scout Mount I like a tactical light on my carbines but I do not like a complicated mounting system for the light; hence, I chose the Vltor Scout Mount which is a simple, tough system that allows a SureFire light to be mounted to a rail. I don’t like pressure switches in general for my gun mounted lights, so I mounted the Vltor Scout Mount/SureFire combo so I can hit the light button with my support hand thumb by just sliding it slightly forward on the handguard. I don’t advocate this as the best tactical way to use a carbine light, it’s just the one that works for me.

TangoDown BattleGrip For my pistol grip, I chose TangoDown’s BattleGrip. I have used the BattleGrip on other carbines and been very happy with its com-fort and ergonomics. Since I will be using an illuminator and a sight that take batteries, I also chose the BattleGrip to gain additional battery storage.

Troy DiamondHead For my auxiliary rear sight, I chose the Troy Industries DiamondHead sight. This flip-up sight has two sizes of diamond-shaped aperture. The DiamondHead allows the front post to be centered very quickly for CQC usage and leads the eye quickly to the center of the diamond via posts around the diamond. Since I view auxiliary sights primarily for usage less than 50 yards, I find the DiamondHead a good choice.

Since I was setting the Colt M4 up primarily as a CQC carbine, which by my definition means that it is at its best at ranges under 100 yards but it can be used at longer range if necessary, I decided that I would equip it with a laser. However, I was still trying to minimize weight and clutter on the rails. Since it was basically a given that I would install an optical sight, Laser Devices’ EOLAD proved the perfect choice. The EOLAD combines an EOTech L-3 Holographic sight with a Laser Devices’ laser.

EOTech EOLAD There are actually six versions of the EOLAD combining visible and infrared lasers or with one or the other individually. For civilian sales, the EOLAD-1V with visible aiming laser would be the choice. That’s the one I mounted on my M4.  Versatility and size were my two primary considerations. The EOLAD-1V is 5.5 inches long, 2.4 inches wide and 2.4 inches high. Weight is 16.8 ounces with battery installed.

The EOTech has developed a reputation for standing up to hard combat usage. I purchased one from a vet who had carried it on two tours in Iraq. It was scuffed, beat-up and missing a screw, which I replaced, but it works just fine. The EOLAD retains that toughness and is also waterproof to 10 meters.

The laser has two power settings to allow force on force training safely using the lower setting. The higher power setting is intended only for operational usage. There are both activation and low battery indicating lights. The laser and EOTech are fully adjustable for windage and elevation. Note: each has to be adjusted separately; however, I found that I could zero the EOTech, then center the laser in the hologram to get them close to co-sighted. Since I wanted the EOTech zeroed at 50 yards and the laser at 25 yards, I made some slight adjustment in the laser after shooting a group.

The EOLAD has quite a few controls. Located at the rear of the EOLAD are the standard EOTech on/off brightness controls plus the on/off/brightness controls for the laser. On the side of the laser is a button switch for momentary or continuous laser operation (one tap for momentary and two for continuous). There is also a 10-inch remote cable pressure pad switch for those who like that system. The EOLAD operates on two 1.5-inch AA batteries. Spare batteries for the mounted EOLAD and SureFire light are both carried in the Vltor EMOD stock.

Range Time Wrap Up
I chose to zero the EOTech portion of the EOLAD at 50 yards with SS109 ammunition for a couple of reasons. First, I do quite well with the EOTech hologram at 50 yards or less, but do not shoot it as well as some other optical sights at longer ranges.  Therefore, I decided to zero primarily for CQC usage. I did shoot some 100-yard groups with the EOTech and kept them less than 2 inches and around 1.5 inches on a couple.

As a result, I would feel confident at engaging a man-sized target to 100 yards or even 200 yards with the EOLAD. As I mentioned earlier, I sighted the laser portion of the EOLAD for 25 yards as I have found this to a good compromise for shooting at longer or shorter ranges. Others might choose a different zero.

With all of the modifications, my M4 still weighs just less than 9 pounds with light and EOLAD mounted but without a magazine. When shooting plates at ranges between 15 and 35 yards, the carbine handled very well and the EOTech holographic reticle allowed me to move among targets quickly.